Was this really the best tag line they could come up with?

AVA, played by Jessica Chastain, is an assassin, with a problematic background and serious unresolved personal troubles . She’s also been marked for “retirement”, the sudden kind. More to the point (lessness), ‘Ava’ is Reviewerese for “How damn many more times do we need see this?” *

Primed by an excellent opening montage over the credits, charting Ava’s life progression, and given that the estimable lead actress always delivers, this 2020 actioner might tease you into lolling away 96 minutes to see her clobber her way toward a finale that leaves an opening for a sequel. Franchisima femme de kick-derriere. 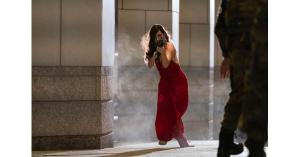 By the time the first studiously over-choreographed mop-the-floor-with-a-dozen-guys scene has ended, and before the third paragraph of coy-velt trade lingo has been given robotic paycheck recitation by John Malkovich, you realize you’ve been here so often that you should qualify for a Swiss bank account, four passports and a personal physician who can quickfix your sixteen latest fractures and contusions.

Ava’s home turf hassles include huffy history with her mother, played by Geena Davis, (who an eon ago—1996—played a lithe lady killer in The Long Kiss Goodnight), while her workaday woes stem from shadow boss Colin Farrell (sporting a daft haircut). Directed by Tate Taylor (who worked with Chastain on The Help), the actors ply efficient craft, but they’re sucker-punched by a dead-horse script from Matthew Newton. The screenplay is not only gasping on fumes story-wise, but is stocked from smashed toes to bloody nose with vague blame-tossing arguments among Ava’s freeze-dried family, and the back/forth jabber with her professional colleagues is so laden with circling euphemisms that it sounds like a self-help seminar (the kind that takes a thousand buzz words and $2200 to get to “Be Yourself”). Apart from idly observing how the actors squeeze the lemon, there is no emotional involvement or payoff.

The brutal fight scenes are played as if something like them could actually occur: as such they come off as absurd. Stuff like John Wick works because its overkill is a gag. Drivel like Ava is played straight: a cyborg couldn’t take this kind of physical punishment. Every blow could fell a rhinoceros (or stun a Balboa). **

The eruption of the corona plague saw that only Hungary played it in theaters, so the box-office gross just nicked $3,200,000. Streaming services were left to pick up whatever slack. 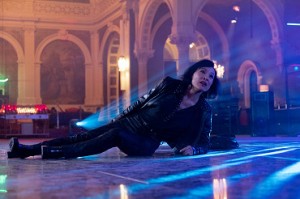 *  Been there, kicked that (to death, already)—-Salt (Angelina Jolie), Atomic Blonde (Charlize Theron), Haywire (Gina Carrano), Colombiana (Zoe Saldana), Kill Bill (Uma Thurman), Hanna (Sairse Ronan). Each of them are better than Ava. We’re all for Girl Power, Maxed (cue Michelle Yeoh, Jennifer Lawrence, Halle Berry, Sigourney Weaver, Margot Robbie), and Deadly as Sexy summons worship of Diana Rigg, Honor Blackman, Luciana Paluzzi, or further back, Lana Turner, Joan Bennett and all the un-fortune cookies from their era. Heck, Scarlett O’Hara shot a sneering Yankee point-blank in his ugly puss. But, like the punches and kicks exchanged in this sort of retread, vicious enough to crack the Earth’s crust, there is such a thing as a saturation point.

** Writer Matthew Newton was set to direct, but his extensive and repellent real-life history of domestic violence and assorted assault saw him replaced by Taylor.

***—Chastain: “I love my family, but they don’t understand what it is to be an actor, so an important relationship is with my best friend, a fantastic actress: Jess Weixler. We were roommates at Julliard and now we live 10 blocks from each other. I make an effort because whenever I am having a hard time, I always get a text from her. She is a life saver. Jess and I have been friends for over 10 years. I would never do anything that would get in the way of her getting a part. No-one is going to pit us against each other.”

Jessica’s a class act, to be sure, and a great actress. She just picked the wrong script (and writer) here (she also co-produced). To see her play a real-life heroine in a really good movie, pick Molly’s Game.

One thought on “Ava”