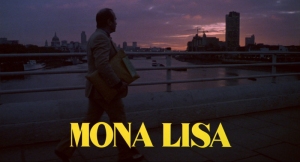 MONA LISA smiled on the great force-of-nature named Bob Hoskins by giving the 44-year-old natural his sole career Oscar nomination. Bob lost that year’s mantlepiece/doorstop for Best Actor of 1986 to veteran Paul Newman, who’d been passed over six times, for his fine work in The Color Of Money. More on the prize jive below…*

“She was trapped. From the first time he met her, she was trapped. Like a bird in a cage. But he couldn’t see it. Well, he liked her too much. And he was the sort who couldn’t see what was in front of his face. And there she was, in pain. When you’re soppy about someone, well, you can’t see things like that, can you? And there he was, the soppy sort. Oh, she had faith in him. She believed in him, and he had a lot of hopes for her. But, there was love. Yeah, she was in love all right. She really was. But not with him…And that’s the whole story.” 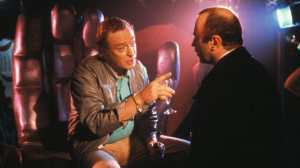 Small-timer ‘George’ (Hoskins) did his stand-up bit of seven years in stir for his mob boss ‘Mortwell’ (Michael Caine), but now that he’s out he needs a job. His marriage is shot, he hopes to reconnect with his teenage daughter, and he’s living in a garage with genial buddy ‘Thomas’ (Robbie Coltrane). At least owns a classy car, a 1962 Mark II Jaguar, which he uses when Mortwell tosses him a bone as chauffeur for high-end call girl ‘Simone’ (Cathy Tyson). Initially hitting it off like a stray cat and a wild dog in a sack, the polar opposites gradually attract, even if to painful, ultimately dissimilar ends.

Directed by Neil Jordan, co-written by Jordan and David Leland, specifically for Hoskins. Desperation and hope key the clumsy gallantry of George and the despoiled longings of Simone. Beyond their stamina and nerve as survivors, what’s most affecting about each is the bitter truth—reflected not in their faked-up attire, but in their dispirited faces—that pretend posh finally amounts to futile self-delusion. Caine’s role is small, but he paints a believable portrait of a coldly practical type of evil. Cochrane sketches a different type of practicality (his mixed with clever if goofy ideas) and provides welcome moments of understated humor. Tyson, 21 in her debut, is striking, capturing Simone’s fire & ice determination: regrettably her film career didn’t take off, but much TV and theater work ensued. But the show belongs to Hoskins, filling George with a raw emotional truth, vibrating in an immediacy that makes you feel like you’re in the room with him, in his skin, at once tough and thin, bruised and resilient. Hoskins left us too soon at 71, but he left behind much fine work: along with his less-kindly gangster in The Long Good Friday, this is him at his best.

The seamy underside traversed by these characters is a sad and ugly slice of life (nonetheless beautifully shot by cameraman Roger Pratt (Brazil, Chocolat, Troy), recalling other descents like Taxi Driver (naive loser idealizing and trying to save someone ‘fallen’) and Hardcore (physical search through human mire for a missing person), but this story has more of a wounded, beating heart.

* Newman was easily very good, updating his ‘Fast Eddie’ character from 1961s The Hustler to Martin Scorsese’s The Color Of Money (I’m not a fan of either movie: heresy, we realize), but his Oscar was a lifetime achievement makeup gift, having been passed by for much stronger work, not least in Cool Hand Luke and The Verdict. Hoskins—his burly look and brusque manner about as far from Newman as London is to Los Angeles—should have been recognized earlier, in 1980, with a nomination for his ferocious hoodlum in the classic The Long Good Friday. His stellar turn in Mona Lisa could also have shared an ’86 trophy with James Woods frantically hustling journalist in Salvador. But no one asked me, so I had to bide my time, waiting until a rainy night in the middle of a plague to finally set the record straight. Man’s gotta do, etc…. 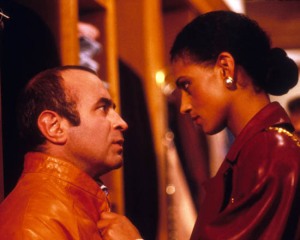