T-MEN, another of 1947s bumper crop of film noir, came in 79th at the boxoffice, yet the $4,300,000 gross still notched a solid win: it had only taken $450,000 to produce. The taut 92-minute exercise also drew good reviews and an Oscar nomination for Best Sound. More notably, it brought the artistry of cinematographer John Alton together with the directorial skills of Anthony Mann: they’d collaborate to great effect on five more pictures, then continue their individual careers to acclaim.

‘Dennis O’Brien’ (Dennis O’Keefe) and ‘Tony Genaro’ (Alfred Ryder), agents for the U.S. Treasury, pose as hoodlums to go undercover on a counterfeiting case that ranges from Detroit to Los Angeles. The payoff is big for the criminal ring, the stakes are life & death for the lawmen. 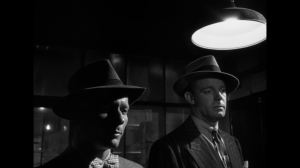 “These are the six fingers of the Treasury Department fist. And that fist hits fair, but hard.”

Written by John C. Higgins, the picture is done in semi-documentary style that was in fashion at the time, showcased in fact-based pictures like The House On 92nd Street, Call Northside 777, The Naked City, I Was A Communist For The F.B.I. and Chicago Deadline. They worked the in-vogue noir milieu to extol various government agencies while getting away with figurative murder using the genre’s penchant for violence to heighten thrills. Have cake, eat it: public service fodder with a flavoring of mean. 1947’s dark noir output wasn’t just plentiful, it was plenty nasty (Kiss Of Death, Brute Force), and Mann’s entry was advertised with taglines like “The raw, savage, screen-searing story of the Treasury’s tough guys!” The director was busy that year, preceding this job with Desperate and Railroaded!

The prologue pays homage and issues a warning: “The United States currency and the credentials of the Treasury Department shown in this film were photographed by special permission of the Secretary of the Treasury. Further reproduction of said currency or credentials in whole or part is strictly prohibited.”  Fine, now that you’re scolded not to pass phony fives, relax and enjoy all the punishment dished out, including Wallace Ford’s sleazy ‘The Schemer’ getting parboiled by thug Charles McGraw in a steambath.

The stentorian narration (done by Reed Hadley) is dated, but director Mann’s handling is sharp, and the black & white camerawork from Alcott is high quality. O’Keefe makes a solid lead. The script does offer an unintended guffaw with the line “Did you ever spend ten nights in a Turkish bath looking for a man?” 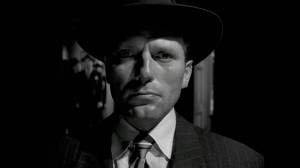 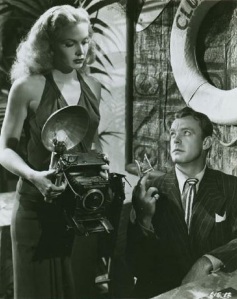 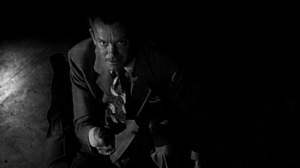