FEAR AND LOATHING IN LAS VEGAS should come with a suggestion tag: “Drop Acid. Let it come on. Then watch.” If Hunter F. Thompson’s anarchic 204-page reportage rant from 1971 dared you to decipher it between guffaws, then Terry Gilliam’s eyeball & taste assault movie adaptation from 1998 dares you to watch until minute 118 clocks out, provided cringes from excess haven’t already seen you abandon spaceship. The thing is that, those of us…let’s say–versed?–in the twists and turns of hallucinogenic highways know as gospel from purple experience: they can be either Great or the proverbial “bad”. Or both at once. Hydrate, Martian!

“There he goes. One of God’s own prototypes. A high-powered mutant of some kind never even considered for mass production. Too weird to live, and too rare to die.” 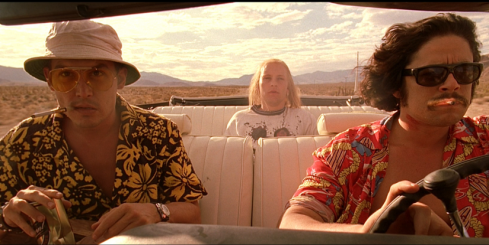 The early 70s. Magazine journalist ‘Raoul Duke’ (Johnny Depp) and his lawyer ‘Dr.Gonzo’ (Benicio del Toro) zoom across the desert from L.A. to Las Vegas, where Duke will do an article on a motorcycle race. Luck has it that there’s a convention in town, the National District Attorney’s Conference on Narcotics and Dangerous Drugs. Whew! What a break, considering Duke & Gonzo’s enhancement inventory: “We had two bags of grass, seventy-five pellets of mescaline, five sheets of high-powered blotter acid, a saltshaker half-full of cocaine, and a whole galaxy of multi-colored uppers, downers, screamers, laughers… Also, a quart of tequila, a quart of rum, a case of beer, a pint of raw ether, and two dozen amyls. Not that we needed all that for the trip, but once you get locked into a serious drug collection, the tendency is to push it as far as you can. The only thing that really worried me was the ether. There is nothing in the world more helpless and irresponsible and depraved than a man in the depths of an ether binge, and I knew we’d get into that rotten stuff pretty soon.”

Depp, idolizing Thompson, spent months with him absorbing the wild Hunter essence, and del Toro went whole-hog (whorfing on 45 pounds) to pull every stop he could as the dangerous Gonzo. Gilliam then filled up the background with happily enlisted support troops. Some were already established as offbeat—Gary Busey (going full-Gary), Christina Ricci, Ellen Barkin; others were promising newbies—Christopher Meloni (having wispy fun as a hotel desk clerk with power), Tobey McGuire, Cameron Diaz; still more just there for the hell of it—Mark Harmon, Lyle Lovett, Harry Dean Stanton, Laraine Newman, Penn Jillette. 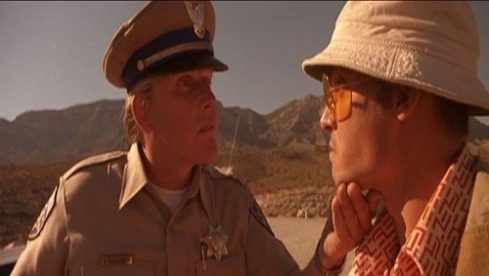 “What Leary took down with him was the central illusion of a whole lifestyle that he helped create. A generation of permanent cripples, failed seekers, who never understood the essential old mystic fallacy of the acid culture: the desperate assumption that somebody, or at least some force, was tending the light at the end of the tunnel. There was only one road back to L.A. – U.S. Interstate 15. Just a flat-out high speed burn through Baker and Barstow and Berdoo. Then onto the Hollywood Freeway, and straight on into frantic oblivion. Safety. Obscurity. Just another freak, in the freak kingdom.”

Visually bonkers, with a good number of laughs from the overall absurdity and the committed (in every sense) maniacal mayhem exuded by Johnny & Benicio–both of whom are terrific—but after a certain point, the ‘point’ is Made, yet the beat-down goes on, and gets harder to justify. By the time the debauchery ends up with the queasy degradation of the waitress played by Ellen Barkin, the ‘truthseeking’ “heroes” we’re stoned into identifying with have lost whatever sheen of “rebel” they roared into town on and just come off like snotty, selfish jerks, or worse—abusive, self-spoiled pricks. People that are merrily high and possessed of wit can be a real hoot, but when they turn sloppy and mean the charm melts away like the promises made by those they mock. “Fuck everyone!” isn’t rebellion: it’s surrender.

Reviews ranged from rhapsodic to revolted, and the nonstop visual overkill, plus the inescapable fact that much of an audience that might’ve enjoyed the weirdness—based on their own shallow gravedig in Dopeville—had no frickin’ idea who Thompson was or why he may have meant something to some slice of spiritually afflicted society in the first place, saw that audiences didn’t flood to the flow. Costing $18,500,000 to imagine, the bum-trip take of just $10,680,000 registered as a whopping flop, 113th place in ’98, a year that saw the laughs-meet-cash dial directed at march-to-doom idiocy like The Waterboy, Doctor Doolittle, Rush Hour and Patch Adams. ** 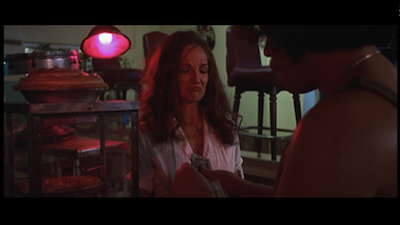 * Over the years, both Martin Scorsese and Oliver Stone made feints at the project. When things finally kicked into gear, Alex Cox started as director, was fired after a few weeks, then Gilliam took over. Gilliam and Tony Grisoni did a fast rewrite of the script Cox and Tod Davies had prepared. Prior to their jumble—while critics dumped on it, there are fans who got a kick out of the maligned 1980 pass on Thompson with Bill Murray, Where The Buffalo Roam.

** To be fair to 1998—‘fair’ to a ‘year‘? WTF have I come to?—there were some ace comedies that drew crowds—Shakespeare In Love, There’s Something About Mary, The Truman Show, Pleasantville–and lest we forget, one that even shouted political anger: Bulworth. OMFG! Wait a damned drug-addled minute-–The Big Lebowski, Rushmore, The Opposite Of Sex...okay, so sickness was alive and well after all. I knew all I had to do was change the music, stand up and move to another room. Now, for the love of Jagger, just do NOT look in the mirror…

“And that, I think, was the handle – that sense of inevitable victory over the forces of old and evil. Not in any mean or military sense; we didn’t need that. Our energy would simply prevail. We had all the momentum; we were riding the crest of a high and beautiful wave. So now, less than five years later, you can go up on a steep hill in Las Vegas and look west, and with the right kind of eyes you can almost see the high-water mark – that place where the wave finally broke and rolled back.”

2 thoughts on “Fear and Loathing in Las Vegas”