OUT OF AFRICA follows the memoirs of Danish author Karen Blixen, who wrote about her 17 years in Kenya, at the time a British colony. In 1937, under her pseudonym Isak Dinesen came the 416 pages of “Out Of Africa”; later in 1960, when she was 76, she delivered a shorter memoir, 4 stories totaling 144 pages titled “Shadows On The Grass”. *

“There’s country there you ought to see… it won’t last long now.”

In 1913, well-off 28-year-old Karen Blixen (Meryl Streep) moves from Denmark to the Ngong Hills, outside the bustling frontier town of Nairobi, Kenya. By the time she returned to Denmark in 1931 she’d been married & divorced to a ne’re do-well Baron, Bror von Blixen (Klaus Maria Brandauer), run a coffee plantation, won over the native Kikuyu tribesmen, delivered supplies to soldiers fighting on the ‘African front’ of WW1, battled lions, endured syphilis, and had a passionate affair with enigmatic hunter-guide Denys Finch Hatton, played by Robert Redford.

“It’s an odd feeling, farewell. There is such envy in it. Men go off to be tested, for courage. And if we’re tested at all, it’s for patience, for doing without, for how well we can endure loneliness.” 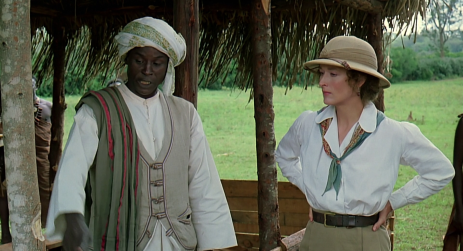 Tiresome scolds always predictably hiss at this type of effort as “Oscar bait”, which is just a pissy way of acknowledging that many if not most of the component parts deserve peer recognition. Handled any multi-million dollar, period-set, star-capped runs at literature that a mass audience could relate to, lately, Mr./Ms./They Poopfizzle?

On the Guild-gild front, it won Academy Awards for Best Picture, Director, Screenplay, Cinematography, Music, Art Direction and Sound. Nominations went up for Best Actress (Streep), Supporting Actor (Brandauer), Costume Design and Film Editing. Domestically a gross of $87,100,000 put it #5 for the year, with another $140,443,000 earned abroad. 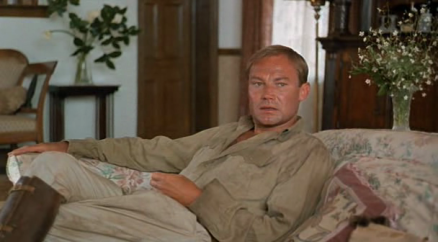 Streep’s nomination was her 5th, locking down Blixen’s upper-class, civilized Danish accent to perfection, and resisting any temptation to overplay the heroine: a less-keen actress may have done that to milk audience approval in a day when attitudes toward empowered women were, if not a given, certainly more accepted than they were back in Blixen’s time, especially where she was. Blixen had to somehow manage to operate in what was in nearly every sense “a man’s world”, making her bravery and determination all the more admirable issued from a quiet, sensitive, emotionally wounded woman. Meryl-as-Karen makes right might: critics can kiss her endlessly decorated derriere. 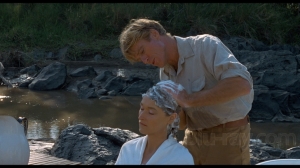 Brandauer is superb as the philandering jerk who seemingly can’t help himself be any more than just dependably decayed. Redford drew criticism, mostly because he played Hatton without using an English accent. He started with it, but was nixed by Pollack, who felt it would distract. Vocal vouchsafing and the looks-jealous left to their bitter keyboard warfare, Redford as Hatton is effortlessly smart, calmly physical and graciously charming—apparently for some people those are bad things.

If the film has a fault as fully involving drama, it’s that it keeps deeper emotional investment at a remove, a bit more of a stately pageant to be observed in comfort rather than a vibrant parade to be dizzily swept up by. That’s not a deal-breaker by any means: leave the hurry and flurry outside for 161 minutes, sink into another time and place and let Africa cast its spell. If you’re ever lucky enough to go, you will find that, like Karen Blixen, you may leave it, but it never leaves you.

Malick Bowens, who passed away in 2017

* “We had a friend… Hopworth, he’d got a book from Denys and didn’t return it. Denys was furious. I said to Denys… “You wouldn’t lose a friend for the sake of a book.” He said, “No, but he has, hasn’t he?”

Right Writer Dept.—The screenplay was written by Kurt Luedtke, who’d done the script for an earlier Pollack film, Absence Of Malice. Then uncredited work was finessed by Pollack collaborator David Rayfiel, who worked with the director on 13 pictures. Besides the Dinesen/Blixen memoirs, material was gleaned from two biographies, Judith Thurman’s “Isak Dinesen: The Life of a Story Teller” and “Silence Will Speak”, by Errol Trzebinski.  Before Universal Pictures studio head Frank Price green-lit Sydney Pollack to direct, the story had been considered by David Lean, Orson Welles (he wanted Greta Garbo to star) and Nicolas Roeg, who envisioned Julie Christie (fair enough) and Ryan O’Neal (gag reflex: this is just a test…).

** Details for the detail determined—–Streep was 35. At 48, Redford was 22 years older than Denys was when he met Karen.  It was the sixth of seven times Redford worked with Pollack, preceded by This Property Is Condemned, Jeremiah Johnson, The Way We Were, Three Days Of The Condor and The Electric Horseman, followed by Havana. The fruitful collaboration sprang from friendship that began when they met on the low-budget 1962 War Hunt, where Redford made his feature film debut, as did Pollack, then an actor, a few years away from taking on the director’s chair.

A couple of trained lions were imported from California, the local savanna variety being more interested in eating actors than rehearsing with them. Streep said that in the night sequence when she was fighting off the big cat with a whip, Pollack untied the feline to make it react more convincingly. He denied this. Meryl & Sydney to the side, it looks real enough for those of us who weren’t there. Let those who have gotten close enough to pet one cast the first bone.

The character ‘of ‘Felicity’, played by supporting actress Suzanna Hamilton, was based on Blixen’s friend and contemporary Beryl Markham: adventuress, aviatrix, author. She had her own brief fling with Denys.