MARLOWE brought Raymond Chandler’s quip-quick detective from the 40s and plopped him into the gaudy hedonism of 1969. It had been 22 years since the last movie Marlowe, The Brasher Dubloon, with George Montgomery, and nine since the brief TV series Philip Marlowe had Philip Carey do 13 half-hour episodes in ’59-60. Tackling the new breed of Los Angelenos with something to hide, James Garner brought a good deal of his Maverick-honed persona to the role, and the genial smart-aleck glove fit enough to pass it along a few years later to The Rockford Files. *

Kansas gal-next-farm ‘Orfamay Quest’ is at a loss in the L.A. swirl, desperate to have rumpled, low-rent private detective Philip Marlowe find her brother. Leads turn up with ice picks attached to them in fashions that prevent continued breathing, then Marlowe is made aware of a blackmail situation involving a TV star, one ‘Mavis Wald’. She blows him off, and her hood boyfriend ‘Sonny Steelgrave’ (name indicating someone to not bother) sics a martial arts showoff onto him for good measure. The cops, of course, resent Marlowe because, according to some script law, they always have it in for private detectives (and the FBI, and a good deal of the population). Could down-homey Orfamay and glamorous Mavis have some link? And what’s with stripper ‘Dolores Gonzalez’? Good & Plenty. 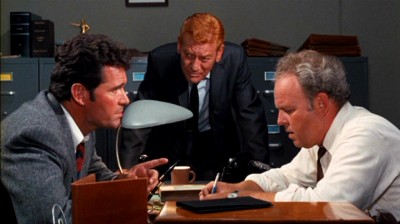 Based off Chandler’s fifth Marlowe novel, 1949’s “The Little Sister”, the script was written by veteran Stirling Silliphant (In The Heat Of The Night). The story isn’t especially involving, but the dialogue is decent. As directed by Paul Bogart, who mostly did work on TV, it looks like slightly upscale television, with obvious sets and some glaring rear projection footage during driving scenes. The music score from Peter Matz is a drawback, pushing broadly into “GET IT!?” territory during some of jokier sequences. 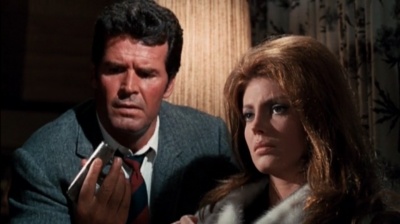 Garner’s Garner, which will be fine for most of his fans, doing Marlowe with a sort of distanced affability, charm mixed with suspicion, alertness with disinterest. He’s backed by sturdy secondaries–Carroll O’Connor, Jackie Coogan, William Daniels, Kenneth Tobey. The natty martial arts threat ‘Winslow Wong’ is Bruce Lee, who gets to jump all over the place and smash furniture: it was new-cool in ’69, looks pretty silly now. 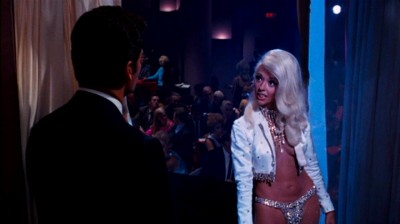 The femme angle is well represented. Sharon Farrell revs it up as ‘Orfamay’; she had a sweet role that year in The Reivers. Gayle Hunnicutt is model-attractive as ‘Mavis’; she was getting pushed by Universal at the time—check out the hair, this movie has some major bouffant action going on. The great Rita Moreno plays the disarmingly naughty ‘Dolores’; she’s the ace in the cast. Smart, funny and sexy as hell, Rita does a hot-as-Venus strip that pushed boundaries for mainstream movies and actresses at the time, and manages to keep classy doing it. Her performance and that number make the rest of the film look anemic in comparison. Whatever “America” she’s part of, we “like to be in” it.

* Coming in 77th place for the year with a gross of $2,800,000, Garner’s Marlowe didn’t spark enough steam to generate a sequel, but it helped crack the case for several 70s incarnations of the sardonic private dick, entries that have their own flourishes, flaws and fans: The Long Goodbye (Elliott Gould, 1973), Farewell My Lovely (Robert Mitchum, 1975) and The Big Sleep (Mitchum, 1978). Physically, Garner best fit the Marlowe of Chandler’s books, but, on screen, the one to beat is still Humphrey Bogart. 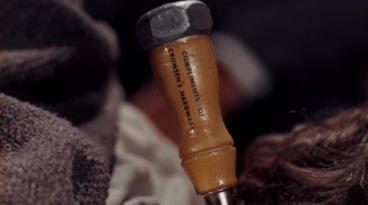 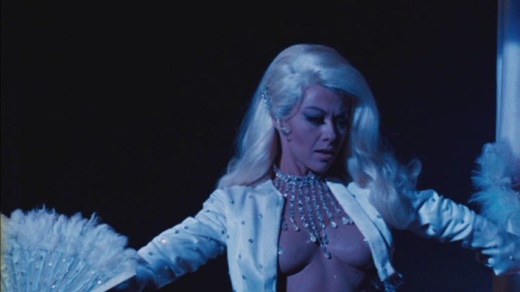 One thought on “Marlowe”