THE INTERPRETER got lost in translation. Sydney Pollack directed, but his last of 20 feature films is one of his least effective. He had able screenwriters in Charles Randolph, Scott Frank, and Steven Zaillian, two big stars and $80,000,000 to work with, yet other than standard sharp work from Nicole Kidman, a couple of effective supporting performances and slick production values, the results are unlikely, unengaging, padded and confused, with a particularly weak conclusion. Yawn.

At the U.N., interpreter ‘Silvia Broome’ (Kidman) overhears what she believes is a death threat against a visiting African ruler, a highly controversial strongman who runs the “Republic of Matobo”, her homeland country that she fled. Federal agent ‘Tobin Keller’ (Sean Penn) is assigned to her, to determine whether she needs protection or has some hidden agenda. Both have fresh wounds from their pasts.

As a thriller, lacks excitement. As a drama underlined with emotions, it fails to move any. Plot-wise, both unlikely and hard to follow. As for making any socio-political-humanist statement about repressive regimes, it’s hollow. Penn, in exhausted & depressed mode, is AWOL–at least he doesn’t resort to burning through cigarettes in every scene. The only reason the scenes he shares with Kidman work is because she’s in them. Catherine Keener is oddly miscast as his partner. Not convincing.

On the positive end, Kidman’s in keen intelligent form, providing what spark she can to enliven the humorless, dreary proceedings. Jesper Christensen is a strong presence, even though it’s dead-obvious he’s a bad guy as soon as he shows up, and Earl Cameron is suitably creepy as the Robert Mugabe-like despot from fictional Matobo. *

Some filming was actually done in the United Nations, a first-time situation, making use of the General Assembly and the chambers of the Security Council. The opening African  scenes were shot in Mozambique. 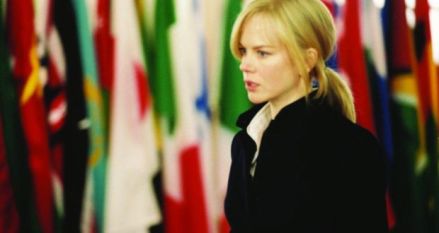 * Earl Cameron was 87 here. He passed away in 2020 at 102. When this movie was released, it was banned in Zimbabwe, due to the obvious parallels–and physical resemblance—to tyrant Robert Mugabe, then in the 25th year of the 37 he spent ruling—and ruining—Zimbabwe. He began his lengthier stay in a hotter place in 2019, 95 years too late.

One thought on “The Interpreter”