SOLARIS, from 2002, was directed, scripted, photographed and edited by Steven Soderbergh, employing George Clooney to star and deploying $47,000,000 to execute the second major film based on the 1961 novel written by Stanislaw Lem. The first was the highly praised 1972 Soviet version directed by Andrei Tarkovsky.

“We take off into the cosmos, ready for anything – – solitude, hardship, exhaustion, death. We’re proud of outselves. But when you think about it, our enthusiasm’s a sham. We don’t want other worlds; we want mirrors.” 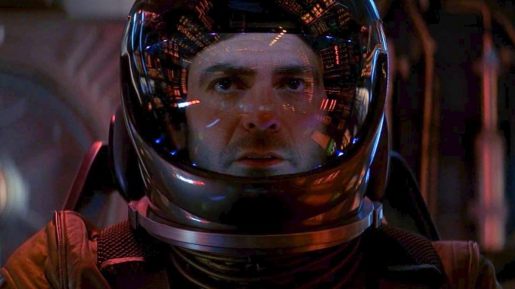 When bizarre personnel reports come from astronaut/scientists at a space station monitoring Solaris (an oceanic, extra-mysterious planet), clinical psychologist ‘Kelvin’ (Clooney) is sent to find out why everyone up there is acting so strangely. Surviving crew members ‘Snow’ (Jeremy Davies) and ‘Gordon’ (Viola Davis) are freaked out in their own particular ways: then Kelvin enters their free-floating paranoia when he is ‘joined’ by  ‘Rheya’ (Natascha McElhone), his wife. The only thing is—Rheya is dead—and has been for a while. So who—what—is this Rheya, and WTF is going on? While the humans melt down, the living mass of Solaris bides its time.

Know this: before the movie is over you will get enough shots of Ms. McElhone’s creepy certitude to puncture the time-waste continuum

Cerebral sci-fi (meaning audience-grip factor of 1 to 1,000), with no action beyond the mind-twists experienced by the humans—and whatever Rheya is—requiring a good deal of patience to sit through in expectation that satisfaction of some kind will be the reward.

Davies warming up for “Justified”

Clooney’s good, the others fine (quirky Davies stealing every moment he can), and the visual element works well enough (swirling Solaris is a pretty, multi-flavor ice-cream cone of a planet), but the emotional and dramatic payoff is composed of particles of exasperation and indifference. It only made it to 125th place in the domestic arena, with a total yield of $30,000,000 internationally. A few critics pretended they knew what it ‘meant’, most referred/deferred to the original, and date-ruined crowds wished they’d spent the night on George’s more relatable make-believe starscape of Oceans 11.

Viola trying to figure out the story

Author Lem disliked both versions. He managed this without even bothering to see this second one: mercifully, Soderbergh’s take only lasts for 98 minutes: the 1972 version runs 166. You could get to Solaris in less time.