LITTLE MURDERS saw strongly positive reviews from critics in 1971, but pretty much was lost in the shuffle at 65th place with the public, a gross of $4,500,000 managing to cover the modest $1,340,000 expended. Alan Arkin made his directorial debut, handling Jules Feiffer’s gonzo script. *

“Are you really so down on people, or are you just being fashionable?”

New York City (standing in for the USA entire). ‘Alfred Chamberlain’ (Elliott Gould), is a emotionally deadened photographer. He lets muggers beat him up until they get tired, and his portfolio consists of pictures of dog poop. Super-spunky ‘Patsy Newquist’ (Marcia Rodd) takes a shine (for no discernible reason) to the unexciting and unexcitable lump, and introduces him to her normal = abnormal family. As the romance progresses other characters come into view: a judge, a minister, Alfred’s parents, a detective. Everyone is crazy, because—we all are. **

Feiffer’s absurdist black comedy does shock & awe on the disintegrating American vox populi of the day. If I could stomach Gould’s character—or the actor himself, this frenzy-pitched bile might be easier to choke down, and newcomer Marcia Rodd’s insistent pixie is as charming as a mosquito. Playing her parents and younger brother, Vincent Gardenia, Elizabeth Wilson and Jon Korkes impressively display loose marbles as actors but the characters are designed and delivered to make you despise them. Mission accomplished. Making the relentless barrage of suppressed rage barely bearable are lunatic harangues delivered by Lou Jacobi, Donald Sutherland and Alan Arkin, little masterpieces of insanity.

Gould produced, Gordon Willis was behind the camera. With John Randolph and Doris Roberts. 108 minutes. 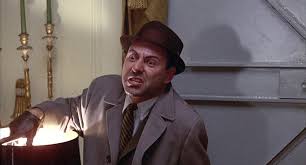 * Feiffer had done it as 1967 play (with Gould). It died after seven performances, but then had a success in London. In ’69, Arkin directed an off-Broadway run that logged 400 performances. 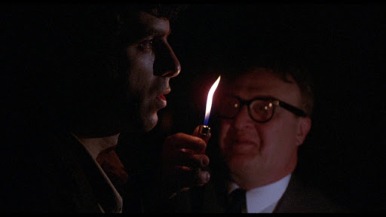 ** 1971 may hold the record for the year with the most films guaranteed to bum you out. Good or great, lame or awful, collectively they were anything but upbeat. Depression, desperation and cruelty of every sort ran through Johnny Got His Gun, A Clockwork Orange, T.R. Baskin, Doc, THX 1138, Dirty Harry, The Panic In Needle Park, Straw Dogs, The Hunting Party, Desperate Characters, Hannie Caulder, The Last Picture Show, A Gunfight, Get Carter, Fortune And Men’s Eyes, The Beguiled, 10 Rillington Place, Billy Jack, Macbeth, Bless The Beasts And Children, The French Connection, Carnal Knowledge, Lawman, Klute, The Devils….Holy Nixon!, we had to wait for ’72 to cheer us up with The Godfather and Deliverance.

Prescient button-pressing movies are one thing: breathe deep (masked) and consider that unreel-world zombieland currently battering us senseless outside our doors, on TV and online? (hey, there’s a song title for you–“On The Screen Where You Live”)  The fractured 70s seem like the drive-in 50s compared to the ultra-sick dawn of the new 20s. Bets on the 2070s?