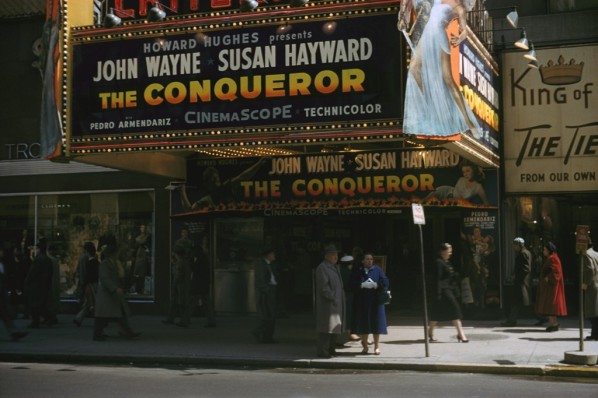 THE CONQUEROR  “Surpasses anything ever filmed before! ” Rarely has an advertising tag-line summed up a subject with such refreshing candor. From 1956, 111 minutes of unintentional laughter that—if you survive it—may actually help you live longer. Indeed, “You’re beautiful in your wrath.”

The same year that John Wayne delivered what many consider his finest performance in one of his best pictures, The Searchers, he let fly with his hands-down lousiest in one of his worst: one of anybody’s worst. The 12th-century slaughter machine known as Genghis Khan—‘Temujin’ to his friends—is a hard-sell as a hero anyway you slice a head, what with the Mongol rampager standing on the heaped top of history’s body count, his acquisition of real estate estimated to have reduced by 11% the population of the entire planet. Somehow, 20th-century RKO dictator Howard Hughes convinced Dick Powell to direct it, with Oscar Millard’s screenplay originally conceived for Marlon Brando. Forgetting the Duke for a moment (don’t worry, you’ll never forget him as Genghis), Brando—did they really think he’d take it?—would not have been much better; NO actor, long gone or currently breathing, could defeat a script as unequivocally terrible as this one. *

“She is a woman – much woman. Should her perfidy be less than that of other women?”

This misbegotten epic is so ripe for mocking, and has been so thoroughly trashed everywhere in the galaxy, that we’ll graze but a bit upon its fertile tundra–why beat a dead jackal? OK, because it’s (a) a jackal, and (b) fun, but leave us do the overdue. First off, it no doubt was probably a “Neat!” matinee for little kids who saw it six+ decades back, just as it’s a priceless “OMG!” hoot for adults nowadays. Two elements work decently enough that two people—only two— can emerge with anything like credit: ace 2nd-unit director Cliff Lyons, safely setting up all those horse-falls, and venerable composer Victor Young, who anointed the soundtrack with some Asiatic oomph. Uh, that covers the praise….

Wayne didn’t read the script until he arrived on location in St.George, Utah (the Gobi Desert being off-limits thanks to Genghian inheritor Mao Tse Tung). Stunned, he plowed on, and…hearing is believing. He gets the lion’s share of ribbing, but everyone is awful. Susan Hayward’s fiery-tempered “Tartar princess”, ‘Bortai’ (Tartar via Ireland), is maybe her worst acting—and THAT says a gazelle-stuffed mouthful. She did try to enliven the location drudgery by making a temptress-befitting play for her leading man, including getting crocked one night and bursting into Wayne’s lodging and challenging his new wife Pilar to “Take off your shoes and fight me for him!”  That Brooklyn-spawned tough cookiness is almost as yummy as her Bortai’s full share of Shake-that-spearean dialogue gems like “I am consumed with want of him.”

Duke’s pal Pedro Armendariz plays blood-brother ‘Jamuga’, Agnes Moorehead is ‘Hunlun’, mother of Temujin, Thomas Gomez has at ‘Wang Khan’, William Conrad plays hearty-like-bull ‘Kasar’ and John Hoyt is plain hilarious as ‘Shaman’. His Oriental= inscrutable hiss-foofing is so offensive that it goes full circle into harmless.  Nearly all of it plays like an SNL skit. There’s the requisite sexy dance sequence (Hughes piling on with a floor show of babes who are as close to Mongolia as Minnesota), several wild battles, lots of skewering from sharp instruments, and enough horses falling down to jiggle the Richter scale. Registering in a less-amusing way was done via Geiger-counter, as the location site had been exposed to fallout from a dozen atom bomb tests. **

Besides jeers from astonished critics and cringes from the post-hangover actors, the $4,400,000 plowed in did “henceforth” harvest some $12,900,000, taking the absurdity & embarrassment test to spot #17 for the year. Those pilgrims among us who like John Wayne still get a big kick out of this howler, because everyone’s entitled to a goof or three (this counts as ten), while those “Merkit dogs” who disdain the Duke (mostly for his Khanish politics) can smugly get off horse-laffing at his expense. So, it’s a win-win.

Other Mongols and Merkits are snarled across by hardies Ted de Corsia, Lee Van Cleef, Leo Gordon and Richard Loo. One of the exotic dancers writhing around is Barrie Chase, 21. Four veteran cinematographers toiled on it: Joseph LaShelle (fired when Hayward got pissed at him), Leo Tover, Harry J. Wild and William Snyder.

* British novelist-turned Hollywood screenwriter Oscar Millard had some decent feature credits before this fiasco: The Frogmen (his Story was Oscar-nominated), No Highway In The Sky and Angel Face. On his earth-trembling work for The Conqueror, in a 1981 interview he offered “I decided to write it in stylized, slightly archaic English. Mindful of the fact that my story was nothing more than a tarted-up Western, I though this would give it a certain cachet and I left no lily unpainted. It was a mistake I have never repeated.”

The 1965 epic Genghis Khan is also fun-bad, mostly for its casting: its screenplay isn’t a work of art, either, but nothing can touch The Conqueror in that regard. “Send me MEN!”

** Morbid wags later dubbed it an “RKO Radioactive Picture”. Much lore is available about the eventual cancer toll that decimated the cast and crew, at least 91 of a group of 220 succumbing, three times actuarial likelihood. That’s not counting the 300 Navajo extras. Wayne, Hayward, Powell, Armendariz, Moorehead, Van Cleef were all lost to The Big C.  Granted, many of them had long and heavy smoking habits, but spending months rolling around in and inhaling radioactive dust couldn’t do you any favors.