Walter Hill doesn’t take a backseat to anyone when it comes to directing hard-boiled action movies, marked by a strong visual style, a eagle eye for casting, and vivid staging of no-holds-barred rough stuff leavened with just the right amount of self-aware humor. This unabashed bad-boy’s night out from 1987 falls in with his classics Hard Times, 48 Hours, The Long Riders, The Warriors and Southern Comfort. A 104-minute have-tequila-bring-shot-glass situation.

“Hell, Jack...The only thing worse than a politician is a child molester.“

“Funny, ain’t it, how it comes around. Right way’s the hardest, wrong way’s the easiest. Rule of nature, like water seeks the path of least resistance. So you get crooked rivers, crooked men.”

Launched by simmering Jerry Goldsmith scoring, the gritty tale crackles with testosterone clashes from start to finish, the quote-laden script—story from John Milius, screenplay by Deric Washburne (The Deer Hunter) and Harry Kleiner (Bullitt)—eaten alive by the actors, all in top form. Trimmed down Nolte fits the take-no-guff hero to a tee, and Boothe has a field day. Alonso’s alluring, Torn tears it up. 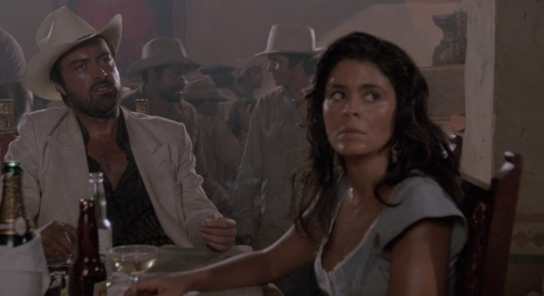 Hill: “I don’t think it was understood how much genre parodying was involved in that picture. It rather mystified a lot of American critics but it has its defenders.”  Damn straight.

Shot in Texas (El Paso) and California (Santa Clarita and Saugus), with broiling cinematography the handiwork of Matthew F. Leonetti. Editing and sound are tight. The Goldsmith scoring over the end credits is brilliant.

“These people here, I’m telling you, they can’t follow old Cash in a verbal sphere at all. When I’m flying, son, it is solo. And you know that feeling when you’re talking along and you pause for a minute, maybe freshen your bourbon, do up the fly or something, you look around real careful and you know in your heart it’s all just wasted. Ain’t nobody understands where you’re at, all your private jokes and subtle conversations just sailing right past them.” 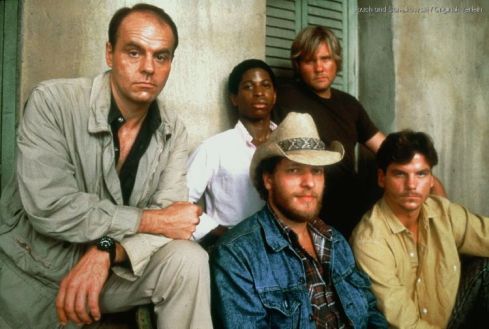