THE HIGH AND THE MIGHTY was an audience-grabbing smash in 1954, with a gross of $17,400,000 domestically, zooming into airspace as the year’s 7th biggest hit, a huge win in that it was produced for just $1,470,000, pile-driven thru in a shoot lasting just 26 days  by director William Wellman. Reviews at the time were divided between adulatory and derisive; industry peers tabbed it worthy of six Oscar nominations. Today, thanks to the melodramatic script and a good deal of over-zealous thesping, it draws both snickers as a camp hoot and sentimental smiles as an entertaining monument to a bygone time. The glamour of cross-oceanic flight in the days of copious cigarettes and stewardesses who looked like models. A cross-section of passengers & crew running the gambit of Eisenhower Era pep, angst, why me?, and can-do. Engine trouble. John Wayne batting some man-sense into Robert Stack. You can’t lose, what’s not to like, inflate your life jackets, tickets please.

“I got news for you guys: we just passed the point of no return.”

On a flight from Hawaii to San Francisco, a Douglas DC-4 passenger airliner has propeller trouble. Critical fuel issues arise. Too late to turn around, the sea below churning, it’s enough to send everyone on the plane into sharing-mode, and apart from some wince-inducing comic relief, every opened can of woe has worms in it. Adventure-living writer Ernest K. Gann based the main plot on real events, then loaded up with enough character exposition to enable walking from Honolulu to the Golden Gate on the clichés. Since he’d written the very good 1953 Island In The Sky, expertly directed by Wellman, starring Wayne in one of his better, low-key roles, the star (who co-produced) and director planned to load this Gann flight up as an all-star vehicle, an airborne Grand Hotel with the added tension of looming calamity.

When Spencer Tracy bowed out because of Wellman (they’d had a feud going since the early 30s, including several bouts of fisticuffs), Wayne took the lead role, but neither the actor nor the character hog the spotlight, as it’s an ensemble piece. After a slew of big-name actresses (Crawford, Rogers, Stanwyck, McGuire, Young) declined the two most tasty supporting roles—of middle-aged women fretting over losing appeal—second-tier troupers Claire Trevor and Jan Sterling nabbed the parts and worked the heck out of them, both earning Oscar nominations as a result.

Robert Stack got the pilot-about-to-crack (and crack up the plane) bit, and the seats bulged with familiar supporting players, including Laraine Day (good), David Brian (fine), Sidney Blackmer (atrocious), Robert Newton, Paul Kelly (reaching), Paul Fix (sympathy ploy), John Qualen, Phil Harris (hamming), and newcomer John Smith. Another fresh face, pretty Doe Avedon, does well as the capable stewardess. Playing it close to the vest, Wayne’s rock solid, but the let-it-all-out-and-out-loud dialogue is so ‘highly mighty’ it gives you altitude sickness, and Wellman seemed content to let his supporting vets rev their props for My Last Best Chance at an Oscar. There’s enough anxiety in the group to short-circuit a convention of psychiatrists. Not merely long-winded, it’s just plain long as well, at 147 minutes. * 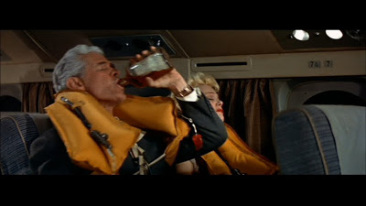 Dimitri Tiomkin’s dramatic, immediately arresting score won an Oscar, and nominations went up for Wellmans direction, Trevor and Sterling for Supporting Actress (loopy material notwithstanding, they’re excellent), the Film Editing and for Song (though not heard in the film, it became a hit).

“You know, I always dreaded the idea of becoming an old woman. And the way things look now, I won’t have to worry about it any more. You know, I haven’t been whistled at in years, and the idea of growing roses for the rest of my life is really beginning to haunt me. There oughta be a home for dames like me. Yup – we shoulda organized. You know, a house somewhere with no mirror in it, far away where we never have to look at a young girl. They have homes for unmarried mothers but everybody forgets about the girls who – who never quite managed to make things legal. I think I could start one! Yeah – I could call it the May Holst Home for Broken-Down Broads.”

* Doe Avedon had been married to famous photographer Richard Avedon; Audrey Hepburn played a fictional version of her in Funny Face. Cold-eyed Paul Kelly, besides acting in bad guy parts, had served time in San Quentin in the late 1920s, for manslaughter. Dependable smartass William Campbell’s first wife was Judith Exner, infamous as mistress/plaything to JFK and gangster Sam Giancana. 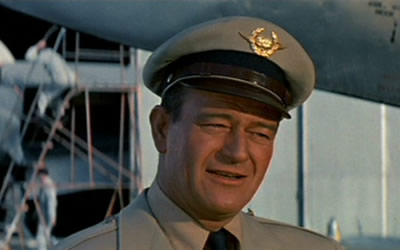