THE ENFORCER sees perennially teed off ‘Harry Callahan’ (Clint Eastwood) step up his a-hole-extinguishing technique by giving his trusty .44 Magnum a breather: in the finale he uses a handheld LAWS rocket to send Creep # 1 to infinity & beyond. It’s the least he can do, given the ‘meh’ script, cardboard characters and connect-dots direction of this brutal, simplistic third installment in the series about the Bay Area’s most un-San Franciscan detective.

The screenplay, rewritten by Stirling Silliphant (In The Heat Of The Night, Charly, The Poseidon Adventure) and Dean Riesner (Play Misty For Me, Dirty Harry) was originally whipped up by a couple of film students, and it fits in with the era’s crime movie vogue in reflecting contemporary schemes such as the Patty Hearst kidnapping. *

From the Too-Good-to-be-True Law

When ‘The People’s Revolutionary Strike Force’, led by crazy-eyed ‘Bobby Maxwell’ (DeVeren Bookwalter) rips off heavy weapons, commits several vicious killings and kidnaps SF’s mayor, our take-no-shit-just-deal-it-out Callahan gets the case, despite a track record of littering the city with Smith & Wesson-aerated slimebag bodies and insubordinate wisecracks. Thanks to quivering liberal policy changes, he’s uncomfortably saddled with an inexperienced  female partner (Tyne Daly),yet in due course ‘Inspector Kate Moore’ proves her mettle: stow the glamour for gumption & guns.  The popcorn-fed can wheeze freely knowing that since Bronson has cleaned up New York City, Clint’s seen that California shed some scuzz.

What to flip at guy holding shotgun: “This is my best sport’s jacket.”

Returning from the first installment is veteran urban-crime fixture Harry Guardino, vainly counseling Callahan to behave, and— from both earlier go’s—John Mitchum (Robert’s bro) as ‘Di Giorgio’, one of his 167 credits. Bradford Dillman gets to play the rote impatient captain role this time. **

LIEUTENANT: “Are you finished with the questioning, Callahan?  HARRY: “Hypothetical situation, huh? All right, I’m standing on the street corner, and Ms. Grey there comes up and propositions me. She says if I come home with her, for $5 she’ll put on an exhibition with a Shetland pony...”   MS.GREY: “If this is your idea of humor, Inspector…”  LIEUTENANT: “All right, what are you trying to do here, Callahan?”  HARRY: “I’m just trying to find out if anybody in this room knows what the hell law is being broken, besides cruelty to animals.” 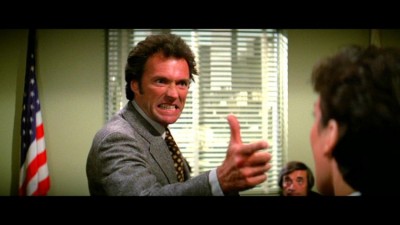 James Fargo directed (with Eastwood pretty much calling the shots); he’d worked as Assistant Director on five earlier Clint flix. He’s proficient, but uninspired; his subsequent work was nothing to brag about. Apart from a few exchanges, the script is lazy. The action is mean. A “Here’s Harry!” shootout & demolition of a liquor store, some expected verbal and bat-around rake overs of punks and clods, and the literally explosive resolution don’t lift the project from mediocrity. At least it’s better than the sequels.

Though nowhere near as compelling as the first two films, it outdid them at the boxoffice, coming in 10th for ’76, grossing $52,800,000, easily polishing off a $9,000,000 cost. On hand to receive insults or eradication are Albert Popwell, John Crawford, Robert Hoy, Michael Cavanaugh, Samantha Doane, Jocelyn Jones and Joe Spano. At 96 minutes, a good half-hour shorter than the superior Magnum Force.

* Movies & the unsatisfied citizen/cinema surf the crime waves—-the 1920s gave us the colorful bootleggers. The 30s were prime time for bank robbers, ditto colorful. The 40s were fully occupied with entire criminal nations, who provided their own extensive costumes, expensive gear and snotty attitude. The 50s unloaded on devious Commies, crooked unions and kooky teen delinquents. The 60s delivered arch-villains: we let 007 handle it. Beyond questionable clothes and hair, the 70s—reflected in reflexive fare like The Enforcer—saw quasi-revolutionary groups of crazies from all over the spectrum. We even had a crooked President! Thank God that never happened again. Then came the psychos, corporations (see:psychotic), terrorists and season finales of The Apprentice. 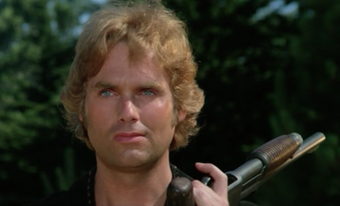 ** Post-arrest paperwork—-DeVeren Bookwalter had been seen briefly in the previous Callahan carnage carnival, naked and snorting coke before sudden demise via one of the Magnum Force. A noted stage actor (primarily Shakespeare), he only made a handful of film appearances before passing away from stomach cancer in 1987, just 47 years old.

Though she’d been acting, mostly on TV, since 1954 (when she was eight), this was Tyne Daly’s first major film role, and helped lead to her successful 1981-88 TV run on Cagney & Lacey.

* Co-scenarist Dean Riesner had once been married to Maila Nurmi, a Finnish-American dancer/pinup girl who achieved fame & goofy glory as a TV hostess under a name that hubby Riesner came up with—Vampira.

Rule #3: Like Bond, Callahan must always be demoted before being brought back to save everyone’s rear