THE TEXAS RANGERS does about as accurate a job on that legendary outfit of bad-asses as you’d expect from a movie made in 1936. Which is to say it shovels action-packed cornball foolishness about as close to authenticity as we are to honest government, salted with enough casually offensive ethnic material in it to turn off most of us. Had I caught it as a little kid, I’d no doubt have been impressed by the vigorous fightin’, and suckered by the dopey “We’re pals” humor and rascals-become-heroes routine. Seen today, having accumulated some book-learnin’ that opened frontiers beyond the swing set and the nearby vacant lot (which handily served as every kind of battlefield), it’s a little harder to swallow. A jug of who-hit-John might help.*

‘Jim Hawkins’ (Fred MacMurray), “Wahoo” Jones’ (Jack Oakie) and ‘Sam “Polka Dot” McGee’ (Lloyd Nolan) enjoy themselves robbing stagecoaches, and think they’ve lucked into a sweet situation when, to get out of a jam, Jim and Wahoo join the Texas Rangers. The scam is they’ll have inside info to pass on to Sam about where and when to pull a job. But the two galoots change their mind about things legal and honorable after partaking in a major fight with Indians, and meeting a dang-right-nice gal. Sam stays on the bad side, forcing a showdown between the old saddle pals. Nolan easily does the best acting.

Directed & produced by King Vidor, its release coincided with the hoo-rah centennial year for Texas, marking the 1836 breakaway from being a province of Mexico to declaring an independent Republic. Location shooting, however, was done in New Mexico, outside Sante Fe and at San Ildefonso Pueblo. 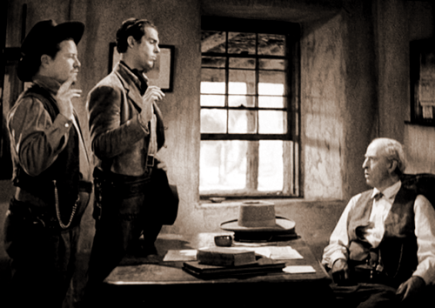 A few of the grizzled extras look like they knew their way around a plug of tobacco, and the central action sequence with the Indians (Comanches? played by Navajos?) is a pretty violent affair for the time, but it doesn’t comport to likelihood, what with the Rangers jokingly picking off the “Injuns” with pistol shots at 200 yards. More pain-inducing “fun” is had by Oakie imitating Mexican accents, though to make everything O.K. at the corral, when the token Tex-Mexican ranger (played by Joe Dominguez) gets killed, the major lets us know “a finer man never lived“.  Whew…That ‘gracias for dying’ sendoff contrasts with what Mexican-Americans knew of the real historical brutality of the lawmen against non-whites. The pompous narration self-caricatures. The theme song is from south of Dorksville. Louis Stevens bears blame for the script. 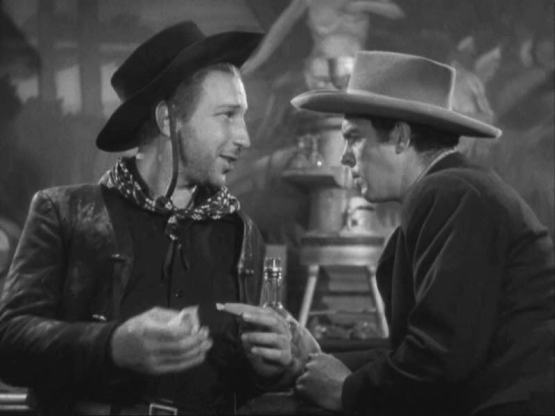 The take of $2,900,000 saw it shoot up a bunk on 66th place for the year, which had newcomer Nolan, 33, turn up in seven features, the established Oakie, 32, in five, and MacMurray, 27, in four, including The Trail Of The Lonesome Pine, a much better outdoor drama, in Technicolor. The Texas Rangers did manage to draw an Oscar nomination for Best Sound, but the gunshots and galloping lost the statue to the hard-to-shake rumbling of San Francisco. 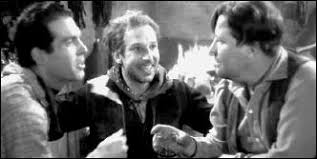 * Remade, in color, in 1949, as the more bearable Streets Of Laredo, with William Holden, William Bendix and Macdonald Carey. Then there was a 1951 B-flick with George Montgomery, same title, different plot (might be silly fun).  Aside from showing up in numerous quality films—The Comancheros, Bonnie And Clyde, Extreme Prejudice, Lonesome Dove, Hell Or High Water readily come to mind—the hard-bitten hombres exploits were also showcased in TV series. Tales Of The Texas Rangers ran from 1955 to 1959 (I dimly recall, because I am older than a Saguaro cactus), the enjoyable Laredo (1965-67) and the no-thanks-I’ll-just-hit-my-head-with-a-mallet Walker, Texas Ranger, inflicted from 1993 to 2001.

Back to the big screen—in 2001, dropping the ‘The’ was the just plain—and just plain terrible—Texas Rangers, with James Van Der Beek and Ashton Kutcher. It was an atomic bomb, demolished by critics, making but $763,740 against a cost of $38,000,000. Ouch. That kind of wipeout calls not just for a bottle of tequila, but a brand that has the fabled hallucinogenic worm at the bottom. The only memorable thing about it was a quote from John Milius, who wrote the original script, which was trashed and rewritten when the Weinstein’s took over production: “I think they should give Harvey Weinstein to the Taliban. I’d like to see him on the other side. I’d like to hunt him down in a cave.” Damn straight on that one, Raisuli. 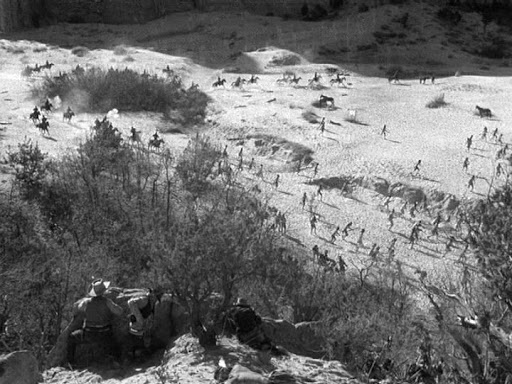