HIGH SIERRA, gangster fave from 1941, is best-known for being the first sock of a one-two punch, followed later in the year by The Maltese Falcon, belts that lifted Humphrey Bogart into front-rank stardom after toiling away for 11 years in 40 supporting roles. More than good fortune for Bogie, it was a success notch for several of those involved. *

“I wouldn’t give you two cents for a dame without a temper.”

Infamous bank robber ‘Roy Earle’ (Bogart) gets sprung from prison, thanks to an old associate who wants to have Roy’s talents in on a Big Score, knocking off a resort casino in the California desert. Earle is a tough customer, with little patience for inept cohorts, but he shows a soft spot for a farm family he meets up with, taking a liking to their handicapped daughter (the old Teenage Beauty With a Club Foot angle). Meanwhile, ‘Marie’, the gang’s hard-baked cookie (Ida Lupino) shows her own vulnerability when she falls for Roy. But crime and loving a crook doesn’t pay—at least in old movies— and the deck is stacked against “Mad Dog” Roy Earle. 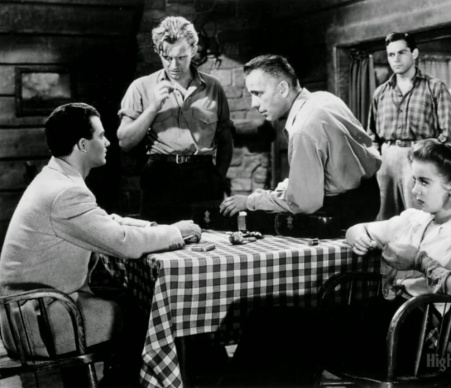 Taken from a novel by W.R. Burnett (Scarface, Little Caesar), the story has a built-in sympathy factor (I remember seeing this as a kid and feeling sorry for Bogart’s ‘nice’ hoodlum), that melds with enough hard-boiled stuff to guarantee a crowd-draw. A serendipitous lineup of Warner Brothers talent hit the accelerator. Co-writing the script with Burnett was John Huston, gaining a rep at the time for his way as wordsmith on Jezebel, Juarez and Wuthering Heights. With input from executive producer Mark Hellinger, they slammed out a taut screenplay that was then put into the keep-things-moving mitts of director Raoul Walsh. The colorful Walsh had just delivered two winners for his new employer in The Roaring Twenties and They Drive By Night. Bogart co-starred in both of those.  Ida Lupino, 22, had nailed a great part in the latter, and was seen as enough of a draw that the studio gave her top billing over Bogart (the last time that would happen to him).

A memo Huston sent, before Bogart got the part, about how to handle the script, informed how Bogart would approach the role: “It would be very easy for this to be made into the conventional gangster picture, which is exactly what it should not be……..Take the spirit out of Burnett, the strange sense of inevitability that comes with our deepening understanding of his characters and the forces that motivate them, only the conventional husk of a story remains.”  Though an essential loner, stunted by prison, and clearly on the wrong side of the law, Bogart’s pre-doomed Earle had an under-layer of decency, loyalty and ethics, even a wounded innocence, that together with the desperate wish for something better than her lot as expressed by Lupino’s Marie, combined to have you hope that, guilty or not, they’d get away with it. It was a new take for the actor and a fresh twist on the genre. Past the bluntly realistic penitentiary haircut, and the ease with deadly weapons, there’s someone who finally just wants and needs the isolation and tension to cease and desist. After some shooting… 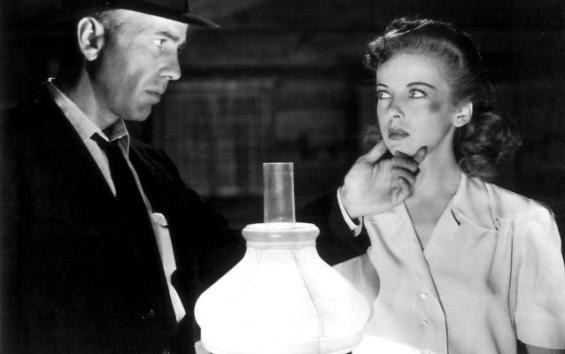 Supporting roles were filled with a solid bank of players; seasoned older pros like Henry Travers, Henry Hull and Barton MacLane, and eager young hopefuls such as Arthur Kennedy, Cornel Wilde and Joan Leslie. Location shooting was done around Lone Pine near Mt.Whitney, Arrowhead Springs, Glendora and the Mojave Desert. Thanks to Walsh, the tempo doesn’t let up, with some fairly wild mountainside chase sequences, a bit of gunplay and terse moments of suspense. The inevitable tragic finale is a classic.

While the chopper-wielding Earle’s excess of sentiment may seem a liberal stretch, and a few scenes are too rushed (in the old style, where character flips are accomplished in seconds), the main flaw for many viewers today will be the moments of patronizing humor at the expense of then-busy Black character actor Willie Best, who does his shucksy, eye-rolling routine: it’s hard to take. A part of the Good Old Days that wasn’t.

* Bogart wanted the role, and did what he could to make sure George Raft didn’t walk off with it. Neither Huston, Walsh nor producer Hal Wallis were keen on the troublesome Raft, to Bogart’s everlasting smirk. The picture also helped cement his lifelong association with Huston, who would become his close friend and most important collaborator. The success here, along with his script on the same year’s mega-hit Sergeant York saw Huston finally getting to direct, with the result being The Maltese Falcon. For Raoul Walsh, this was the third of a slew of 40s hits at Warner’s, including The Strawberry Blonde, They Died With Their Boots On, Gentleman Jim, Desperate Journey, Action In The North Atlantic and Objective Burma!

The newcomers: Arthur Kennedy, 26, in his second part, and Cornel Wilde, 28, in his first credited, are both quite good right out of the gate. As ‘Velma’, the ungrateful gal with the bad foot, young Joan Leslie got a break as well. Performing on film since she was 11, she’d done 15 parts in 15 films under her real name Joan Brodel. She was just fifteen here, so Walsh and Bogart made sure she was handled with kid-gloves, as it were, forbidding swearing around her, for example. Leslie, who passed away at 90 in 2015, had nice things to say about the experience. Going over various accounts of the filming, I’ve yet to encounter any author or reviewer remark on the iffy age dif between Ms. Leslie, her character and Earle—Bogart was 41. “Hey, she looks 18…just tell the publicity guys to do their job…”