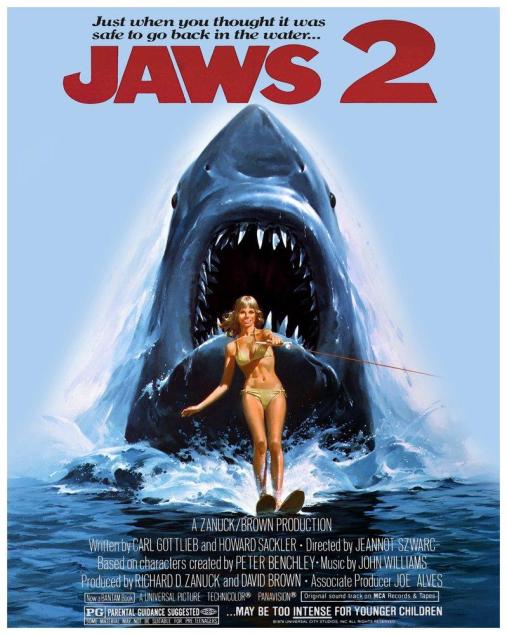 JAWS 2, if nothing else, gave us the immortal tagline “Just when you thought it was safe to go back in the water …”  Persuaded by money (see: Motivation, powerful) star Roy Scheider didn’t consider the sequel idea or the resultant script safe: according to his biographer Diane Kachmar, he was so desperate to get out of the problem-plagued picture that he “pleaded insanity and went crazy in The Beverly Hills Hotel”.

Amity police chief  ‘Martin Brody’ (Scheider) has to handle another great big Great White, which has decided to chow down on local divers, swimmers, water-skiers, assorted boats (they contain yummy people snacks), even a helicopter? The snouty one has a special yen for teenagers— and we should not root for the shark?

The script is by Carl Gottleib (he wrote the first movie), who retooled work done by Howard Sackler (The Great White  Hope, Saint Jack), and direction was entrusted to John D. Hancock, who was fired and replaced by Jeannot Szwarc. Szwarc’s track record includes the cult romance Somewhere In Time, the less-than-super Supergirl and the underrated Santa Claus: The Movie. He had an acrimonious working relationship with Scheider, testy enough that they actually got into a physical fight at one point. As had been true of the previous voyage, the various shark mock-ups were a vexing aspect.

Returning along with Scheider were Lorraine Gary, as his wife (she was conveniently married to Universal’s president), and the always welcome Murray Hamilton as the reality-evasive Mayor. Composer John Williams also came back, scoring with zest. It was shot partially in Massachusetts, around Martha’s Vineyard, and at various beach locales in Florida.

Critics were unimpressed, but dorsal fin fans flooded the cineplexes: the $30,000,000 horror lark chomped its way to 7th place in the US in 1978, and gulped down a planetary tally of $208,900,376.  Giving the ferocious fish a fight for fantasy scraps that year: Superman, Halloween, The Fury, Damien: Omen II, Invasion Of The Body Snatchers, The Swarm, Battlestar Galactica and Dawn Of The Dead.

Marc Gilpin, who played Scheider’s son, claimed that while shooting a scene on a makeshift raft of smashed-up yachts, the teenage  actors were being circled by an un-fake, unpaid hammerhead shark.  Scared for real, they screamed and yelled at the production crew, filming from a distance. Those guys assumed the kids were just “in character” and gave them the thumbs up. The curious creature moved on.

Purportedly, a few months before his death, Robert Shaw had the chance to see this movie at a private screening. His reaction was pure ‘Quint’: “I’m glad I did not intervene in this piece of shit”.