THE JOURNEY IS THE DESTINATION relays a colorful and interesting, then disturbing,  finally tragic story, covering the last few years in the brief life of photographer Dan Eldon, killed by an enraged mob when he was 22, covering the effects of an American airstrike in Somalia. The 2017 film didn’t get much love from reviewers, but I liked it—having somewhat of a predisposition for films involving travel in Africa–and you may as well. 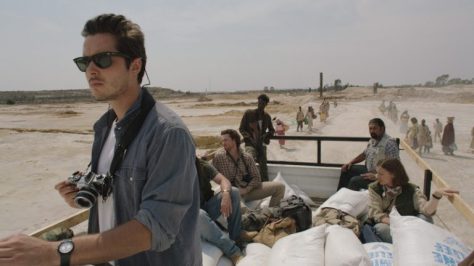 Charismatic, talented and adventurous, British-Kenyan artist & activist Dan Eldon (Ben Schnetzer, 27), leads a group of friends on a land rover safari they dub “Student Transport Aid”, to help deliver supplies to refugees in Malawi. That taste of wild freedom with a romantic tinge and positive results spurs him into working as a photo-stringer for news publications, where his skills draw attention and praise. Ultimately his passion for witnessing and sharing truth (and an ample portion of youthful risk-taking) draws him to an untimely fate in 1993.

Directed with energetic pictorial flair by Bronwen Hughes, it looks great throughout, shot on location in South Africa. Hughes co-wrote with Jan Sardi (Shine). The lively music score arranged by Duncan Bridgeman adds a nice coat, and the camerawork from Giulio Biccari is laudable. That irritated Cape Buffalo is a nifty CGI effect, if you’re wondering (they can’t train those ill-tempered brutes). 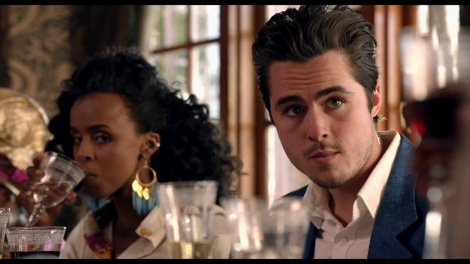 The film lists 25 producers in various capacities of that aspect; they include Beldon’s mother Kathy, played by Bello, who also served as an Executive Producer. 123 minutes.