MISSION OF HONOR is the US release moniker for this well-intended but unfortunately cheesy 2018 WW2 flick, known nearly everywhere else as Hurricane. That attention-grabbing word rings more appropriately gutsy for one thing, but it’s also fitting as the airmen heroes portrayed mainly did their deeds in the workhorse British aircraft known as the “Hawker Hurricane”. As far as the 123 self-defeating minutes of the script, a grimace-inducing mission of endurance, they’d have been better off with Hot Air. 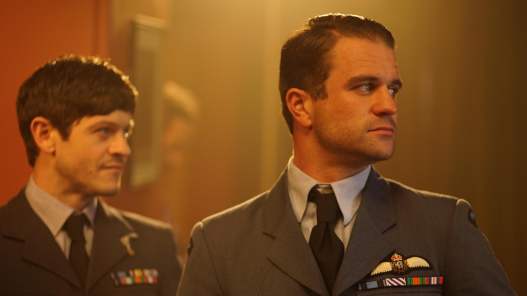 1940, the Battle of Britain. Facing the Luftwaffe in the skies over England, among the units in the outnumbered RAF was Hurricane Squadron 303, composed of Polish pilots. They’d escaped across the Channel in order to keep fighting the Nazis from holdout Britain (the Polish Air Force having been obliterated, their country conquered and enslaved). Despite sneers of prejudice, and that wonderful class assistude—yes, I spelled it that way—so beloved by we knaves, the spirited, vengeance-bound Poles show up their sniffing hosts and surprise the seemingly unstoppable Germans. At the end, post-war politics see them not getting wings so much as the shaft, another of history’s shameful “thanks, now f-off” situations. 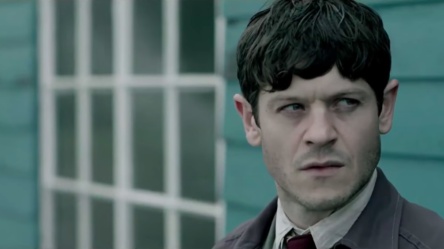 Good untapped material on hand, and overdue as a salute, but the $10,000,000 Polish-U.K. production makes a real mess of it. Iwan Rheon (complete with a haircut that must have been done by a duck) plays real-life ace Jan Zumbach, and Milo Gibson (son of Mel) plays Canadian ace ‘Johnny Kent’: they’re satisfactory. Most of the blandly interchangeable supporting cast overplay under David Blair’s ham-handed direction, with the ‘Oh, Please Stop’ award going to Stefanie Martini crying out loud present-day wishfulness (and historical ignorance) as a Anything With Pants slattern, in uniform as part of the plotting crew back at base: the role is terribly written. The script is stuffed with modern-audience-pandering dialogue, ker-thudding throughout—the type of profanity belongs in 1970, not 1940— and contrived faux dramatic behavior from the characters rankles (the stupid scene of pilots drunkenly assailing Air Chief Marshal Hugh Dowding is particularly absurd). How did that Hurricane plow into a field, belly-up with landing gear retracted and not spindle the propeller?  Sorry, scenarists Alastair Galbriath and Robert Ryan, but you wheezed up one lousy screenplay. Meant to be a tribute, it ends up an insult.

One of the few surviving Hurricane’s was used for some close shots, otherwise its a CGI affair, and a glaringly obvious one. The plentiful but unexciting action scenes don’t convince–fiery explosions galore, but the dogfights are done with zip-bonkers nod to anything resembling reality, and no amount of force-fed adrenaline goosed up by Laura Rossi’s repetitive score makes the bollocks pudding easier to choke down.

Box office sputtered at $2,137,751. With Marcin Dorocinski, Kryštov Hádek, Christopher Jaciow, Hugh Alexander. This joins a squadron of CGI-jammed, authenticity-throttled war flicks in recent years that deal with air combat—Red Tails, Flyboys, Pearl Harbor, Flight Of The Intruder. If you can’t get it within missile range of right, go ruin another genre.