HEAVEN’S GATE is Hell to get through. In 1999, Time, having sport with misery, placed the film on a list of the 100 worst ideas of the 20th century. Whether it’s more depressing than World War One or leaf blowers is debatable, but as multi-million dollar ego-trip movie fiascoes go, it’s hard to beat. If only you could beat it, first with a sack of cowpies and then with a shovel. Bad movies can be fun, but this infamous 1980 septic epic is just—when not boring you into a coma— downright infuriating. Like 99% of victims who saw it back when, I thought it sucked worse than altitude sickness. A mind is a terrible thing to change, but we can evolve (mutate?) and enough years had passed—forty seemed safe enough—to give it another shot. After round two, I did something I’ve never done with a movie I no longer wanted. Instead of giving it away, since at present I didn’t hate anyone enough to foist it on, I opted to be a good citizen. And threw it in the waste basket. *

Aiming at the Director’s Cut

Wyoming, 1890. Greedy cattle barons, angered by having to share the open range with small farmers and immigrants, hire a company of gunmen to kill off 125 people on a list they’ve drawn up, terrorizing the rest of the ‘squatters’ into leaving. What became known as The Johnson County War gets underway, as Capitalism trumps Freedom, and the government backs the big frys (go figure). 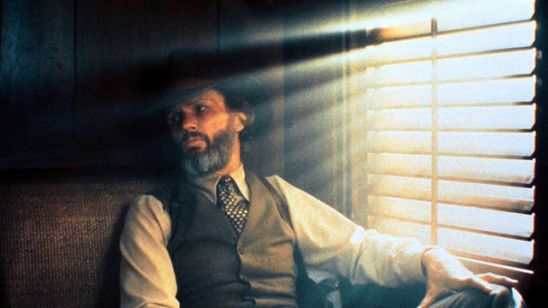 Kris Kristofferson, Christopher Walken, Isabelle Huppert, John Hurt and Sam Waterston play historical characters—that is to say, they play people with those names, but the only resemblance to the actual folks are the names. Jeff Bridges serves time as a fictional character, as poorly drawn and unlikable as the fact-stolen ones. The director and writer responsible was Michael Cimino, who on the strength of his entertaining buddy flick Thunderbolt And Lightfoot and gripping Oscar-winning hit The Deer Hunter, was given free rein to indulge himself after getting an initial budget of $11,600,000.  Key word:  indulge.

There is so much wrong with this movie it would take a book to cover. Indeed, there was one: “Final Cut”, by United Artists exec Steven Bach, a searing look at how the above figure engorged into a $44,000,000 vanity vacuum that detonated such a stink-bomb yield of blistering fallout that it hastened the demise of United Artists after 62 years. It took James Bond to barely salvage things, with For Your Eyes Only keeping the gut-shot company on life support, at least until its parent outfit TransAmerica abandoned ship and sold it to MGM. As in the movie, ruthless Capitalism beat the upstart little guy, but this time he practically begged for it.

Hold my snortin’ horses! Before scalping Cimino’s headcase and staking it on a anthill smeared with honey, let’s go 19th-Century gallant and give what works some due. Even saddled with the terrible script, Walken and Waterston make positive impressions. The lavish art direction earned an Oscar nomination, and there’s an orgy of detailed costuming. You can’t fault the energy of the swarming extras in the many crowd scenes (2,500 were employed in total). When cinematographer Vilmos Zgismond is allowed by the director to break free from mounds—make that tons—of stylized atmospherics, he gets some fine captures of the locations, most done close to Glacier National Park in Montana and near Wallace, Idaho.

We’ll also tip a Stetson to the second tier of used and abused cast members: Richard Masur, Brad Dourif, Geoffrey Lewis, Paul Koslo, Joseph Cotten, Ronnie Hawkins, Terry O’Quinn, Mickey Rourke, Willem Dafoe (29, debut, no lines, at the needless cockfight sequence). Though they all wrestle under the wounded buffalo of the script, none dishonor their vocation. It’s a treat to see Cotten, 75, in one of his last roles, even if it is in the film’s utterly superfluous 20-minute opener, set in Harvard 20 years before the body of the story. Filmed in Oxford, that “let’s tack this on” sequence alone added $5,000,000 to the budget.

Cimino’s wishes, whims and whiplashes ate up 165 days of principal photography, shooting more than 1,300,000 feet of 70mm film, 220 hours worth. The first 5-hour, 25-minute preview cut staggered already stunned studio executives, then the premiere, shorn by nearly two hours to 219 minutes was such a debacle that it was then drastically whacked to 149 minutes for the general release. Critics were dumbfounded, the domestic gross was a piddling $3,500,000, pawing at 118th place.

The director had four superb editors, with stellar credits galore (William Reynolds, Lisa Fruchtman, Gerald Greenberg and Tom Rolf), try to make sense of his ‘vision’, but no amount of trimming or scene re-arrangement could save this whale because you’d still be left with the casting, script, direction and waste. Nearly every scene is dragged out long seconds—minutes—past what’s sufficient to make a point. As to the running time of three hours, thirty-nine minutes, it isn’t length, it’s what you do with it (hands off my subtext, cowboy!). There are any number of wonderful movies with prodigious running times: Lawrence Of Arabia, Gone With The Wind, The Godfather Part II, Reds, Fanny And Alexander, Spartacus, Titanic, War And Peace, Return Of The King, etc., etc.  Along with having fascinating stories and characters, flawless technical assurance and plots you can follow without crumbs, they were thoughtfully but rigorously cut. Pacing is key, how long to stay with a scene or shot so that it impacts rather than numbs.

Look, I survived Sam Peckinpah and Barbra Streisand, but this is a hearse of a different color (brown)

Isabelle Huppert’s American debut at 24 as a merry frontier madam is more fizzle than sizzle; out-of-place and unconvincing (her real-life counterpart was not a hooker), zip for chemistry with contesting swains Kristofferson and Walken. Normally riveting, John Hurt is likewise adrift, stuck doing a dishrag reprise of his musing wastrel from Midnight Express. Bridges is wasted as a buffoon, probably his least appealing performance. The cherry pit on top then is the sculpture of monotony Kris Kristofferson, who’s even less charming here than in Pat Garrett And Billy The Kid and A Star Is Born.  To be fair, he’s  certainly an interesting person and maybe a great guy, and he did become a viable character actor, especially in villain roles (most notably in Lone Star), but as leading man, he was a block of wood.

Even if he was Spencer Tracy he, nor any of the rest, would be able to make any sense of Cimono’s jumbled writing, with its chaotic structure, inane repetition (you’re told there’s a hit list of 125 people so many times you may absently try using it as a password), opaque pseudo-meaningful chatter, coarseness (throw in a brutal rape) and wholesale trashing of historical fidelity. Where’d he get the claptrap idea that Wyoming was jammed with columns of Eastern European immigrants, pretentiously posed to look like they belong in a Stalinist propaganda epic from the 30s? There’s nothing wrong with taking a tidbit from the historical record and using it as a base for fictional expression—drama, adventure, polemic, whatever—The Wind And The Lion would be a great example. It helps your audience if it can be somewhat coherent, passably entertaining and maybe a tad illuminative of something beyond an auteurs naked scramble for validation. 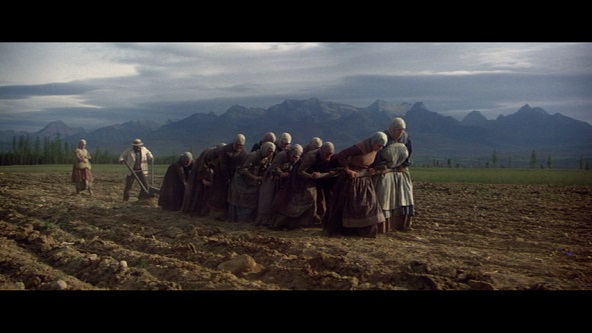 The Marx Sisters in “Rockies on the Volga”

Add a painfully irritating music score from David Mansfield, who also gets so much screen time playing his violin (on roller skates!) that you cross fingers he’ll be the the first person taken out on the hit list.

Toss in cruelty. The big action climax, which, like the other set-pieces, goes on and on, is so ludicrous it may as well be Keystone Kops, were it not for the bloodshed and baldly obvious animal abuse in the horrendous horse falls and wagon pileups; it seems four horses were killed and many injured. When the dust clears (the film’s dulled color palette has enough dust, smoke and haze for six Ridley Scott movies) from the battle, there’s a gratuitous insertion of wrap-it-up violence to make sure you’re finally ready to shelve patience, grab a friggin’ shotgun and seek out whover the hell green-lit this project.

No, horses can’t be “trained” to not break their legs and necks at full gallop in front of a wagon. The ASPCA was banned from the set.

Cimino ducked off the radar for five years, but he didn’t learn from the pause: his later Year Of The Dragon, The Sicilian and Desperate Hours were all duds, overdone and under-cooked.

Grit being true: The Johnson County War was a nasty little incident, yes, but there were 70 people on the cattlemen’s death list, not 125, and casualties were minimal, more on the order of “Shane” or “The Virginian” (both were based off it), not the wild and crazy Little Big Hornish whopper the movie portrays. It also slanders President Harrison.

Recent revisits from some reviewers seek to redeem HG’s reputation. Beauty is the eye of the beholder (or beholden), but then if you’ve ever dealt with a hoarder, you know that’s also true of garbage.

My name’s Jeff and I will be in True Grit later, so cut me some slack, man.