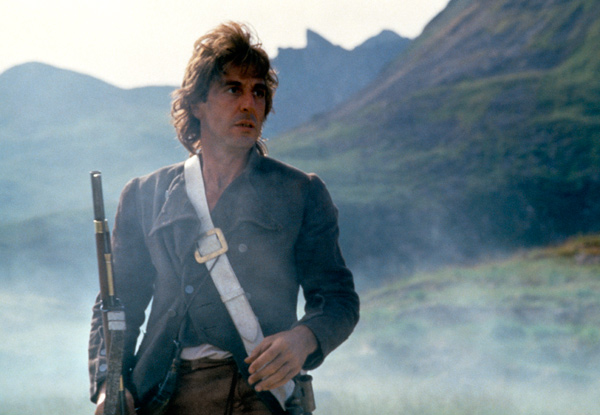 REVOLUTION was put down with extreme prejudice when it started at Christmas of 1985, with withering establishment reviews and unpatriotic ticket sales shredding director Hugh Hudson’s epic and star Al Pacino’s performance like tanks firing point blank into an unarmed crowd. The $28,000,000 period piece was a major failure abroad and a catastrophe in the States, with a devastating Yankee take of only $358,574 (a couple of those came from me). The 2009 re-edit that Warner’s kindly allowed Hudson let him trim about 10 minutes from the original 126 and add a crucial voice-over narration from Pacino. That that helps clarify missing linkage from the choppiness of yore, when the studio forced the film into release before it was properly finished. While not a rediscovered masterpiece, with qualifications it’s a much better experience in the newer version. *

July 4, 1776, the harbor in New York City. Widowed fur trapper ‘Tom Dobb’ (Pacino) and only surviving child ‘Ned’ (Sid Owen, 13) arrive from remote regions up the Hudson into the riotous town just in time to have their boat confiscated by the rebels. Among the throng is freedom-struck ‘Daisy McConnahay’ (Nastassja Kinski), daughter of an adamantly Tory family. Gulled into conscription to the ragged Continental Army, Tom and Ned survive defeat in battle, assorted humiliation and brutality from the British, endure Valley Forge and beyond to the final triumph at Yorktown (the older Ben played by Dexter Fletcher, 19). Violently changing the reins and rules of society makes for a costly education all around.

Traditionally, the movie-going public has rarely been bitten by the Revolutionary War bug, so that would account for at least some of the dismal response: did the film-makers research the success of other go’s at the subject before sinking in all those pounds/dollars? As far as critical reception, it was so hostile that it effectively stalled the careers of both Hudson (Chariots of Fire, Greystoke) and Pacino, who went off-screen for four years, back to the stage. The movie—in the form it then had—was a curious, choppy letdown, but the gratuitous overkill went beyond balanced objectivity into bleachers-safe, pile-on cruelty. * 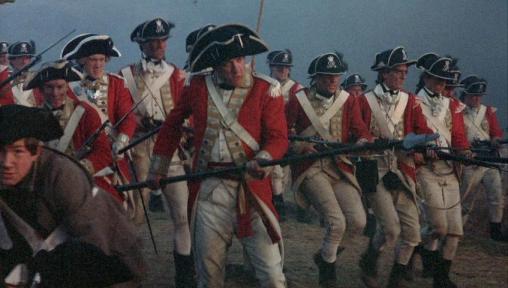 What’s so wrong with it?  The story feels incomplete, moving in fits and starts, after a rough and excessively chaotic opening, needlessly done in pelting rain;it feels like directorial affectation. There’s a pointless cameo from Eurythmics vocalist Annie Lennox as a screeching trollop. Kinski’s role is poorly developed: at 24, the actress was in flavor at the time and she works with vigor, but the writing and editing undercuts her. The script by Robert Dillon is not strong (a lousy track record includes Prime Cut, Flight Of The Intruder, French Connection II). Donald Sutherland plays a brutish Redcoat sergeant, complete with a grotesque, quarter-sized hairy wart on his face and an accent that wobbles (though not quite as much as those he tripped over in both The Eagle Has Landed and Eye Of The Needle).

Otherwise, some of the complaints that barraged the picture earlier—Pacino’s accent, his very presence even, and the use of locations in England rather than America—as if that was disloyal, don’t hold up. Pacino, 34, crafted a voice that was a feasible capture of someone who had several regional influences to his makeup: there’s nothing wrong with his performance, underplayed with a quiet forcefulness, unless you think everyone in the polyglot America of the time looked like Thomas Jefferson. He does a fine job on the added narration. 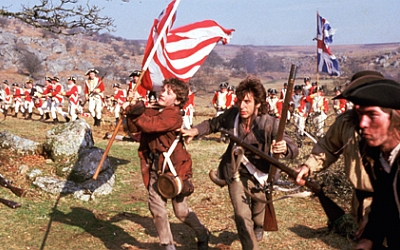 The atmospheric English locations, at Kings Lynn in Norfolk, Dartmoor in Devon and the coastal cliffs near Challaborough Bay work quite well suggesting the unspoiled rural landscapes of the time and the raucous jumble of old Manhattan. The action sequences, especially the large-scale recreation of the battle of Long Island (or Harlem Heights?) are vividly staged. Costumes, sets and props are impressively detailed, and the sense of a desperate and unequal contest comes across. It’s intended as a you-are-there human story rather than a tell-all lesson about the conflict.

With Joan Plowright and Steven Berkoff. Graham Greene has a small part with no lines, and Robbie Coltrane can be glimpsed if you don’t blink. **

* The only movie about the American Revolutionary War that ever did decent business was The Patriot, from 2000. A big, handsome production with a bogus screenplay, it was buoyed by the then-popularity of Mel Gibson. Otherwise, the subject has a tradition of warding away audiences. Worthy or not, the public never took to such examples as The Howards Of Virginia, The Devil’s Disciple, John Paul Jones, The Scarlet Coat or 1776. As for now, we seem so far away from any revolutionary spirit or spark that we appear in danger of bowing down in re-submission to aristocratic tyranny. 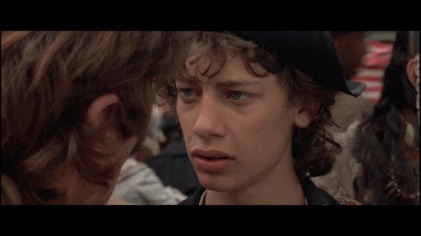 Off the rabble-rouse soapbox: give this flawed, impassioned effort a fresh look. Save your cat-o-nine lashings for a real offender. God Save the King, try to sit through Heaven’s Gate: now that really is a revolt-inciting p.o.s.

** Re-watching–and re-appreciating–this maligned picture had a bonus of becoming more aware of the progressive success of English actor Dexter Fletcher (older Ben), whose face I recalled from 1984s The Bounty and the 2001 mini-series Band Of Brothers. A well-seasoned 54 in 2020, his host of assorted credits includes taking over the direction of Bohemian Rhapsody after Bryan Singer was fired, and full credit handing of Rocketman. 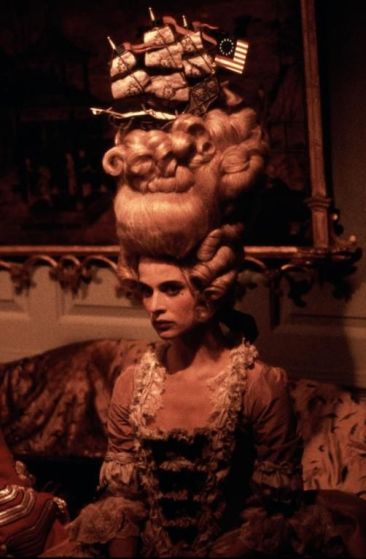 One thought on “Revolution”