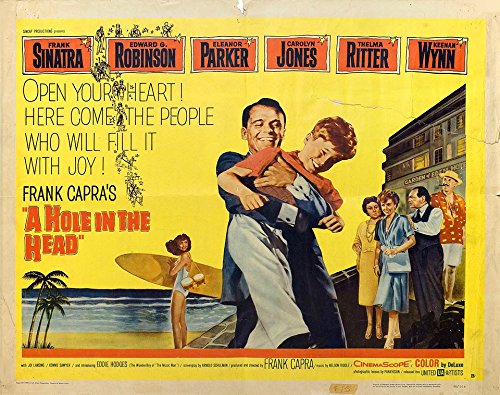 A HOLE IN THE HEAD, Frank Capra’s 1959 return to the director’s chair after eight years, was very popular, 16th place among moneymakers for the year.  It holds a certain nostalgia cachet from those who enjoyed it back when Eisenhower complacency was about to make way for Kennedy frontier exploring.  Sturdy cast aside, the fairly pessimistic comedy’s greatest mark on posterity is the Oscar-winning tune “High Hopes” : the cheery Jimmy Van Heusen/Sammy Cahn tune was briefly used as a theme song by JFKs presidential campaign. Simultaneously hip and square, the plot and presentation are dated stuff—it was a tad old hat even then—lesser Capra, but slickly put over by a lineup of pro performers.

Widowed and wishful washout ‘Tony Manetta’ (Frank Sinatra, 43) runs the friendly but fading Garden of Eden hotel in Miami Beach. In hock as usual, he’s about to be evicted, and looks to lose his plucky and adoring son ‘Alvin’ (Eddie Hodges, 11) to his tired-of-rescuing-Tony older brother ‘Mario’ (Edward G, Robinson), who will only help if Tony agrees to dump his beatnik chick ‘Shirl’ (Carolyn Jones), and marry nice—more conventional—widow ‘Eloise’ (Eleanor Parker). Tony hopes to save the day and his bacon by convincing big-shot promoter pal ‘Jerry Marks’ (Keenan Wynn) to invest in a bring- Disneyland-to-Miami scheme. Will the right people be romping in the South Beach sand at sunset, come finale? Ever see a Frank Capra movie before?

Would you trust a guy named ‘Jerry Marks’, played by Keenan Wynn?  Eleanor Parker was still a dish at 36, but would you not pause before giving the cosmic door to Carolyn Jones?  Will Walt Disney see this and decide to plow up Orlando 12 years later?  Sinatra—who’s committed here and very good, playing one his more likable hucksters (not a heel like Pal Joey)—does another of Capra’s flawed but decent, besieged heroes, though the tone is more dour, the idealism vs. oppression template of Longfellow Deeds, Jefferson Smith, John Doe and George Bailey given way to the gnawing ennui of the Late Ike Age.

“Introduced” here, freckled carrot top Eddie Hodges holds his own, if being a bit on the squeaky side, as per movie tykes of the era. Parker has a rather thankless part—her character is poorly written and makes little sense beyond a plot device. Jones, 28, hot legs and pout on simmer, with bongos, surfboard and attitude steals every scene she’s in. Robinson, 65, doesn’t look much like he’d be Sinatra’s brother, but he still punches above his weight.  While his continual hectoring “bum!” at his brother wears thin, he’s more bearable than Lee J. Cobb bellowing same-same at Frank four years later in the cringe-worthy Come Blow Your Horn. Luckily, Robinson has the indefatigable Thelma Ritter, 60, playing his wife; they joust off each other so well you wish they’d also been teamed in a straight family dynamics drama. *

Apart from the TV-plain sets, there was a good deal of exterior work done in Miami, around South Beach (such as it was way back), at the Fountainebleu Hotel and on the Flager Dog Track, though the night-time surfing shots of Carolyn Jones were done on the sands of Hollywood Beach in Oxnard, California, so surprised Floridians can muse over the presence of the Channel  Islands in the distance.

The screenplay by Arnold Schulman, from his play, was rewritten, uncredited, by longtime Capra associate Myles Connolly. Capra, co-producing with power-player Sinatra shadowing, pulled it off for $1,890,605. High hopes were realized when it grossed $14,200,000.

* Much missed Carolyn Jones was an item in 1959. With her recent Supporting Actress nomination from The Bachelor Party, sexy moll in Baby Face Nelson, and vamping of Elvis in King Creole already racked, she scored three more plum roles that year, in the well-reviewed Career (with Frank buddy Dino), testing Kirk Douglas and Anthony Quinn on Last Train From Gun Hill and offering the only spice to Alan Ladd’s snoring The Man In The Net. ‘Mortician’ immortality wiggled and purred five years down the line.

Eddie Hodges got off to a big start, and followed by landing the 1960 lead in the first color & widescreen version of The Adventures Of Huckleberry Finn. He recorded a popular 1961 song, “I’m Gonna Knock On Your Door”, but movie work was scattered: he lost the bug and went on to a career as mental health counselor. In 2005, Eddie rode out Hurricane Katrina, coming through okay after 19 days without water, electricity and phone or internet contact. Before his movie debut, Eddie had played the little tyke in The Music Man on Broadway in 1957, but by the time they filmed it in 1962, he was too old, so the part went to another ginger snap, and 7-year-old Ron Howard became ‘Winthrop Paroo’, struggling to pronounce ‘Amaryllis‘.