BLACKkKLANSMAN is director Spike Lee’s 2018 take on the book “Black Klansman” by Ron Stallworth, about bizarre late 1970s episodes in his work as the first African-American cop in Colorado Springs, Colorado. Lee and three other screenwriters took the basics of Stallworth’s tale and embellished the hell out of it with fictionalizations to suit both the current rotten state of affairs in Trump’s mouth-breathing Magaland and Lee’s career-long exploration of the country’s festered racial problems. Wildly over-praised, some of it works—chiefly a few vivid characterizations—but much of it falls flat with a splat; tonally askew, terribly written, sledgehammer obvious.

Determined to make both his mark and change for the better, rookie Ron Stallworth (John David Washington) moves from the thankless records room to doing an undercover assignment keeping tabs on Black Power advocates. He sparks a relationship with student radical ‘Patrice Dumas’ (Laura Harrier), who’s unaware he’s a “pig”. Then he has the brainstorm to fool the local Ku Klux Klan chapter into recruiting him—the “him” being impersonated by fellow cop ‘Flip Zimmerman’ (Adam Driver), who is helpfully White, but also Jewish, which he then has to conceal from the hate-soaked Klansmen, one of whom, the vicious ‘Felix Kendrickson’ (Jasper Pääkkönen) is extra suspicious. Things come to a boil when “Grand Wizard” David Duke (Topher Grace) shows up to personally induct Stallworth’s alter ego Flip into the Brotherhood of the hooded. Just writing “Grand Wizard” feels equal parts ridiculous and sickening.

Neat setup, but Lee and the screenplay clutter the 135 minutes with unconvincing relationships (the deal with the girl is fiction, and the action incidents with Flip, Stallworth and the K-K-Klowns are pure fancy as well) and flatly unfunny comedic insertions. There’s a boneheaded opener segment with Alec Baldwin that completely tanks. Lee’s trademark angry/funny riffs feel forced this time, the romantic angle with the girl doesn’t work at all—the stiff Washington has no chemistry with the fetching Harrier—and the ham-fisted narrative is about as subtle as the idiot rednecks it targets.

Ironically, the element that works best is the casting and acting of the bad guys—Finnish actor Pääkkönen is believably creepy, and Grace does a slick job as the slimy-slick Duke. New character ace Paul Walter Hauser makes the moron most of ‘Ivanhoe’ and Ryan Eggold is good as the somewhat saner chapter president. “Somewhat” being relative.

Somehow, the scattershot screenplay won an Oscar. Nominations went up for Best Picture, Director, Supporting Actor (Driver), Music Score, and Film Editing: we call nix in every instance. Driver is an excellent actor, but he doesn’t have to stretch much here: it’s a good performance, but the nomination was token. Washington, 34, is Denzel’s son, but little of the father’s fire comes through. Quiet fire comes in a cameo speech from Harry Belafonte, relating a horrific atrocity from the Jim Crow days. 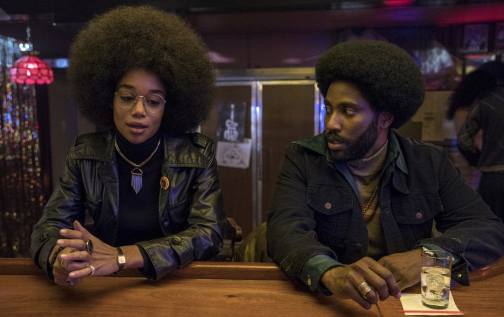 Done for a thrifty $15,000,000, it grossed $93,401,000, ranking 58th place for ’18, and was Lee’s 6th most successful film (in the US) of his 25 feature films. Most arresting visual moment, a credit to Lee’s input, cinematographer Chayse Irvin’s skill, or both, is near the finale, when a burning cross is reflected in the eyes of a hooded Klansman: it’s an inspired and suitably eerie vision. Likewise disturbing is the footage of the supremacist marchers at the 2017 Charlottesville, Virginia incident: sick and scary. 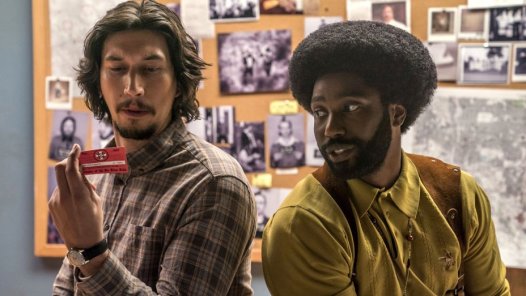 * The ain’t it cute title card at the beginning says “Dis joint is based on some fo’ real, fo’ real s—”  Well, sort’a. Washington was 13 years older than Stallworth was when he joined the department at 21, in 1972. He didn’t do the Klan scam until 1979. His white counterpart was not Jewish, that’s an invention for the movie. The bomb stuff didn’t happen. Most of the actual investigation took place over the phone, hardly a cinematic setup. The final movie conversation between Stallworth and Duke, with the hoodwinked honky getting humiliated may get laughs from the audience, but sadly it never occurred. 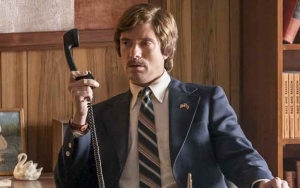 One thought on “BlacKkKlansman”