GHOST IN THE SHELL, the 2017 Hollywood live-action remake of the 1995 animated version from Japan, is an eye-zapping production design extravaganza, with a fiercely determined Scarlett Johansson kicking future rumpus like there’s no tomorrow—at least one we want to be part of. How many science-fiction movies paint a cheery picture of the future?

In the not-distant-enough times to come, humans will be augmented with cybernetic “improvements”, so pesky issues like strength, brainpower, eyesight and the ability to shoot automatic weapons at moving targets while cartwheeling off buildings will be just a matter of resetting your hard drive. Terror attack survivor ‘Mira Killian’ (our girl Scarlett) has had her brain implanted into a body that can do amazing stuff (so much for Johansson’s not exactly chopped liver form) for her ‘savior’s/employers, in tracking down terrorists (who will have a lot to piss them even more off in the future). The standard “terrible secret” will be revealed, but not until lots of people-bots have been blasted into so many chips.

“We cling to memories as if they define us, but… they really don’t. What we do is what defines us.”

“Hollywood version” is a bit of a pretzel situation, in that while the lead actress and screenwriters are American, director Rupert Sanders (Snow White And The Huntsman) is English, filming was mostly done in New Zealand and the supporting cast hail from France, Denmark, Australia, Japan, Singapore, Britain, Zimbabwe and Romania. Who can trace where all the money came from?

Justifiably praised for the dense dazzle of its futurescape city (some location work was done in sky-piercing, neon-drenched, halfway-there-already Hong Kong), tricked up with wildly imaginative production design by Jan Roelfs, and for the always intense and intriguing leading lady (in skin-tight bodysuits that worshipers of SJ will drool over), it also drew criticism for the been-there script, and self-righteous flak on the home front over having what was originally a Japanese character played by a pretty white–and “pretty white”—actress. * 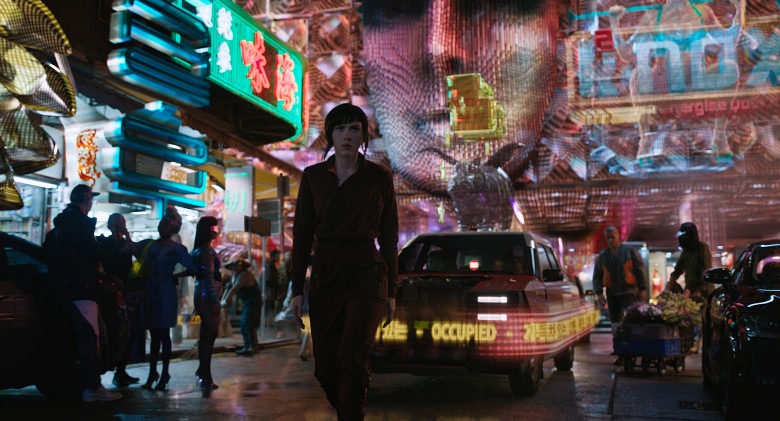 While those unfamiliar with the source material will find this echoing items like The Matrix or A.I. ,the original film, offspring of a highly popular and influential manga series and entertainment franchise, had in turn been influenced by the likes of the first Blade Runner. “He who is without a borrowed idea, cast the first editorial.” The film cost $110,000,000, so figuring in the marketing costs, it emerged as a bomb by only taking in $169,800,000.

* While the p.c. riot squad in the U.S. ever-so-predictably squawked to high anxiety over “whitewashing”, the Japanese weren’t unduly bothered. Mamoro Oshi, director of the 1995 original :”I believe having Scarlett play Motoko was the best possible casting for this movie.” Domo Arigato Gozaimasu.