BOY ON A DOLPHIN commands viewing for its visual splendors: the timeless architecture of classical Greece and the glorious scenery of the country’s once-pristine islands, and for the spectacular international introduction of another natural regional wonder, former war waif Sofia Scicolone, emerging like a goddess from the sea as the 22-year-old Sophia Loren.

Greece, the Aegean Sea, the island of Hydra: when sponge-diving local girl ‘Phaedra’ (Sophia) finds an ancient statue on the sea floor, she and her smug Albanian boyfriend (a boyfriend of hers would qualify as ‘smug’ if he came from Argentina or Alaska) play off a payoff between an archaeologist (Alan Ladd), who wants to see the treasure end up in the country’s national museum, and an idly rich, morality-shy art dealer (Clifton Webb) who values profit over pride.

In Greece to casually study busts

Directed by craftsman Jean Negulesco (Johnny Belinda, Titanic), scripted by Ivan Moffat (an interesting rake of a guy) and Dwight Taylor, from a novel by the prolific and personally intrepid David Divine, as a drama it’s tepid and as adventure it’s tame as golf. It would have worked marginally better in either zone if Alan Ladd hadn’t been in a lousy mood and didn’t drone in one of his weakest performances. There’s zero chemistry between him and the energetic Loren: he acts like he’d rather cuddle up to a bottle of Ouzo. The asterisk dungeon below holds teaser clues to their treasure stunting. *

C’mon, man, what do you think ladders are for?

Webb, although he was felled by pneumonia during the shoot, looks like the Aegean beaches agreed with him, and he handles his typically disdainful aesthete role with ease. Loren shows both pros up, and not just with her looks. English was still new to her–she’d learned it on The Pride And The Passion, which was filmed before this (released after) and rips it out a mite fast, but that’s what the character calls for. The men are dull, she’s anything but. The famous introductory shot of her clambering aboard the fishing boat is a breath-catching classic: you have to wonder how many guys choked on popcorn when they saw this?

Next to La Loren, Milton Krasner’s cinematography of the glorious locales is pure CinemaScope pleasure. This was the first time Hollywood shot a film in Greece, and the camera drinks up the Saronic Islands, chiefly Hydra, plus some views of Athens (the Acropolis), Delos, Rhodes, and the striking clifftop monasteries of Meteora.

The leisurely affair (over-padded at 111 minutes) is also graced with an atmospheric score composed by Hugo Friedhofer, which netted the picture an Oscar nomination.

* Time to dutifully regurgitate what every other reviewer reports——-this was Sophia’s first English-language picture, followed three months later by The Pride And The Passion, with Legend Of The Lost showing up in December. Her ‘exposure’ here sent a pulse-wave around most of the male moviegoing population, though for some reason Ladd was indifferent. Loren, quoted:  “He was always polite but never seemed to want to have any social contact. I liked Alan, but he didn’t seem to like me. I couldn’t understand it.”

I’m not tall, and it always rankles me to see people described as “diminutive”–it’s a form of accepted prejudice, literally belittling someone for something they have no control over. In Ladd’s case, he was a few inches shorter than the statuesque Neapolitan bombshell, and the rug-beaten lore of the picture has him standing on boxes and her walking in trenches to even out the height differential. What doesn’t level off is his narcoleptic delivery vs. her obvious zeal.

The ’53 Ferrari 375 America coupe Webb gets to drive

Dependable studio pro Jean Negulesco had directed the waspish Webb in Three Coins In The Fountain and Woman’s World, and to one of his best performances in Titanic, but he could barely rouse life signs out of the disconsolate Ladd. As for the casting of Ladd against Loren, in his autobio “Things I Did and Things I Think I Did”, Negulesco said “It sounded then and sounds now pure insanity.” Not one to shy from bracing reality, of the leading ladies famous climb onto the boat at the start, he offered “When Sophia surfaced, her lovelies were pointing at us with daring accuracy. The still man dropped his camera. The soundman raised his boom. The Greek laborers were thunderstruck. It was simply too good to record only once. I repeated takes and retakes of the wet dripping yellow dress to my enjoyment and the crew’s appreciation.”

Part of Ladd’s funk was his worsening alcohol and self-image problem, no doubt amplified next to the sensually intimidating newcomer. It probably didn’t help that on the way to Greece, on the Orient Express, he and his wife were robbed of her best jewelry and his evening clothes.

When your blog host was wee, seeing this flick on NBCs Saturday Night At The Movies in 1961, the CinemaScope & color travelogue negated by pan & scan scrunching on a black & white TV, and whoever ‘the girl’ was not yet smacking the “Charge!” button on my hormone panel, I was not impressed. Mindful of history (thanks Mom, Dad, and Walt Disney), I kept detailed lists of the movies I saw, and rated them, from 0 to 100, yet (this is how future reviewer types start developing their disease—and, yes, I played softball, cowboys and army, had a dog and rode a bike, thank you), and I dimly recall awarding this one a 15. “What scenery?”, a few years shy of panting over That Which Was Unobtainable, at least my script intuition was on target.

We might be light on archaeology, but we’re keen at unearthing the 50s flurry of flicks digging at the topic: Robert Taylor excavating Egypt’s Valley Of The Kings, Glenn Ford to Mexico for Plunder Of The Sun, Charlton Heston in Peru looking for the Secret Of The Incas and John Wayne searching Libya’s Legend Of The Lost (with La Loren in tow). And you whippersnappers thought Indiana Jones was a hot shot… 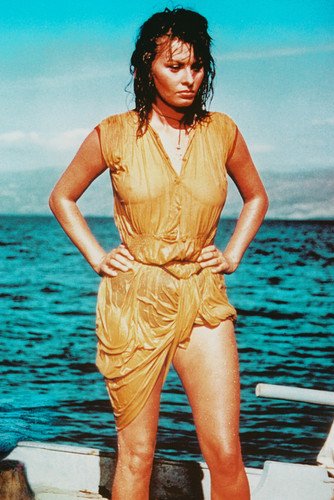 followed by emergency invention of pacemaker

One thought on “Boy On A Dolphin”