OLD ACQUAINTANCE, a popular ‘woman’s picture’ from 1943, plays an even split between saucy comedy and bittersweet drama, its tart script by John Van Druten, Lenore Coffee and Edmund Goulding based on Van Druten’s play. Vincent Sherman directed—or as he put it, “refereed“— rival divas Bette Davis and Miriam Hopkins. Thanks to the actresses—Davis in particular—and some good dialogue, it’s a reasonably entertaining oldie, even for those who might not be inclined to sit still through it—a wild guess would be like about 90% of straight men?  It’s also one of those productions that whelped bitchy backstage baggage at least as fun as what was on screen. *

“It’s late, and I’m very, very tired of youth and love and self-sacrifice.”

It’s 1924, and authoress ‘Kit Marlowe’ (Davis) returns to her hometown, to lecture and talk about her new book, but also, mainly, to reconnect with her best long-time friend ‘Millie’ (Hopkins), now married, pregnant, happy (well, sort of) and giddy to let Kit know she’s been writing as well. (!) Over the course of two decades, unmarried and childless Kit, whose serious writing receives only marginal credit, long-suffers as her unbearably vain BGF (substitute ‘bitch’ for ‘best’) makes a fortune writing trashy bestsellers and loses her kindly husband (he loves Kit, but they’re too ‘civilized’ to hurt Millie: horsewhipping may occur to you along the way.  Kit also does a better job mothering Millie’s ignored daughter. What’s a lifelong friendship without a little bitter jealousy?

As in so many films of the genre during its heyday, the men are about as dynamic and interesting as spending a nice summer day selecting tiles for the bathroom. John Loder plays Millie’s husband, newcomer Gig Young is a younger guy Davis finally agrees to marry, only to find he’s fallen for Millie’s now-grown daughter (Dolores Moran, a 17 year-old pinup girl). After taking Millie’s abuse from Prohibition to Pearl Harbor, Kit finally releases a beautifully executed “shakedown” of the insufferable frenemy. Then they make up over champagne (the two guys meanwhile are merrily off to the relative safety of war).

“There comes a time in every woman’s life when the only thing that helps is a glass of champagne.” True, for men, too, though experience recalls it’s best to stop after two bottles.

Hopkins is amusing, if over-the-top theatrical (the horrid Millie might not deserve a buggy whip, but don’t rule out tar & feathers), while Davis gets to enjoy one of her most relaxed and sympathetic characters. The men could be played by cardboard, emotions zigzag like fireflies, Young and Moran fall in love over about 45 seconds. Enough cigarettes are smoked to blur out the Sierras.

Sherman’s deft handling of the feuding femmes managed to bring the 110 minute meller in for $1,070,000, and all concerned were pleased with the public response, as ladies shying of war pictures trooped in for the girlunfriend-power to the tune of $6,500,000. With Roscoe Karns, Anne Revere, Esther Dale.

Remade by George Cukor in 1981 as Rich And Famous, with Candice Bergen and Jacqueline Bisset. The last film from Cukor—the most applauded (better or worse) “woman’s director”—it drew scathing reviews.

* Bette bests: “Miriam Hopkins and I didn’t exactly get on. I mean, she was murder! Her great tragedy was jealousy. Oh boy! There was a scene in that movie where I have to shake the daylights out of her. And I was really ready for that scene. As I walked onto the stage one of the technicians  whispered in my ear ‘Let her have it!'”   Like Davis, Hopkins had a well-earned rep for being an armful, but she had extra venom going since Bette had supposedly boinked Hopkins husband (director Anatole Litvak) a few years earlier when the two fire-breathing damsels worked together on The Old Maid. 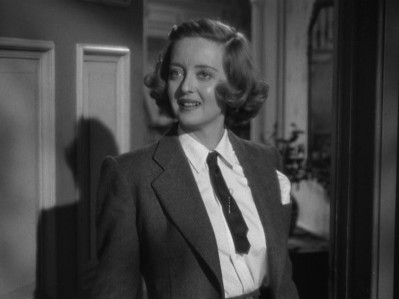 Sherman: “A director must be a good storyteller. He must know how to establish interest in his characters and their problems so that an audience will be anxious to know how the problems are finally solved. The skill with which he builds the conflict and keeps the suspense going until the final resolution is the test of his ability to entertain.”

From The Guardian: ‘According to a friend, Sherman, who had the virile looks of a middle-weight boxing champion, discovered a way of dealing with difficult leading ladies: “He went and slept with them. After that, the next morning, they were angels.” Sherman applied this therapeutic approach to Davis, Joan Crawford and Rita Hayworth.

The horror…The standard ‘these-heels-are-killing-me’ cachet on “women’s pictures” (an odd phrase with which to downplay half the population) was that the man (it was always a man) who directed them, by some special pixie elixir had to be a guy who somehow understood women better because he did not want to—perish the thought—sleep with them, i.e. George Cukor. For my money, that lazy, self-serving crock insults everyone. ‘The prosecution calls Vincent Sherman…’

For more on the too-overlooked Mr. Sherman, go for his frank and fun autobiography “Studio Affairs: My Life As A Film Director”.

Brit-turned-yank John Loder lived to be 90, having survived WW1 action in Gallipoli and The Somme and being captured by the Germans. He then ran a pickle factory in Potsdam! Was married five times, including a 4-year hitch to Hedy Lamarr. So maybe the guy wasn’t so boring after all. His 1977 autobio was entitled “Hollywood Hussar”.

Gig Young spent WW2 on Coast Guard duty in the Pacific, then pulled years as a reliable light lead, scoring Oscar nominations for supporting Come Fill The Cup and Teacher’s Pet and finally nabbing the golden guy in 1969 for a brilliant job in They Shoot Horses, Don’t They?  Like Mr. Loder, he went through five marriages (one to Elizabeth Montgomery). His alcohol & depression-troubled life ended his final betrothal with murder-suicide in 1978. Young, 65, and Kim Schmidt, 31, had been married for just three weeks. They’d met working on his last movie, with the “No, really?” title Game Of Death. He’d been receiving psychiatric ‘treatment’ from controversial psychologist Dr. Eugene Landy, later professionally decertified for his curative ‘work’ on Brian Wilson (see the superb Love & Mercy). In a TV show he made back in 1958, Gig’s final line was “Do I look like a man that would murder his own wife?” 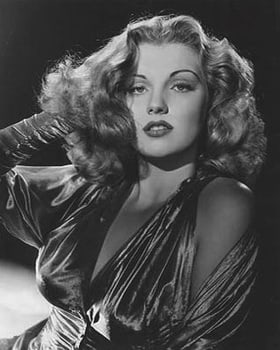 What the Tigers were Flying for.

Bombshell starlet Dolores Moran was so hot as a G.I. pinup that the Flying Tigers called her their ‘Tiger Girl”. Her non-fuselage career, which included an affair with Howard Hawks during the making of To Have And Have Not, eventually stalled out. Hawks biographer Todd McCarthy reports that the director’s wife, Slim, aware of the fling, referred to the young tease as “Dollarass Moron”.  Miss Moran certainly made one whammo of an impression back in 1941, when as a 15-year-old car-hop she served a cup of java to an apricot grower named Anthony Ponce.  He never saw or contacted her again, nor said anything to family members: when the reclusive bachelor died in 1968, his 1947 will provided that she inherit most of his $300,000 estate, including—in an extra touch of gallantry—an apricot grove. The amount was reduced but the will held. Dolores, then a 42-year-old divorcee, admitted that “unfortunately, for the life of me, I can’t remember the man….life is truly an extraordinary procession. What a beautiful thing. It’s phenomenal. I’m not living in poverty, certainly. But my reaction was one of marvel, awe.” She passed away in 1982.

Meanwhile, we urge the reader to check out the keen write-up over on ‘The Blonde At The Film—https://theblondeatthefilm.com/2013/12/12/old-acquaintance-1943/

….and now that I’ve dutifully chocked up another “Okay, guess I better see this” item, maybe I can recover through revisiting something else from 1943, perchance more to my Boy Philosopher tastes—–hmmm (rubs calloused Neanderthalian hands)…Destination Tokyo? Guadalcanal Diary? Frankenstein Meets The Wolf Man?……