GUN CRAZY—–“Two people dead, just so we can live without working!”  This cash-math problem bothers small-time robber and weapon-friendly ‘Bart Tare’ (John Dall), but it doesn’t twitch an irk in his girlfriend accomplice, ‘Annie Laurie Starr’ (Peggy Cummins), who can not only shoot straight but enjoys shooting straight at people who are either on her s-list or otherwise inconvenient to her lifestyle. Bart’s a patsy, Annie’s a vixen, and we’re along for their ride to hell (literally a swamp) in this low-budget, high-octane 1950 noir that beat Bonnie And Clyde to the draw by 16 years. *

MacKinlay Kantor and Millard Kaufman (fronting for blacklisted Dalton Trumbo) wrote it, Joseph H. Lewis directed, with Victor Young on the score and Russell Harlan (Red River, The Thing) manning camera. It was produced for $400,000 by legendary budget boys the King Brothers, Maurice & Frank, whose crime flick roster includes titles like I Killed That Man, Rubber Racketeers, I Escaped From The Gestapo and the 1945 Dillinger, which made a bundle and draws a heap of praise (I think it’s a stinker, sorry). Before finding their forte in B-movies, they’d turned $250 into a slot machine business that took in loot from 19,000 of the gadgets. They also anted up later for the 1961 monster classic Gorgo. 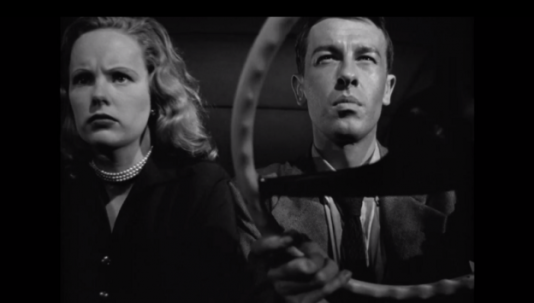 Speakin’ a dough: well, Cogerson has this coming in 133rd place for the year, which seems ball park, but gives its gross as a redemptive $2,400,000; other sources, including Peter Bogdanovich’s interview with Lewis, said the picture, though it was raved over by industry insiders, was a barely released flop under the original title Deadly Is The Female, and fared little better when it re-emerged months later with a title change.

Down the road, critics and genre fans rediscovered the 87-minute crime-spree/twisted love match, extolling the directorial skill of Lewis in evoking a charged atmosphere with both long takes and tight close-ups, outfoxing budget restraints with cinematographer Harlan’ expressionistic lighting and off-beat angles. They especially salute the now-famous bank robbery sequence, filmed in a single four-minute shot that doesn’t even go into the bank but was ginned-up from the back of a Caddy. Harlan filmed in a jockey saddle with the camera on a greased board, the actors improvising, local townspeople of Montrose, California thinking the real deal was going down. The bank folk and local cops were thoughtfully alerted.

“We go together, Annie. I don’t know why. Maybe like guns and ammunition go together.”

The story starts with young Bart always having a firearms fascination, eventually landing him in reform school. Russ Tamblyn, at 14, had just played young Saul in DeMille’s Samson And Delilah, so he graduating from throwing stones at Philistines to packing heat to class like a normal kid. As good as Bart is with guns, he’s not into hurting anything, and when he’s grown (Dall, 29) he gets hired by a sleazy carnival barker (Berry Kroeger). Maybe a nice guy in person, but hardly what you’d deem handsome, Kroeger had a real gift for displaying a corrupt leer. His cruel yuck and Bart’s cool way with a rifle quickly fire the hot-to-shot carnival sharpshooter Annie into Bart’s arms (or gun hand). Annie is bad news: after married bliss runs into money reality, she convinces Bart that they need to get it the easy way (‘ya sap, ya’). We know something’s off when Annie says “Let’s go for a walk on the beach” and Bart’s comeback is “I just read an article about funerals.” 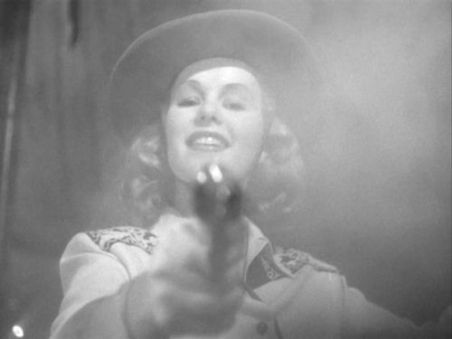 Interviewed 31 years later by author & critic (a really good one) Danny Peary, Joseph H. Lewis dispensed with the discreet on how he counseled Dall and Cummins: “I told John, ‘Your —–‘s never been so hard,’ and I told Peggy, ‘You’re a female dog in heat, and you want him. But don’t let him have it in a hurry. Keep him waiting.’ That’s exactly how I talked to them and I turned them loose. I didn’t have to give them more directions.” There’s more than one way to skin a thespian.

Broad and obvious, John Dall was not a successful actor. After getting a Supporting Oscar nomination for his first film (1945s The Corn Is Green), he only appeared in seven more films (notably Rope and Spartacus)—his role in Gun Crazy is probably his best, certainly the one critics talk over. The more talented Peggy Cummins likewise did not secure big-time stardom, but she did grace the classic horror item Night Of The Demon/Curse Of The Demon. From chilly calm to wide-eyed ecstasy, her trigger-fingering, sexually charged psycho in Gun Crazy easily takes the acting honors for the piece.

* Aside from the obvious Barrow-Parker suggestion, there is also some shadow from Fritz Lang’s 1937 You Only Live Once, which had D.A. secretary Sylvia Sidney and career crook Henry Fonda take their love on the lam. Along with a slew of great westerns, troubled 1950 boasted one heck of a Noir lineup—Kiss Tomorrow Goodbye, Sunset Boulevard, No Way Out, Panic In The Streets, In A Lonely Place, Night And The City, The Asphalt Jungle, The Breaking Point, Where The Sidewalk Ends, D.O.A., Quicksand…. 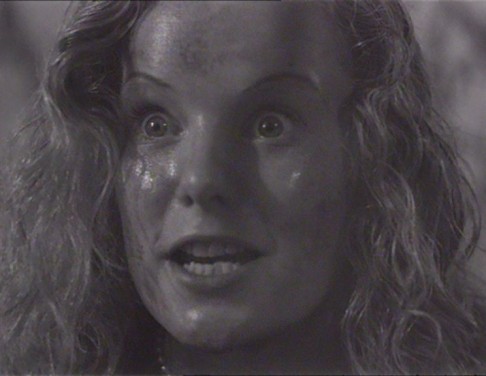