QUANTUM OF SOLACE —–instead of pretzeling myself and vexing an innocent reader by playing word-game cute with the “Huh?” title—let’s cut to the chase and call the second entry in the Daniel Craig packet of James Bond films the weaker sister in an otherwise stellar array. The 2008 sequel to Casino Royale has its strong points, but they’re fought to a draw by nagging weaknesses. It’s not bad, and is certainly more compelling than 10 or 11 of the previous two dozen, but the overall impression left is “Well, maybe the next one will be better”. Like the famous gun-barrel opener the series employs, it shoots itself in the face to start with: that wimpus title is the worst since Octopussy. *

“And Bond, if you could avoid killing every possible lead it would be deeply appreciated.”

Delivering the battered ‘Mr. White’, one of the swine from the previous case, to M in Italy, Bond’s pursuit of further associates—in whatever entity constitutes ‘Quantum’—leads him on a globe-hop to track slimy entrepreneur ‘Dominic Greene’ (Mathieu Amalric). He finds hindrance/help from beauteous ‘Camille Montes’ (Olga Kurylenko). In the wake of his duty and their individual vendettas are a horde of casualties and a ton of collateral damage visited upon several countries. Well, that’s what we pay for.

So what do we get? Too much and not enough (a more apt title), conspicuously leaving out sex or levity in favor of an overall downbeat tone whose seriousness and cruelty is played straight, in contrast to going overboard on mayhem—there are ten action sequences crammed into the 106-minute running time, the shortest in the series. Naturally, the furious movement shows off elaborate stunts and picturesque carnage, and includes chases by car, speedboat and airplane and hand-to-hand duels that would fell a grizzly. They’re amusing but they go a good 30% more than reality could handle, which wouldn’t be so bad if the damn zip-cut editing would hold a shot for more than a half-second. The frenzy becomes a blur and it exhausts more than exhilarates. In his direction, Marc Foster aims for speed and confusion over logic and clarity. He wins, we lose.

David Arnold’s score (his last of five for the series) adds little this time, with only the credit-crawl track at the end providing much ripple. The song bleated over the opening credits is a dud (below).

Continuity suffers–how do Bond’s facial cuts heal within hours? How can the opening car chase go from Lake Garda into a tunnel and emerge in Siena–150 miles away? How could anyone survive that parachute landing? At least Craig has a better haircut this time.

On the positive side, the locales are swell, the script at least exercises out of the usual comfort zone and the acting’s good. Written by the trio who keyed the preceding installment, Paul Haggis, Neal Purvis and Robert Wade, with further tweaking by the director and Craig, the plot addresses geopolitical skullduggery with more acuity than others in the series, with amoral water theft (rights and access) the end game to a fake pro-environment scheme. US meddling in the Southern Hemisphere gets jabbed. “If we refuse to do business with villains, we’d have almost no one to trade with.” **

Speaking of Dicks International, Inc., Amalric based his sleazy villain on Nicolas Sarkozy and Tony Blair. Kurylenko is stunner enough to make you change your major to World Domination. Craig is steely, on simmer.

The locations show off to advantage: Italy (including lovely Siena and Lake Garda), Chile (Antofagasta and the Atacama Desert subbing for Bolivia), Austria (Bregenz for the opera stuff), Baja California, Panama (playing Haiti), Madrid and the U.K.  All the trappings, myriad crews, explosions, 900 visual effects, ruined vehicles and several thousand extras in the crowd scenes helped consume $200-225,000,000. Results had it #7 for the year, a planet-wide gross of $591,692,000 with another several dozen $M on discs.

* Roll out the gun barrel: spare us title-gag-reflexing as provoked with Never Say Never Again, A View To A Kill and Tomorrow Never Dies. Truth being the handmaiden of bluster (don’t think about it), it must be noted that “Quantum Of Solace” was the title of one of Ian Fleming’s short stories featuring 007 (now back to your pizza). Squawking on, “Another Way To Die”, sung by Jack White and Alicia Keys, is the least memorable ditty in the series: you actually forget it while you’re listening to it. 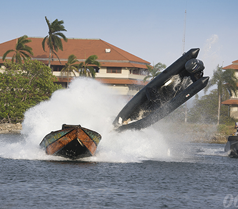 Per the above honk over the blur-like-Bourne style employed, the 2nd-unit director, Dan Bradley, was responsible for the same jarring binks on, yes, The Bourne Supremacy and The Bourne Ultimatum. Thanks, but no caviar.

** Bond offers “You know I was just wondering what South America would look like if nobody gave a damn about coke or Communism. It always impressed me the way you boys would carve this place up.”  To which CIA pal Felix ripostes “I’ll take that as a compliment—coming from a Brit.”  It’s practically a given in the series, going all the way back, that the Americans are flat-footed. No doubt, but that attitude is pretty rich cheek when you take into account the sordid legacy left by years of scandal and betrayal that gut-punched England’s watchdogs. ‘James Bond’ has a better ring than ‘Jeeves Poodle’.