DAVY CROCKETT, KING OF THE WILD FRONTIER, as every Baby Boomer worth their hula hoop knows by heart, was “Born’d on a mountaintop in Tennessee, greenest State in the Land of the Free, raised in the woods so’s he knew every tree“, and somehow managed to kill a bear when he was just three years old (Davy, not the unlucky critter).

In 1955, 54-year-old Walt Disney must have felt like he was on top of the world. His amazing Anaheim, California theme park opened that summer and Lady And The Tramp was the #1 hit of the year. The year before had his 20,000 Leagues Under The Sea as the third-biggest grosser. Frosting on the cake was the gargantuan success generated by three episodes of his new television anthology series. Between the first episode, mid-December of ’54 and the conclusion two months later, a legendary frontier hero of the 19th-Century became a cultural phenomenon of the 20th. The rage for all things Crockett had Walt streamline the 159 minutes collectively shown on TV (in black & white) as Davy Crockett Indian Fighter, Davy Crockett Goes to Congress, and Davy Crockett at the Alamo into a 93-minute color feature to release in ’55, churning up another mound of receipts to add to the sky-high stack.

Directed by Norman Foster, written by Tom Blackburn, the simple but still-entertaining Disney version of swaths of the life led by David Crockett (1786-1836) was designed as kiddie history to be sure, but it at least covers the basics, from exploits as scout for Gen. Andrew Jackson in the fierce Creek War of 1813-14, to national spotlight as a politician in the 1820s, and finally to martyrdom in the characters-rich Texas Revolution against Mexico in 1836.

After seeing Fess Parker do a colorful bit in the sci-fi classic Them!, sure-shooting Walt picked his man, elevating the good-looking 30-year old from bit parts to fame. With a disarming voice and manner, the 6′ 5½” fella from Fort Worth (likely a good six inches taller than the real feller) captured Crockett to suit the imaginations of millions of young viewers. The echoes of cannon fire from the Alamo were firecrackers next to the thunder booms of marketing that exploded across the nation—and into Europe. Before the Davy craze abated, assorted paraphernalia worth $300,000,000 was gulped down in less than a year (roughly $3-billion today) with the mania accounting for nearly 3,000 different items. Coonskin caps sold at a rate of 5,000 a day–the population of raccoons took a serious dip, panicked survivors loping into Canada until Americans regained their composure (then Elvis arrived, our fate sealed). *

“I’m half-horse, half-alligator and a little ‘tetched with snapping turtle. I’ve got the fastest horse, the prettiest sister, the surest rifle and the ugliest dog in Texas. My father can lick any man in Kentucky… and I can lick my father. I can hug a bear too close for comfort and eat any man alive opposed to Andy Jackson.” 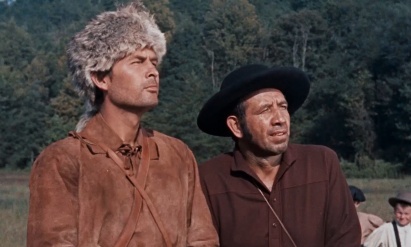 With music by George Bruns and lyrics by Tom Blackburn, whipped up in 20 minutes to use as filler for the episodes, “The Ballad Of Davy Crockett” was a #1 hit, spending six months on the Hit Parade. 41 different artists (Bill Hayes, Parker, Ernie Ford among them) cut versions that sold 10,000,000 platters (one of ’em resting in a box in my closet). The 20 verses used in the series were cut down to just a few for the feature.

The story gives Crockett a trusty pal in the form of fictional ‘Georgie Russel’, warmly played by Buddy Ebsen. First wife Polly has a small role, second wife Elizabeth is left out. Crockett’s political battle with President Andrew Jackson over the Indian Removal Act is managed by having a fictional character take the heat for the vengeful President. The Indian fighting against the Creeks is also simplified (Crockett was not thrilled about that bloody business) and will no doubt draw snarls from more sensitive (if equally snowed by p.c. revisionism) audiences today. Hard times all around (paging the Fort Mims Massacre, anyone? No? Too messy? Doesn’t fit your guilt shelf?). The Texas segment is fast-tracked, and instead of the hunting party of a dozen that drifted into San Antonio and their doom with Davy, he’s given just fictional gambler ‘Thimblerig’ (Hans Conreid doing quite well), a recurring character in Crockett lore, and a solitary brave called ‘Bustedluck’, played by Nick Cravat.

Since it was made for TV, with a limited budget, the action scenes make do with just dozens of extras instead of the thousands called for, but the hand-to-hand stuff is done with furious vigor–again, it was made for kids (John Wayne’s massive The Alamo five years down the road). **

Though the Crockett tide had receded from full flood, the edited feature release did lure enough begging kids to manage to deplete parents of another $6,100,000, coming in #50 during an Americana-jammed year, which included another Alamo movie, The Last Command, with folksy Arthur Hunnicutt a winning homespun version of Crockett.

* The show also gave renewed impetus to Ebsen’s job prospects, leading down the road to another kind of country home companion name’a Jed Clampett. Parker donned buckskins and coonskin cap for two Crockett prequel episodes for Disney, again stitched together for theatrical release in 1956 as Davy Crockett And The River Pirates. Then in the mid 60s, his career in the doldrums, duty/destiny called once more and Fess drew a new passel of young fans with 6 years and 165 episodes as Daniel Boone.

** Coming alive in ’55, I missed the initial craze, although someone (Dad, I assume) made sure I had the duds and gear to play in & with by the time I was old enough to toddle around the backyard fighting invisible bears. The second wave of Crockett fever caught a new group of us in 1960-61, when the shows were re-televised and the mighty John Wayne epic charged into the drive-ins. Two Davy’s? How can this be? COOL is what it was—and remains. 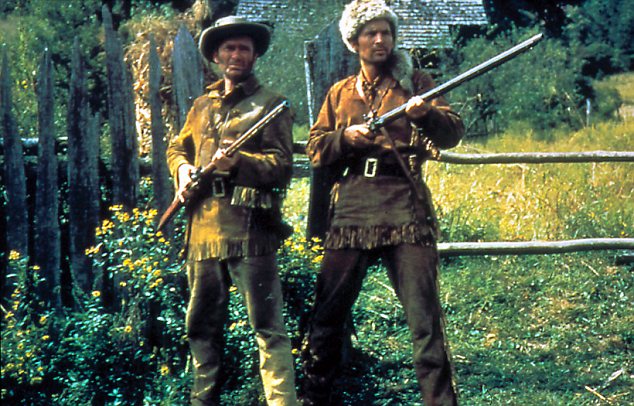 3 thoughts on “Davy Crockett, King Of The Wild Frontier”