LEATHERHEADS  tackled poor-sport reviews and fumbled box-office in 2008, which is a shame, as this affectionate period-piece comedy, starring and directed by George Clooney, plays a good game, with heart.

1925. ‘Dodge Connelly’ (Clooney), game if aging captain of the amiably brawling ‘Duluth Bulldogs’, a pro-football team on the skids, sees a way out, for himself, his loyal teammates, and the discounted sport itself, when he convinces college football star (and war hero) ‘Carter “the Bullet” Rutherford’ (John Krasinski) to take a hike from playing to big crowds for Princeton, and gamble on a season with the Bulldogs. Rutherford’s skill and persona turn the team’s fortunes around. This pleases the likeable young guy’s slick manager (Jonathan Pryce) as well as Connelly and crew, but brassy news-dame ‘Lexie Littleton’ (Rénee Zellweger) has her own professionals sites set—on revealing the truth behind The Bullet’s combat legend, a scoop that’ll cinch her an editor’s job. Ya’ think someone, or three, will sap out and fall in love, even as the Bulldog’s face-plant in the mud of victory?

The script was first written by Duncan Brantley and Rick Reilly (of “Sports Illustrated”), 17 years before cameras finally rolled; later,Paul Attanasio (Donnie Brasco, Quiz Show)  pitched in to doctor. Clooney re-did it (sans credit) to give it more screwball-comedy flair.  Filming was done at assorted locales in Tennessee and the Carolinas, with great attention lavished on period detail. Randy Newman manned the score, which incorporates some way-oldies like Jolson’s “Toot Toot Tootsie, Good-bye”, Gershwin’s “The Man I Love” (smoky rendition by Ledisi Young) and Cohan’s “Over There” (first rousing, then plaintive). 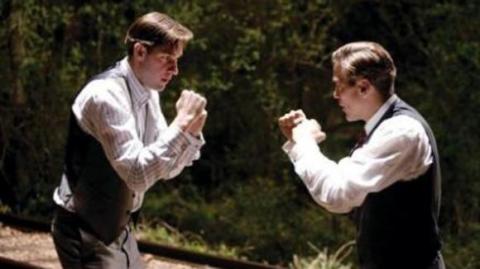 Back in the Roaring 20s (when World War 1 was called The Great War, as there was not yet a need to number it), college football was a big deal, whereas pro teams were still in the roughhousing stage. The script is loosely riffed off the long-melted Duluth Eskimos, Clooney’s character kind of based on “Blood” McNally, Krasinski’s on “Red” Grange. Pryce’s manager takes a page from real-life C.C.Pyle, and Zellweger’s Girl Friday cuts a cue from the type of sassy gal once played by the likes of Rosalind Russell.

The caboodle cost $58,000,000, but the worldwide gross was a tad less than $41,300,000.  The 76% of the take that came domestically put it only 95th place for the year, ranking as a major dud. Too bad, as it’s brightly written (thank you George), engagingly acted and well-directed (again, credit the star). A pleasant surprise, especially given the sniffing tone of many reviews. Fun sight gags and repartee. 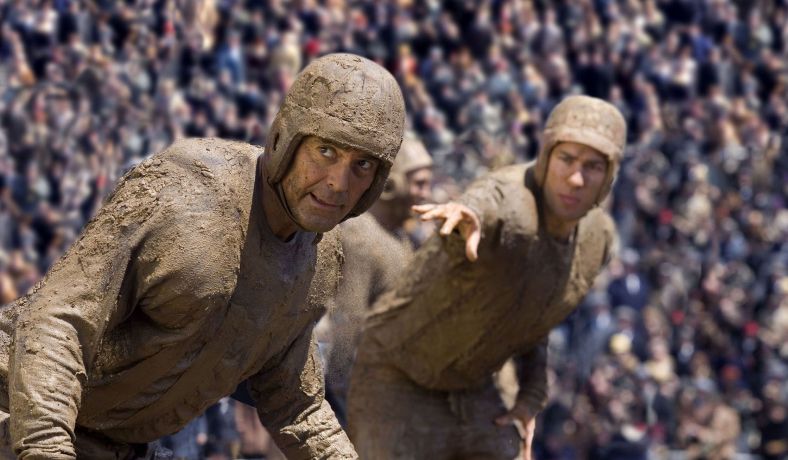 One thought on “Leatherheads”