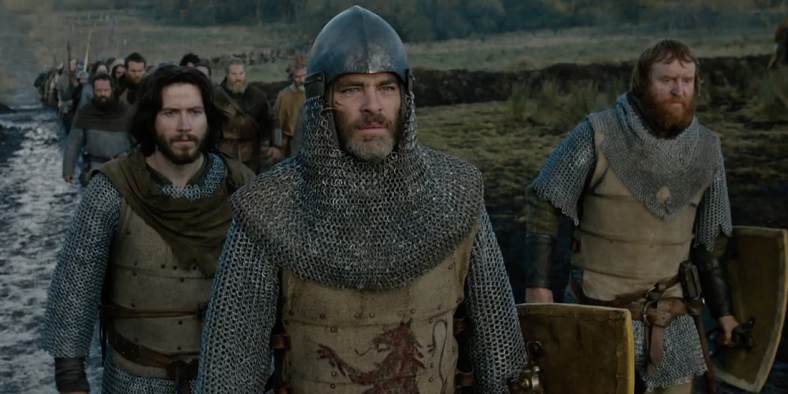 OUTLAW KING , a handsome 2018 epic given a perfunctory theatrical release but mainly cued for Netflix, picks up where Braveheart left, taking the character of Robert the Bruce, played in the Mel Gibson classic by Angus Macfadyen, and following his track to glory. In this telling, Chris Pine takes on the mantel of portraying Scotland’s revered hero.

Directed by David Mackenzie (Hell Or High Water), who co-wrote the script with Bathsheba Doran and James MacInness, the $120,000,000 production covers a three year period from the peace treaty forced by Edward I, and then the murder of William Wallace (offscreen), to the Bruce’s daring victory over the English at the Battle of Louden Hill in 1307. The telling wraps up then, without covering the later, more famous and celebrated 1314 victory at Bannockburn. *

It doesn’t have the emotional power wielded by Braveheart—Pine’s low-key Bruce impresses but doesn’t inspire, the pleasing soundtrack by Tony Doogan can’t summon the aching beauty of James Horner’s work for Gibson and the supporting cast is able but lacks the arresting vigor of the 1995 crew. Yet while those elements don’t match the earlier film, they hold enough weight on their own to maintain the narrative momentum, which is blessed throughout by Barry Ackroyd’s rich cinematography all over Scotland—Edinburgh, Isle of Sky, Stirling, Glascow, Glencoe—making use of numerous castles such as Tantallon, Blackness, Doune, Craigmillar, Borthwick, Dumfermline and Linlithgow. The battle sequences are superbly done.

* The real Robert the Bruce lived from 1274-1329, making it to the age of 55 (a big deal considering the time he lived in and what he did in it). But it seems you really can’t kill the guy: a year after Outlaw King comes 2019s Robert the Bruce, with Angus Macfadyen, now 50, replaying the character (he was 31 in Braveheart).