A PRIVATE WAR —–“I see it, so you don’t have to” is how legendary war correspondent Marie Colvin frames her raison d’être of repeatedly putting herself directly into harm’s way, covering conflicts around the globe, earning the admiration of her hard-to-impress peers, and doing what she could to inform the reading public—those who cared anyway–of the tragic truth behind the bloodless headlines.

Directed by Matthew Heineman (acclaimed maker of documentaries in his first go helming a feature film), written by Arash Amel, with a mash-up of 35 various-capacity producers (including Charlize Theron), the 2018 drama stars Rosamund Pike, fully de-glammed from her beauteous look to physically approximate the war-battered heroine. She goes fangs bared into inhabiting the manner and tone of Colvin, who bore a psychic toll from all she’d witnessed, and was inexorably drawn to. Along with critical praise, her performance reaped high marks from her cameraman Paul Conroy (played by Jamie Dornan), who knew her as well as anyone.

Of great benefit was the selection of Robert Richardson as cinematographer, shooting on location in Jordan. The combat zone situations crackle with tension, and there’s some impressive art direction recreations of shell-ravaged city-scapes. Box-office was negligible, just $3,827,000 worldwide. 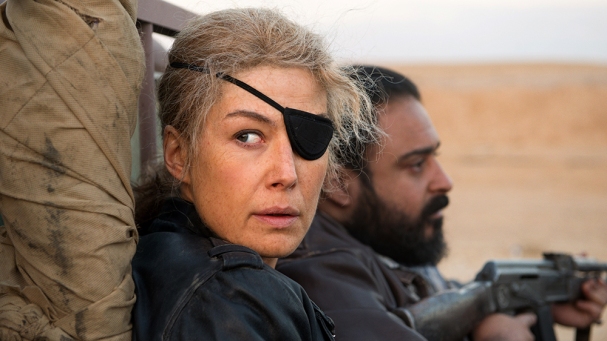