ROMAN J. ISRAEL, ESQ. brought Denzel Washington an 8th Oscar nomination for his strong portrayal of the title gentleman, whose archaic honorific ‘Esquire’ once described, per Webster, “a candidate for knighthood serving as shield bearer and attendant to a knight”. It’s also a courtesy title sometimes used by lawyers. A double-fit in this 2017 drama, as the brilliant but flawed defense attorney Israel is both a legal savant and someone who labored behind the scenes in his firm, preparing cases for the more people-skilled senior partner. When that man has a stroke, their tiny L.A. firm, specializing in Civil Rights cases, is revealed as insolvent. A flashy upscale practice handles the dissolution and reluctantly gives the irksome genius a tentative position. The toll of battling a corrupt system makes a fatal inroad to Roman’s stalwart ethics.

“The real enemies aren’t the ones on the outside, they’re on the inside.” 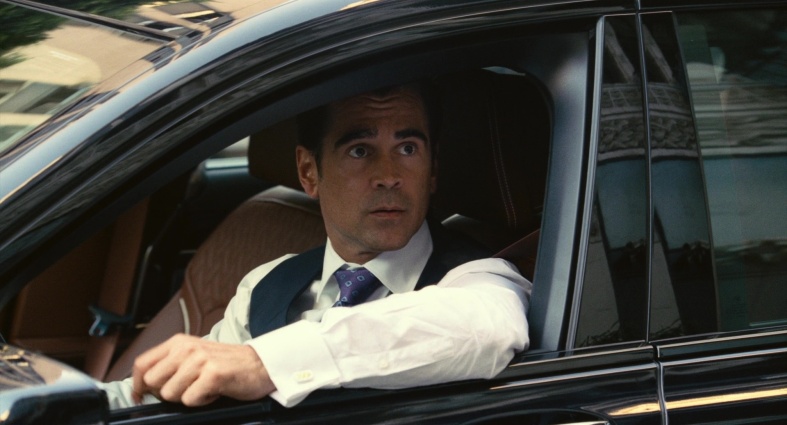 Written & directed by Dan Gilroy, its story may be a tad unwieldy, trying to cover too many bases—soulful character study, ethical challenge, legal thriller, blast at the thoroughly broken justice system—but the conversations have some juice, the production package is clean and fluid and the angry cry for some systemic-change has a passion quotient hard to resist.

“You know, all those years of practicing, scouring law books, achieving technical triumphs through loopholes and ambiguities, none of which were adequate to save me from the reality of my present situation….. I’m the defendant and the plaintiff simultaneously. I file against myself, I represent myself, I convict myself, hereby expanding the full scope of the legal desert, because the judgment’s built in. The only thing left is forgiveness and I grant that to myself.” 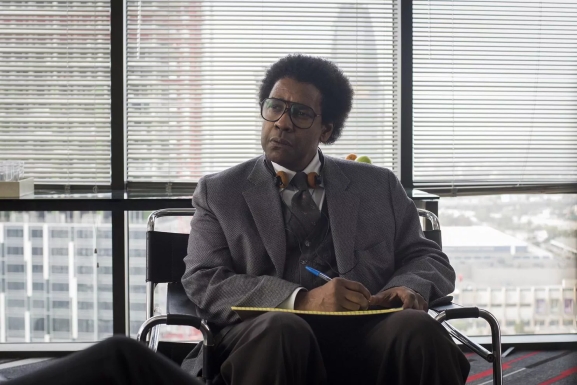 Washington’s makeover as the complex and vexing, valiant and sad protagonist is another home run to add to his recent deeply layered triumphs from Flight and Fences. As such, it’s more welcome reassurance that at 62, one of our best actors revealed a lot of premium-grade fuel left in the tank to ignite fire other than with fiddlesticks like 2 Guns, Safe House and the remake of The Magnificent Seven. Gilroy wrote him a great character (and for him especially) in Roman, a social-graces disaster, whose authentic fervor for activism and justice faces not only the maw of the corrupted system and a public grown to accept it but his interior handicapping of what’s apparently Asberger’s.

“The ability to have conflicting ideas in one’s head takes effort.” 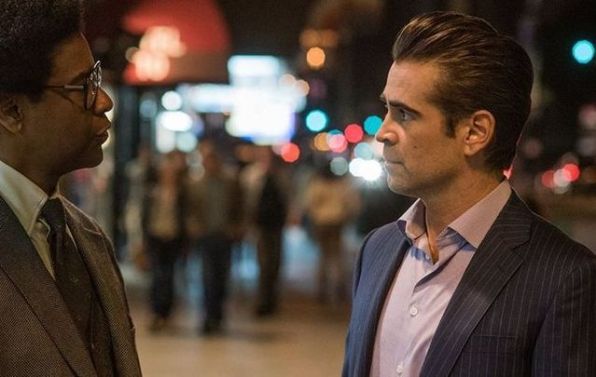 Backing Denzel is fine work from Colin Farrell as the success-driven hotshot whose tony office has absorbed Roman’s, and Carmen Ejogo as a modern grassroots activist who is impressed by Roman’s history of fighting for those without power. Farrell’s character is allowed more depth than one assumes going in and gets a pleasing arc, and Ejogo is beautifully persuasive conveying warmth and decency in danger of flagging under doubt that Hope and Change are nothing more than wishful.

“I’m tired of doing the impossible for the ungrateful.”

Washington was praised, the film itself less so, with some carping about holes in the veracity of the legalese end, deck-stacking and iffy chronology. The earnest $22,000,000 case was an unfortunate defeat at the box office, making just $11,963,000. 122 minutes. *

* “Well, I’m sorry for taking a nanosecond off of your assembly-line, rubber stamp existence.”  This movie, one offering ideas rather than explosions, joined a number of smart pictures that were lost among 2017s furious flotsam of CGI child’s play: Personal Shopper, The Founder, The Lost City Of Z, Last Flag Flying, The Death Of Stalin, Gold.