THE GUNS OF NAVARONE was the 3rd most successful movie released in 1961 (after 101 Dalmations and West Side Story), and, with a few dings, has maintained a positive rep over the years, a nostalgic favorite for those who saw it new on the big screen. Six at the time, had I seen it back then (“Pleeze, Dad, can we go, huh?”), I would have flipped over the Cool Factor of this WW2 adventure. Caught up with it as a teenager, when it made it to TV (not the way to see an epic), and have watched it numerous times since. Even with a hefty 158-minute running time, it moves its far-fetched derring-do along at a clip: the star-powered cast, ample action, exotic locations and exciting music score working to bat away pesky realism and keeping the nonsense tense. *

1943: in a cliffside fortress on a Greek island in the Aegean, the Nazis have two giant radar-controlled cannons, poised to obliterate British ships trying to rescue a trapped garrison on a nearby island. The display of Axis might could goad neutral Turkey into joining Hitler and Mussolini.  A select team of commandos go in by boat to rendezvous with resistance fighters and take out those monster guns. 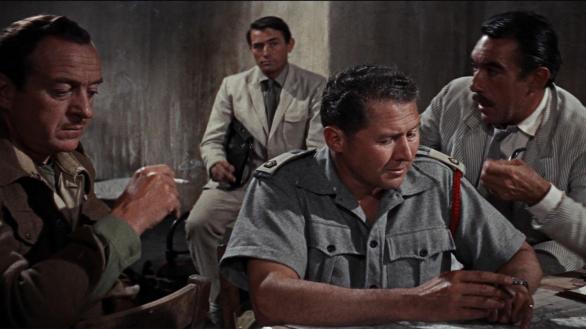 Taking the lead from the 1957 smash The Bridge On The River Kwai, Carl Foreman, who had helped write that classic, took Alistair MacLean’s same-year bestseller and shuffled it about to suit marketability savvy and to echo his own anti-war sensibilities. He then produced, with Colombia investing $7,000,000 (at that time, more than they ever had) to bankroll months of location shooting in the Aegean, mainly on Rhodes, and at the Shepperton Studios in England, and to enlist box-office security in the casting.

Mountaineer and spy Gregory Peck takes command when team leader Anthony Quayle is injured, carping Corporal David Niven is the demolition man, Anthony Quinn the Greek liaison who has a grudge against Peck, Stanley Baker a brooding knife expert and James Darren a Greek-American over-anxious to kill. Irene Papas and Gia Scala are the terse guerrilla gals they meet between violent escapades and hair-breadth escapes with the Germans. 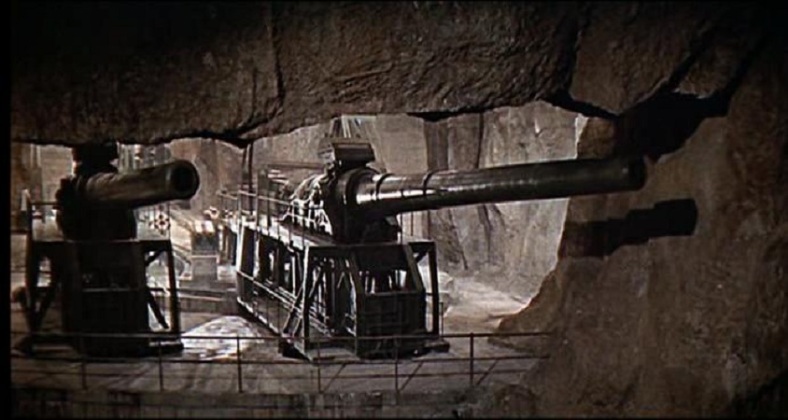 The story is a corker, with time-of-essence drama built in. The cast handle it with sturdy aplomb (and the right sly bit of tongue-in-cheek), the production values are impressive.  As director, Alexander Mackendrick (Sweet Smell Of Success, A High Wind in Jamaica) did not jive with the actors or producer, so a last-minute replacement, J.Lee Thompson (Tiger Bay, Flame Over India) showed up, nervous but game for his first Hollywood blockbuster. He steered the daunting project with a seat-of-the-pants finesse that made for his biggest career triumph.

You’re best off to jettison hopes for substantive real-world validity in this pip, as the action is cinematically exhilarating but patently absurd and Foreman’s grandstanding insubordinate speeches from Niven about Futility are energetic fun for actor-applause value but utter dross as viable spleen; they’d land the speaker either a prison sentence or field-issued bullet in the head. Hey, it’s a movie…

Even without the star names on the marquee, it’s likely people would have been lured in by MacLean’s action-sexy title alone; it’s become part of cultural lexicon. ‘Navarone’ is a fictional place, but with the seductive rollout of that sound it may as well be real. Befitting the stand-at-attention title, the movie announces itself in a grand main theme, booming with composer Dimitri Tiomkin’s signature boldness at scoring for stories rooted in heroic endeavor.

While critics duly noted that, as for fetching, this went pretty far, they agreed it was a slick and spectacular entertainment. When the Oscars rolled around it was nominated for Best Picture, Director, Screenplay, Music Score, Film Editing and Sound. West Side Story danced away with most the glory that year, but this was token awarded the trophy for Special Effects. Another adventure thriller from Colombia better earned that statue, but in one of the Academy’s classic glaring snubs it didn’t even get a nomination: Mysterious Island.  More than Imagination,War is Big Business.

Cogerson lists the film as #3 for the year, and gives it a gross of $37,100,000. Other sites deem it the year’s biggest hit, which may have been the case, as 101 Dalmations total includes four re-releases and West Side Story had several as well.

* In his typically astute review at CineSavant, Glenn Erickson makes the convincing case for this film as launch pad for the modern action epic, blasting open the international exploit doors for Bond and countless outsized manly missions. In terms of the War Genre, just the European theater of WW2 alone produced The Secret Invasion, The Heroes Of Telemark, Operation Crossbow, The Dirty Dozen and Where Eagles Dare, to name a few. Nearly all of the war movies made before ‘Navarone‘ took things in a more sober fashion (though not exactly heavy on realism or accuracy). Still, the “I-don’t-think-that-could-happen” champ may be 1942s Desperate Journey, with Errol Flynn and Ronald Reagan merrily mopping up half the Wehrmacht (statistics indicate a few apparently made it to Russia).

**  Fun Art meets Real Life Peril Dept: David Niven left Hollywood and a burgeoning career in 1939 to return to Britain and sign up. He served as a commando, with a number of scarring experiences, emerging as Lieutenant Colonel.  J. Lee Thompson put in duty for the RAF as a tail gunner.  Anthony Quayle saw action as a liaison officer for partisan units in Albania.  A quote from Maj. Quayle: “If life doesn’t have that little bit of danger, you’d better create it. If life hands you that danger, accept it gratefully.”