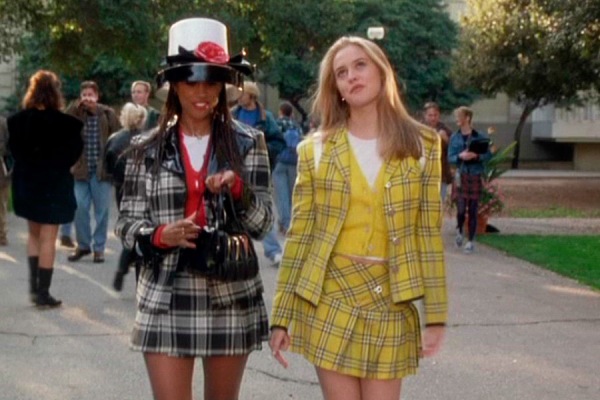 CLUELESS —–endlessly funny, quotable from “As if ” to “way harsh“, this sleeper comedy on the dis-brained youth of the day became a hit on release in 1995 (‘Like, has it been, like, that far from, like, already?’), a sturdy cult item, and a snarky/sweet/sad survey of how far below-low SATs could sink from the summer crusin’ of American Graffiti. ‘Or, like, even’ the bong-logic that was Dazed And Confused …. 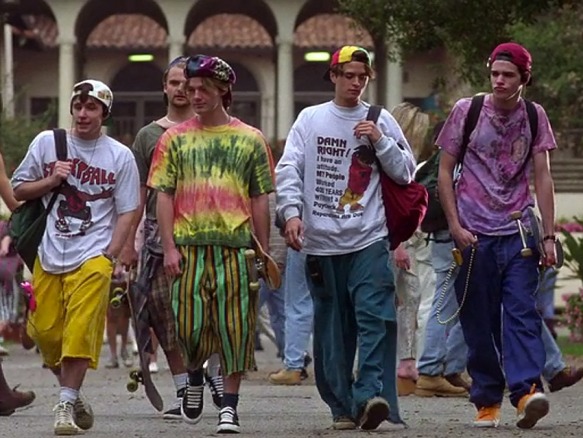 Written & directed by Amy Heckerling (Fast Times At Ridgemont High), who spun this high school coming-of-sage rave off Jane Austen’s “Emma” (minus the lousy weather), the 97-minute mock-down with dozens of laughs had— as with those mentioned above—the side effect of launching some bright shooting stars. *

Ruling the rich-kitty cattiness catwalk of their Beverly Hills high school, ‘Cher Horowitz’ (Alicia Silverstone) and girlfriend ‘Dionne Davenport’ (Stacey Dash) gleefully blow off the geek-cliques around them—even while taking precious time away from shopping— to plot a way to improve their report card grades, which tend to skip down the alphabet. Spoiled but not rotten, Cher has smarts, charms and soft spots beneath her artful apparel, and she does feel-good things that are actually nice, like hooking up lonely teachers (grade motive allowed) and making over newcomer and fashion-action moth ‘Tai Frasier’ (Brittany Murphy) into the new exotic butterfly of 6th-period.

“She could be a farmer in those clothes.”

Then, romance, jealousy, envy, identity, purpose and all that other bad stuff happens.   Will college’y step-brother ‘Josh’ (Paul Rudd), who actually reads books and thinks beyond The Mall, step in to help clarify conundrums confounding Cher? 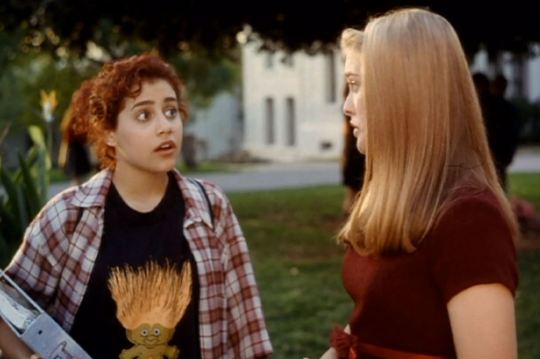 Heckerling’s cite & recite screenplay is witheringly accurate yet kind-hearted, a cheerful rather than mean twist of the teen troposphere. Bunny cute, stiletto sharp with her delivery, Silverstone is a case of perfect casting, and the rest of the team players tease wins, with special nods going to a giddy Murphy and to Twink Caplan, a winner as shy mouse ‘Miss Toby Geist’, who just needs to enroll the right history teacher.

“She’s my friend because we both know what it’s like to have people be jealous of us.”

“Ms. Stoeger, my plastic surgeon doesn’t want me doing any activity where balls fly at my nose.”

Enduring affection for the confection led to spin-off TV series that ran for three years, a book by Jen Chaney, “As If!: The Oral History Of Clueless”, and an off-Broadway play Clueless:The Musical.

“Until mankind is peaceful enough not to have violence on the news, there’s no point in taking it out of shows that need it for entertainment value.”

* “You’re a total Betty.” Alicia Silverstone was 18, and her career went up like a rocket, down like same (she’s still game).  Stacey Dash, 27 at the time, went on to personify the lack of a clue by becoming a right-wing mouthpiece ditz for Fox News, a contributor “for cultural analysis and commentary”. Brittany Murphy, 17 during filming, was destined for a good run, but that was tragically cut short by pneumonia at 32.  25-year-old Paul Rudd weathered the ups and downs of show-biz with greater success than his co-stars from this still-fresh pop classic. “Why should I listen to you, anyway? You’re a virgin who can’t drive.”