THE LADY FROM SHANGHAI —–“When I start out to make a fool of myself there’s very little can stop me.”  That line was probably tossed back at Orson Welles when Colombia Studios tyrant/boss Harry Cohn was reading him the riot act (with no doubt harsher language) when Harry could not digest what writer/producer/director/star Orson had delivered after nearly five months of location shooting. After mandated retakes, then extensive re-editing, the 87-minute finished product was not released for another 15 months, June of 1948. The $2,300,000 effort—a third of that thanks to Cohn’s tweaking, but blamed on Welles—only brought $2,000,000 back, limping into 135th place for the year. *

“What’s a tough guy?…A guy with an edge…A gun or a knife, a nightstick, or a razor, somethin’ the other guy ain’t got. Yeah, a little extra reach on a punch, a set of brass knuckles, a stripe on the sleeve, a badge that says cop on it, a rock in your hand, or a bankroll in your pocket. That’s an edge, brother. Without an edge, there ain’t no tough guy.”

In New York City’s Central Park, rowdy, romantic and footloose Irish sailor ‘Michael O’Hara’ (Welles) saves a mysterious knockout of a dame, ‘Elsa Bannister’ (Rita Hayworth) from an assault. Desire besting judgment, he signs on as crewman for her disabled and discontent husband, a rich defense attorney (Everett Sloane), who’s taking their yacht (the Circe) to San Francisco. Joining the tense trio, ultra-creepy ‘George Grisby’ (Glenn Anders) suggests to O’Hara a bizarre fake-murder plot. By the time things wind up, after a sultry stop in Acapulco, O’Hara finds himself several kinds of a fall-guy for this depraved clutch of characters.

“You’ve just been called a shark. If you were a good lawyer you’d take it as a compliment.”

Welles 155-minute rough cut was sliced & diced to suit Cohn, and the footage is lost, so it’s a guess as to what may have been, but what’s left is a stand-alone dazzle of the weird: part film noir, part thinly veiled personal relationship exorcism, a hallucinatory and twisted, confused and sinister mystery adventure with loopy humor, oddball acting, and inspired design. Welles bogus Irish accent isn’t going to fool anyone who’s ever actually heard one (granted, it’s not as dopey as the one he helped sink Ferry To Hong Kong with) , but Hayworth—her trademark red mane shorn and dyed blonde—is very good, Sloane is in fine fettle going malevolent and incoming brute Ted de Corsia, 44, is a snarling menace in his debut. Stealing the bile out from under them all is Glenn Anders, whose creation of the loathsome Grisby is one of the wildest villain performances this side of the White House. Mostly shot in repulsive and distorted giant closeups to reflect the irrational way he sees things, he sports a lascivious and voyeuristic leer worthy of clinical study, adding reedy vocal insinuations suited to the pervert ward of your nightmares. **

Though the editing renders an already labyrinthine plot nearly irrelevant, in the wake of the fun acting, killer production design and the overall audacious stylizing, it doesn’t hamper enjoyment. Famous for the elaborate shootout finale in the ‘Magic Mirror Maze’ (Stephen Goossn’s sets are invaluable), there’s also the wildly goofy courtroom scene and earlier on, an ingenious crane shot that was the longest yet attempted in Hollywood: Orson’s mightily laboring cameraman was ordered to keep Welles/Michael and Rita/Elsa in focus in & around settings and props for three-quarters of a mile. For the exteriors, cinematographer Charles Lawton, Jr. relied on natural lighting, rare at the time. 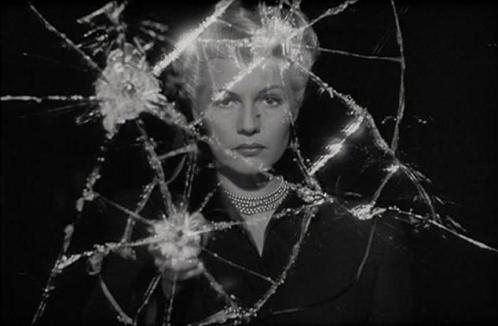 BANNISTER: “So, money doesn’t interest you. Are you independently wealthy?”
MICHAEL: “I’m independent.”
BANNISTER: “Of money? Before you start that novel Elsa says you’re going to write, you’d better learn something. You’ve been travelling around the world too much to find out anything about it . . .”
MICHAEL: “I’ve always found it very sanitary to be broke.”
BANNISTER: . . . “Money cannot bring you health and happiness, etc. Is that it? Without money, I’d be flat on my back in the ward of a county hospital . . . Each man has his own idea of happiness, of course, but money is what all of us have in common . . . You call yourself independent. Come around and see me five years from now.” 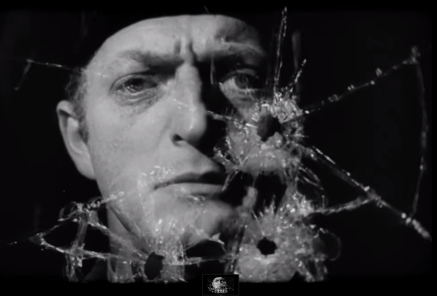 Sherwood King’s 1938 pulp novel “If I Die Before I Wake” was adapted by Welles, who then produced and directed, shooting on location in Mexico (Acapulco and Pie de la Cuesta) and California (Sausalito and San Francisco).

It’s the kind of fascinating, messed-over production that attracts interpretation, gossip, blame and trivia. Legend has it Cohn offered to pay a thousand dollars to anyone in the viewing room who could explain the plot.  Anthony Mann was an assistant director, and Rudolph Maté stepped in on camera when Lawton fell ill on location. With Erskine Sanford, Gus Schilling and Carl Frank.

“Killing you is killing myself. But, you know, I’m pretty tired of both of us.”

* Critics and fans who fancy, fawn and fight over certain artists could do well acknowledge that sometimes their beloved auteurs, brilliant and innovative rule-breakers, can also be sloppy and self-indulgent tyros heedless of other people’s time and money. This was an unhappy shoot marred by dysentery (Hayworth was sick for a month), the heart attack death in the broiling Mexican heat of an assistant cameraman, plaguing insects, and a pain-ridden backstory of the disintegrating Welles-Hayworth marriage. Industry wagging has at least part of the script not just reflecting their woes, but a veiled gutpunch to Colombia ogre Harry Cohn, who felt he’d made—in every sense–Rita Hayworth. Cohn had editor Viola Lawrence cut 69 minutes, including Welles original fun-house finish, which ran 20 minutes; the edited cut lasts three.  Lawrence edited eight other Hayworth pictures, including Only Angels Have Wings; Hollywood’s first female editor with 100 credits between 1917 and 1960, so she was no slouch, but her rep (with critics, so who really cares?) has been marred by what happened to this picture.  Apart from the axe taken to the running time and clarity, when it was finally released Cohn dumped it on the bottom half of double-feature bills; surely a vindictive smack at Welles. The film’s on-screen credits do not show one for Director–was that another Cohn backhand?  Finally fed-up with the studio system and its overlords, Orson went to Europe. 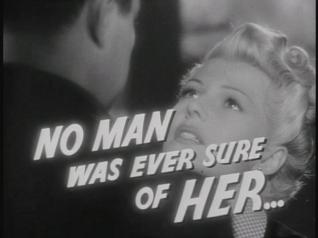 The yacht–-Circe––was actually Errol Flynn’s sweetheart escape pod, the Zaca. Flynn leased it to the studio for the shoot, but then held things up by vanishing with it for stretches. When the assistant cameraman died, a soused Errol tried to put him into a duffel bag: Welles rushed someone ashore to alert authorities before Flynn could bury the man at sea. In Greek mythology, Circe was a bewitching enchantress who, among her other talents, transformed heroes into swine.

Along with all the other jabber that feeds the legend of this movie, is the self-serving whopper Welles told about how he’d found the property, an alleged spur-of-the-moment grab. Actually, William Castle found and bought the property and had Welles pitch it. Castle then worked on the film,uncredited, as associate producer and 2nd-unit director. He also had a hand in the script, along with the veteran Charles Lederer and a fellow named Fletcher Markle. They received no credit. Welles took it. Castle later became famous for schlock horror movies with advertising gimmicks. The Welles story about finding “If I Die Before I Wake” is nonetheless repeated, unchallenged, in review after review.

** A well-regarded theater actor, Glenn Anders only appeared in 8 movies between 1925 and 1951 (among them Tarzan’s Peril, a good reason to rewatch that silly Lex Barker item). Anders lived to be 92, passing away in 1981. 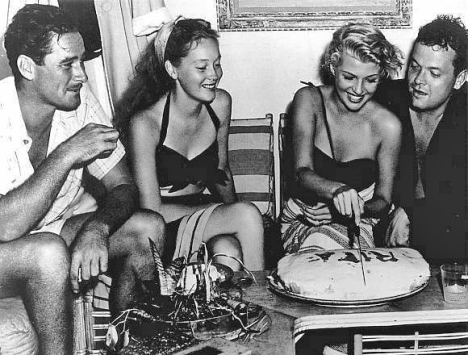