FITZCARRALDO, a unique saga of obsession run riot, unfolds over 157 minutes that properly fit its subject like a long, dreamy trip down a mysterious river: slow and strange, stunning and intoxicating. Add deluded, dangerous and crazy.

“Ladies and gentlemen, don’t worry. This gentleman is harmless. He’s just had a, a soul-stirring experience.” 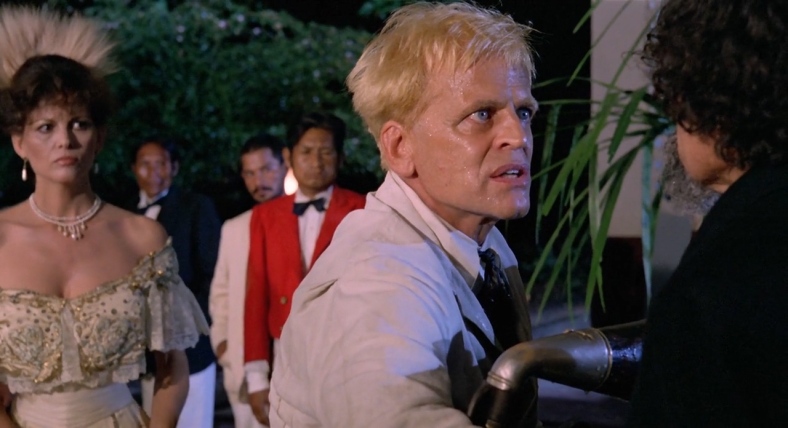 In the 1890s, an ambitious Peruvian rubber baron, Carlos Fermín Fitzcarrald, made a name for himself with his daring escapades. These included brutal use of regional natives to transport a steamship across an isthmus separating two rivers. Not interested in the cruel latex bonanza or the unlikable man, but intrigued by his strange feat and the exotic locale, another ambitious and daring fellow, writer-director Werner Herzog, undertook an epic interpretation of the story. Herzog’s costly journey into hallucinatory vision careened into harsh jungle reality, exacting years of controversial production peril before it was released in 1982. *

Playing ‘Brian Fitzgerald’ is five-time Herzog collaborator, friend/enemy/fellow lunatic Klaus Kinski. Bug-eyed with fearless enthusiasm, wild blond hair sticking up in disarray, the Werner/Klaus fever dream creation of Fitzgerald/Fitzcarraldo is an opera lover so enraptured by the music that he makes a vow to build an opera house in Iquitos, Peru, the ultimate backwater settlement, 2,200 miles up the Amazon. Funding will come from finding and selling rubber. That will require a boat, which his brothel madam paramour ‘Molly’ (Claudia Cardinale) helps finance. After the Caruso-smitten zealot and his sketchy crew encounter hostile Indians, the task is to get the tribe’s cooperation in hauling their vessel over a steep hill separating two treacherous tributaries of the Amazon. A mission within a quest inside a vision. The logistical and physical effort to put the dream on screen became an emotional and ethical nightmare for cast and crew. **

It takes a good while to get started, and the absurdist ending is a let-down, but in the main it’s compellingly weird and arrestingly beautiful, mesmerizing for both the prehistoric natural backdrops and the sheer mad human audacity on display. A deranged Kinski is in his element, the use of ambient sound is key (the silences are deafening), Thomas Mauch’s cinematography is rich, and, apart from some passages of opera, there’s a discreet soundtrack by the German electronic avant-garde band Popul Vuh. The astonishing—or just insane—centerpiece is Fitzcarraldo/Herzog employing hundreds of Aguaruna Indians to manhandle the SS Molly Aida over a mud-sucking 40° incline from the Pachitea River to neighboring Ucayali. The real-life Fitzcarrald had a 30-ton craft that was dissembled for the portage. The music-motivated movie character and his messianic director go full-on bananas with a 3-story, 340-ton vessel hauled in one massive piece. Apart from a few quick shots of a model, everything you see is the real, massive deal. 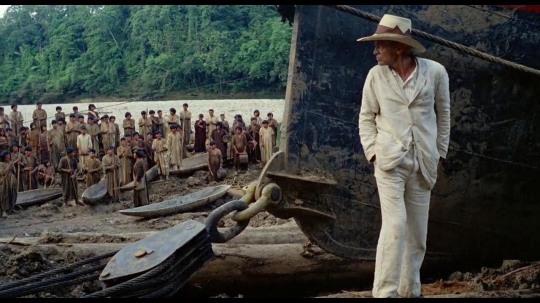 Shot on the Amazon at Manaus, Brazil and Iquitos,Peru and on the Pongo de Mainique section of the Urubamba River, also in Peru.

* The Amazon Rubber Boom swept through Brazil, Bolivia and Peru from 1879 to 1912, creating many fortunes, making isolated river cities flourish and wreaking untold misery on indigenous tribes forced to harvest the latex from the jungle. Countless thousands perished in probably the worst sustained atrocities in the Americas since the Spanish Conquest. The real Fitzcarrald marshaled an army of 5,000 to aid in his ruthless pursuit of fortune: the nervy bastard drowned at 35 when his ship sank in the Madre de Dios.

** “A successful disaster” would be one way to describe the experience of making this bizarre adventure. Highly recommended to watch, preferably after its subject, is Burden Of Dreams, the 1982 documentary shot by Les Blank during the making of the film. Blank put it “I knew if I could make it back in one piece I’d have some great material, but in some ways I’m amazed I came out of it alive.” Jason Robards was originally cast, but dysentery felled him after nearly 40% of footage was completed: this had to be scrapped. Mick Jagger was on board but could not continually delay concert tours and so he left. Two airplane crashes left a number of people injured, one of them paralyzed. Many were stricken by malaria. Bitten by a venomous snake, one guy actually chainsawed off his foot to save himself from the poison.  Amahuaca tribespeople staged a hit-and-run attack, riddling one man and his wife with arrows. Hundreds of Indian extras were relocated to work as extras, but were then used as laborers for the boat-drag sequences. Outraged Aguarana tribals burned down a set. Kinski was so maniacally off-his-nut that one native chief offered to murder him for Herzog. Whether all this pain was worth it for “art” is debatable.  Let’s give Herr Werner the last word: “I am a Conquistador of the Useless.” 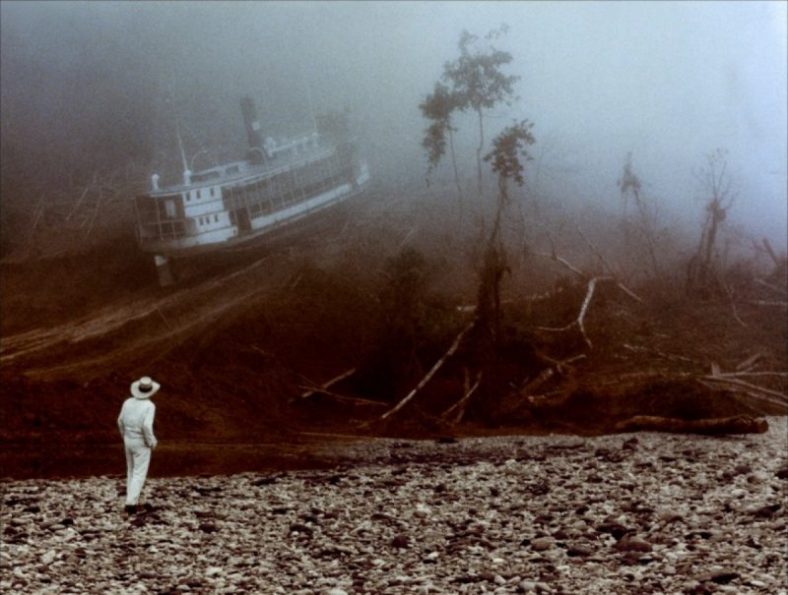