MUTINY ON THE BOUNTY occurred in real life near the Tongan island of Tofua, on the 28th of April, 1789, when a group of homesick, lovesick and fed-up sailors led by 22-year-old Fletcher Christian took charge of a British cutter returning from the South Seas under command of William Bligh. The rebels sailed back to Tahiti, those loyal to Bligh underwent an amazing voyage of 3,500 miles in a lifeboat. Later, the luckless mutineers who were caught were tried back in England, while a handful made it to isolated Pitcairn Island. History beckoned Legend. Legend begat a trilogy of novels by Charles Nordhoff and James Norman Hall (“Mutiny On The Bounty” in 1932, “Men Against The Sea” a year later and “Pitcairn’s Island” in ’34). A now-lost Australian silent film of the story was made in 1916 and then a creaky early sound effort, again from Oz, came in ’33, called In The Wake Of The Bounty, starring a young and untrained rascal in his debut, Errol Flynn. Two years later the first big-scale Hollywood treatment arrived in the form of this 1935 epic, which stirred up a wake as the biggest boxoffice success of the year, drew critical raves, and won the Best Picture Oscar.  Over the decades it has maintained an iconic status sturdy enough to fit the Royal Navy.

“The ship’s company will remember that I am your captain, your judge and your jury. You do your duty, and we may get along. Whatever happens, you’ll do your duty.”

We can’t speak to the early talkie with young Flynn (it’s apparently a snooze), but will risk a flogging by going counter to the long-held prevailing wisdom that this version is the best of the rest. It’s a salty rouser, to be sure, but for my share of grog it is bettered by the later versions from 1962 (unfairly maligned) and 1984 (ignored).

Directed by Frank Lloyd, the screenplay was written by talents Talbot Jennings, Jules Furthman and Carey Wilson, who had to pare 1,024 pages of the Nordhoff-Hall trilogy into 132 fast-moving minutes of screen time. MGM legend Irving Thalberg produced, lavishing $1,900,000, much of which went into life-size replications of the Bounty and Pandora.  Sailed the 4,000 miles from California to Tahiti, surviving torrential seas, both were damaged. A camera barge capsized, taking with it $50,000 in vital equipment. Much worse, trying to save the gear, assistant cameraman Glenn Strong drowned. The hard-won 2nd-unit location shots from Polynesia were then matched with the bulk of the work, done mostly on Santa Catalina, off southern California. *

Charles Laughton is Bligh, Clark Gable is Christian, and Franchot Tone plays the fictional ‘Roger Byam’, who serves as a sort of conscience counterbalance between the cruel commander and his rebellious master’s mate. All three deliver strong work. This was a big year for Laughton, winning acclaim for his dogged ‘Inspector ‘Javert’ in Les Misérables and his comic valet in Ruggles Of Red Gap. His vivid interpretation of Bligh made a huge impact at the time and has endured as one of the immortal villain roles, giving ammo to impressionists for years. It’s full-throttle, and entertaining, but there’s not a rum thimble of nuance to the pouty, barking nastiness: he’s arresting and amusing but not believable. The hurry-up-and-hurt writing doesn’t help. Thanks to the novels and Laughton’s famous go, the real Bligh was left behind. The dramatic license—or slander–continued in the next version with Trevor Howard, then was finally allowed some human latitude with Anthony Hopkins in the ’84 telling. Gable—virile, charming and decisive—is quite good, and Tone’s early career score as the sensitive, spirited and thoughtful Byam was his high water mark. Neither attempt a Brit accent, but it doesn’t harm the fireworks any.

“I’ll live to see you—all of you—hanging from the highest yardarm in the British fleet!”

The screenplay, granted taken from the novel rather than evidence, plays fudge with historical accuracy, heaping on Bligh’s abuse to just too great a degree, and rushing the final segments. It also skips the Bounty‘s stops in South Africa’s Cape of Good Hope and in Tasmania on their way to Tahiti: they covered 27,086 nautical miles (31,170 land miles or 50,173 kilometers) before dropping anchor in the paradise that sealed their fates.

Grossing $11,351,454 worldwide, along with the Academy Award win for Best Picture,  nominations went for Best Actor (Laughton, Gable and Tone), Direction, Screenplay, Music Score and Film Editing. The trifecta actor nod, with Tone’s being really a secondary part, resulted in the creation of the category for supporting roles. 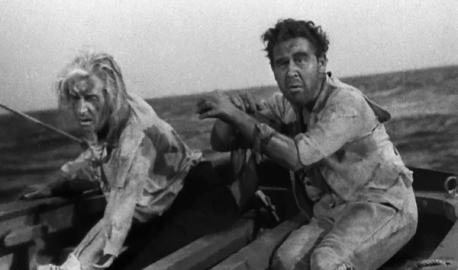 * Laughton was 35, Bligh 33.  At 34, Gable was twelve years older than Christian. Most of the crew of the Bounty were under 30. As for sensuous Tahiti, Bligh noted “the allurements of dissipation are beyond any thing that can be conceived”. Following suit, 18 of the 46 men aboard contracted VD during the 6-month stay, a layover in every sense.

1935 was a banner year for Historical Adventure: Lives Of A Bengal Lancer, China Seas (Gable), The Crusades, Les Miserables (Laughton), Captain Blood (Flynn in his international debut), A Tale Of Two Cities, The Call Of The Wild (Clark again), Annie Oakley, The Last Outpost, Barbary Coast and The Last Days Of Pompeii. 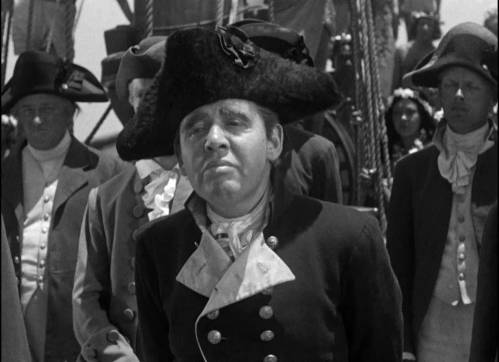 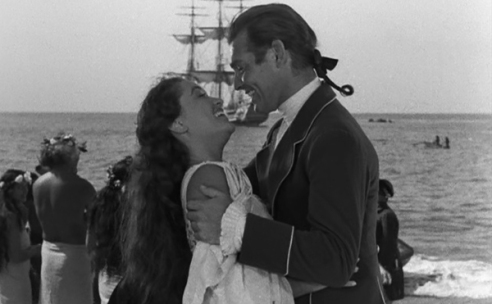