THE AWFUL TRUTH is awfully funny, one of the best of the classic screwball comedies that made the Depression a tad easier to bear and have lived on to delight generations descended from those crowds that found them so timely and tickling during the FDR era.

“And if you get bored in Oklahoma City, you can always go over to Tulsa for the weekend!”

Manhattan reels as the Warriner marriage is on the rocks. ‘Lucy’ (Irene Dunne) discovers ‘Jerry’ (Cary Grant) has been fibbing about his supposed “business trip” to Florida, and he has found her keeping suspicious company with her too-handsome, too-suave music teacher. While divorce is pending, Lucy is courted by their folksy neighbor, Oklahoma oil man ‘Dan Leeson’ (Ralph Bellamy), who lives with his “Maw”.  Meantime, Jerry gets involved with a snooty heiress.  As the warring Warriner’s are still in love—but refusing to show it—they each work to sabotage the other’s new arrangements. Plus, giving up the swank apartment is one thing, but the judge awarded Judy custody of their Wire Fox Terrier, and… that just won’t do… 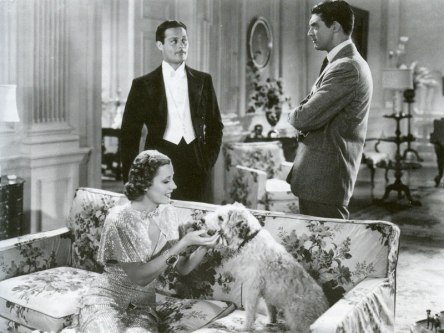 A loose but smooth directorial manner, favoring improvisation, and his well-honed gift for gags saw Leo McCarey steer a reluctant Grant into the comic persona that would make and define his career.  At the same time he nurtured ladylike and refined Irene Dunne free rein to bloom an aptitude for subtle and winning whimsy. Grant’s physical shtick is a kick; a game and disarming Dunne picked up the third of her five Oscar nominations. 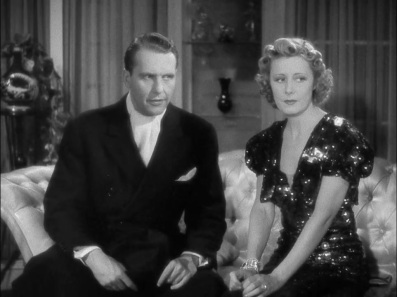 Three great supporting performances put cherries on the icing. Bellamy beautifully aces across a naive but kindly doof, having keen fun with his Midwest ‘rube’ but not stooping to condescension. Pre-dating second-banana dames like Eve Arden and Thelma Ritter, Cecil Cunningham gets a slate of iron-dry one-liners as ‘Aunt Patsy’. For the French- cheese piano Lothario ‘Armand Duvalle’, wonderfully smarmy Alexander D’Arcy keys every note with a polish pleading for puncture. 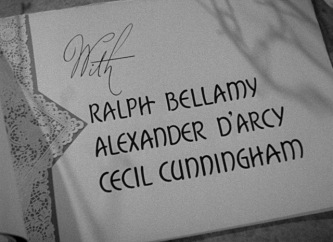 * Dunne & Grant hit it off and later teamed for My Favorite Wife and Penny Serenade.  She recalled “I appeared with many leading men. But working with Cary Grant was different from working with other actors – he was much more fun! I think we were a successful team because we enjoyed working together tremendously, and that pleasure must have shown through onto the screen. I will always remember two compliments he made me. He said I had perfect timing in comedy and that I was the sweetest-smelling actress he ever worked with.”  She said “I marveled at the excellence of his timing—the naturalness, the ease, the charm.” After this movie, his salary went up by 50%.

Cary felt “Her timing was marvelous. She was so good that she made comedy look easy. If she’d made it look as difficult as it really is, she would have won her Oscar.”

Some swell humor exercises blew away the blues in 1938—Topper, The Perfect Specimen, Saratoga, Nothing Sacred, Way Out West, A Day At The Races, and Easy Living—but they all finally had to face The Awful Truth.

3 thoughts on “The Awful Truth”