THE TALK OF THE TOWN —–“He’s the only honest man I’ve come across in this town in 20 years. Naturally, they want to hang him.”  Directed by George Stevens, this good-looking 1942 comedy-drama wasn’t all that big with the public, ranking 86th place for the year, though it pulled down Oscar respect with nominations for Best Picture, Screenplay, Story, Cinematography, Music Score, Art Direction and Film Editing. From this corner, I’d only agree with putting it up for Ted Tetzlaff’s sleek camerawork; despite the pedigree of director, cast and writing team, this confection, mixing social justice observation and civil liberties arguments with slapstick just doesn’t bowl me over. To each their own.

“What is the law? It’s a gun pointed at somebody’s head. All depends upon which end of the gun you stand, whether the law is just or not.” 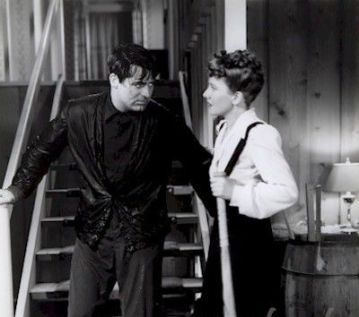 Falsely blamed for deadly factory arson, amateur agitator ‘Leopold Dilg’ (Cary Grant) escapes jail and hides out in the house of his former schoolmate—and longtime crush—‘Nora Shelley’ (Jean Arthur), who is renting the place to a cultured law professor ‘Michael Lightcap’ (Ronald Colman), who is unaware of the deception Dilg and Shelley run on him while they angle for a way to prove Dilg’s innocence. Differing in background, style and temperament but keen to bat around ideas and debate justice, the men form a friendship.  Shelley finds herself drawn to both, and they to her. What happens when the jig is up?

Written by Irwin Shaw, Dale Van Every and Sidney Buchman, from a story by Sidney Harmon, there are good lines scattered around and taking a decidedly liberal tack in the serious underlay to the joking is commendable. But it goes on too long at 118 minutes; around the 90-minute mark Arthur squeaks “When will this ever end?” and I kneejerk found myself looking at the clock and groaned seeing there was another half-hour to go. The way-too-busy music score from Friedrich Hollaender commandeers too many scenes. 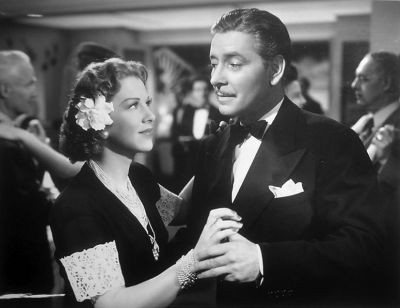 Much as we like Cary, he’s not remotely believable as the working stiff fugitive, comedy or no, and even though I can acknowledge Arthur as a good actress, I can never fully warm up to her–it’s an aural-aesthetic thing, that squeaky voice stuff leaves me wincing. Colman on the other hand is always a pleasure, with his ultra-elegant but warm and reassuring intonations. Leonid Kinskey has a quick bit of physical shtick that’s fun and Glenda Farrell scores as a sketchy dame in on the frame-up of Dilg. “I’m in mourning. Its a great hardship because I’m the type of girl who loves to get around…Gee, I wish he wasn’t dead, at least for one night. I sure would like to go dancing tonight.”

Budgeted at $1,000,000, the property went through a dozen different titles before settling on one that fit. With Edgar Buchanan, Charles Dingle, Rex Ingram, Tom Tyler, Don Beddoe and Lloyd Bridges.

* Dale Van Every wrote 20 novels and historical works, as well as screenplays such as Murders In The Rue Morgue and Captains Courageous.  Irwin Shaw would become famous for his best-sellers The Young Lions and Rich Man, Poor Man but he first had to endure blacklisting. Sidney Buchman was also ousted by the Red-baiters: he wrote Mr. Smith Goes To Washington, Holiday and down the road the 1963 version of Cleopatra.