DECISION AT SUNDOWN —–“Looks like you’re doin’ your job real good, so don’t spoil it with some of your philosophizing.”   The third Randolph Scott western for director Budd Boetticher, this set-bound 1957 entry runs 77 minutes, and instead of Burt Kennedy on screenplay, that chore was taken by Charles Lang. He also did the next Randy-Budd flick, Buchanan Rides Alone, which was about as exciting as this one, as in “not very.”

Scott’s character is a little darker this time, bent as he is on revenge over the suicide of his wife, something brought about by her affair with a scurrilous town boss named ‘Tate Kimbrough’ (John Carroll, a good job). Randy and his jovial partner (Noah Beery,Jr.) hole up in the livery stable while Sundown’s collection of weaklings wait out the eventual showdown. The main damsel is played by Karen Steele, 26, whose pinup figure is vacuumed into the tightest-fitting garment the director could rustle up. * 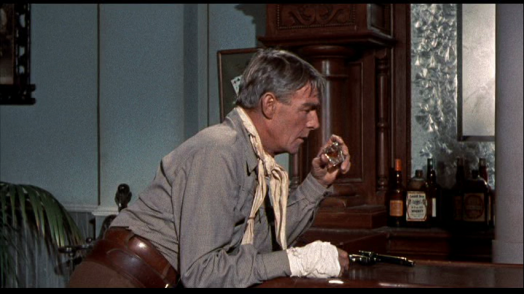 Talky, with little action, it looks more like an elaborate TV show than a movie. Familiar faces strew the supporting cast of cowed townsfolk: John Archer, Valerie French, Andrew Duggan, James Westerfield, John Litel, Ray Teal, Vaughan Taylor, Richard Deacon, H.M. Wynant, Bob Steele and Abel Fernandez. This trailed the herd at 100th place with a gross of $2,600,000, not a grand showing but more than enough to cover costs and guarantee another Randolph romp coming down the pike.

* Boetticher, his marriage tottering, melted for Steele. In his autobiography—with the great title When in Disgrace— he wrote, “Decision at Sundown was the only Scott picture I have honestly considered – well – ‘so-so.’ …Charlie Lang, did the best he could with the story Columbia had bought….although we had a wonderful cast…for me it was just another picture. But Karen was sensational! She looked like a million dollars; played the secondary part to perfection, and I really had her costumed to show off that unbelievable figure.”  The rocky Budd-Karen saga ran for three years and two more pictures. He reflected: “I guess it takes a young director a good while before he begins to understand that the girl he sees every evening up there on the screen is his version of what he wants from a woman. She’s not for real. There you are, holding hands in the dark projection room with your leading lady, and simply adoring that gal in the film. Of course you are. You put her there! Everything she is doing up there is what you like… Well, brothers, grow up…. I ended up getting exactly what was coming to me – a bellyful of misery, absolutely ill about my family, and thoroughly disgusted and angry at my own stupidity. A motion picture director should only become involved with an actress in spite of her profession, not because of it.”  All of which is more engaging than Decision at Sundown.

One thought on “Decision At Sundown”