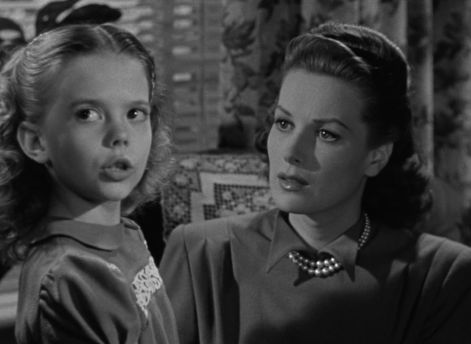 MIRACLE ON 34th STREET holds its sweet-tart charm intact over seven decades since it was a success in the summer of 1947 (Darryl F. Zanuck wisely choosing to release it then rather than at Christmas). The modestly budgeted ($630,000) comedy-fantasy with a values message grossed $7,200,000, 36th place for the year and was nominated for Best Picture. It won three Oscars: for 69-year-old Edmund Gwenn (I mean, Kris Kringle) as Supporting Actor, for Screenplay, written by its director, George Seaton, and for the Story, from the aptly named Valentine Davies. * 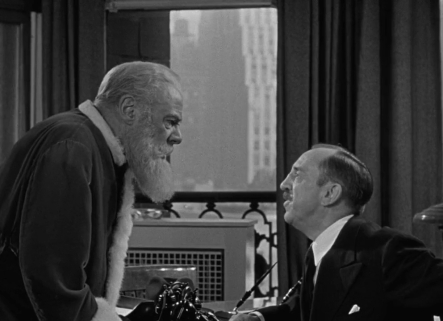 “Yeah, there’s a lot of bad ‘isms’ floatin’ around this world, but one of the worst is commercialism. Make a buck, make a buck.”  Whether Seaton or Davies wrote that, it bids fair to be as true (now more than ever) as any system-situation-summation you could divine.

In the hectic space between T-Day and C-Day, a capable but cynical divorcee, events director for Macy’s (Maureen O’Hara, 26), is schooled in the virtues of wonder, faith and imagination by a jolly bearded fellow (Gwenn), hired to play Santa Claus, who insists he really is a natural for the part. Her smitten neighbor (John Payne), an upcoming lawyer, ends up defending said Santa’s sanity in court. O’Hara’s smart but fantasy-deprived daughter (Natalie Wood) is coaxed into accepting Mr. Kringle’s philosophies, and gets Big-Time delivery on her wished list dreaming and believing. 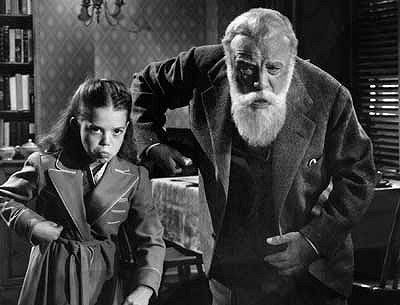 O’Hara and Payne mesh. They’d happily worked together in To The Shores Of Tripoli and Sentimental Journey, both successes. He’d originally purchased the property as a vehicle for himself and considered this picture his personal favorite. He long hoped to make a sequel and later wrote a screenplay for it. If the Seaton script has a weakness it’s in not fleshing out their romance as well as could be. Otherwise, Seaton’s handling of Valentine’s story warmly manages satire and sweetness (without getting gooey), and you’d have to be one Grade-A grump to not respond to Gwenn’s calm sincerity and unforced twinkle and 8-year-old Natalie’s preternatural ease and adorable manner—what a total charmer. 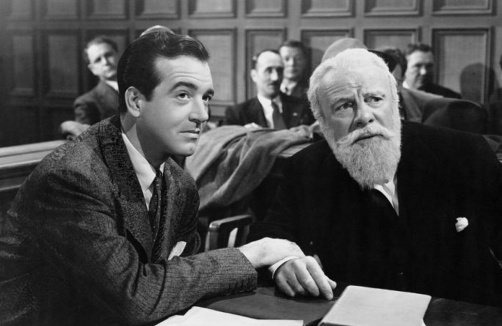 In 75 movies between 1931 and 1954, character actor Porter Hall deftly etched assorted corrupt, pompous or otherwise nasty types–here he’s the weaselly pseudo-shrink who railroads K.Kringle into Bellevue. Not to worry, as lawyer Payne seals the eventual courtroom sequence with the irrefutable logic of “Your Honor, every one of these letters is addressed to Santa Claus. The Post Office has delivered them. Therefore the Post Office Department, a branch of the Federal Government, recognizes this man Kris Kringle to be the one and only Santa Claus.”

Along with deftly conveying its ditch-greed and embrace holiday spirit message, the movie worked talisman duty as a plug for both Macy’s and Gimbels and brought the localized event of the Thanksgiving Day Parade to national attention. Harry Antrim did such a convincing job playing Mr. Macy that many people assumed he was the actual guy: in fact R.H. Macy had gone on to the Big Sale back in 1877. 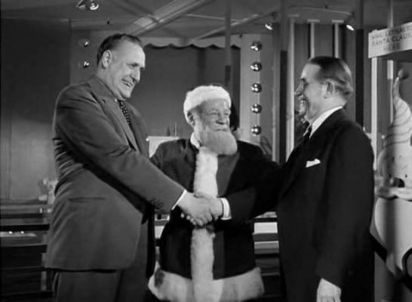 * “But… but maybe he’s only a little crazy like painters or composers or… or some of those men in Washington.”  Gwenn, accepting his Oscar: “Now I know there’s a Santa Claus.” He was figured in two other big hits in ’47, Life With Father and Green Dolphin Street.

Valentine Davies wrote the outline for this classic in 1944 while serving in the Coast Guard. He worked screenplays for popular comedies like It Happens Every Spring and On The Riviera, and also did durable drama duty with The Bridges At Toko-Ri, The Glenn Miller Story and Sailor Of The King. Davies passed away from a heart attack in 1961, just 55. His secretary recalled he died in the middle of a bout of laughter. Right on, Val: Santa would approve.

No, but don’t you see, dear? Some children wish for things they couldn’t possibly use like real locomotives or B-29s.” 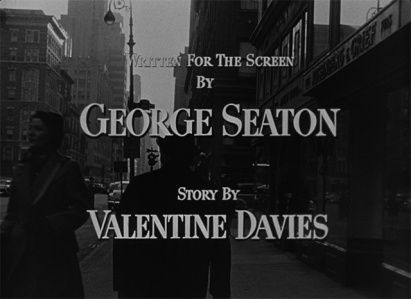 Though 1970s goofy Airport was by far his biggest hit, this is the movie most associated with writer-director George Seaton. His good work as writer included A Day At The Races and The Song Of Bernadette, and as writer-director on The Country Girl and The Counterfeit Traitor.

O’Hara, from “Tis Herself”, her spunky 2004 autobio: “Everyone felt the magic on the set and we all knew we were creating something special. I am very proud to have been part of a film that has been continually shown and loved all over the world… (and)…has endured all this time because of the special relationship of the cast and crew, the uplifting story and its message of hope and love, which steals hearts all over the world every year. I don’t think I will ever tire of children asking me, ‘Are you the lady who knows Santa Claus?’ I always answer, ‘Yes, I am. What would you like me to tell him?'” 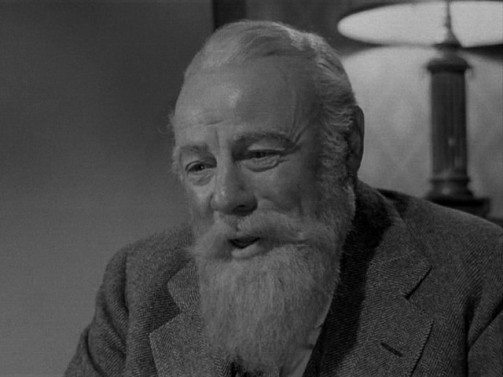