THE FAMILY MAN was the Christmas release for 2000 (okay, How The Grinch Stole Christmas, but that was inflicted in November) and did well, emerging from the chimney into a respectable spot #30 for the year. Not directly, but thematically, it’s essentially an update inversion rework of It’s A Wonderful Life, and if you’ll ease up on tight smugness over comparisons and allow yourself to go with it, director Brett Ratner and his personable cast unwrap a decent present to greet the greedy, needy Millennium. *

Happy with his bachelor life as a high-power Wall Street investment whiz, deal & money consumed ‘Jack Campbell’ (Nicholas Cage) has a fateful encounter with ‘Cash’ (Don Cheadle), guardian angel in disguise, who flips Jack back to the girl he left behind, ‘Kate’ (Téa Leoni) and Jack’s alter-existence as Kate’s tire-salesman hubby in New Jersey, with two kids, a dog and bowling night with the guys. Which Jack will learn and decide when the multiple choice testing is scored?

The type of snurl who turns up their poutsnout at ‘Wonderful Life’, and ‘47th Street‘ won’t sit still for this slickly outfitted confection, but hey, who likes people like that anyway? Let them eat paste. It took a while for this comedy-fantasy with an edge to get past the obvious and win me over, but it succeeded, thanks to the swell bonding of leads Cage and Leoni, and the script and direction not going to anvil-weight on either whimsy or sentiment. It helps with a movie like this if it hits you when you may be reconsidering some of your own life choices.

Jack’s ‘discovered’ daughter and disarming moppet ‘Annie’ has her suspicions about Dad—ANNIE: “Do you like kids?”   JACK: “On a case-by-case basis.”  ANNIE: “Do you know how to make chocolate milk?”   JACK: “I think I could figure it out.”  ANNIE: “Promise you won’t kidnap me and my brother and plant stuff in our brains?”   JACK: “Sure.”  ANNIE: “Welcome to Earth.”

Cage at 36 was in the middle of his decade+ prime, with more hits than misses; he capably essays the various modes and moods of the self-dueling Jack, from arrogant and certain to dazed and confused, finally getting with a universal portfolio bigger and more meaningful than a buyout paycheck. Cage could do frustration eruptions and soulful realizations with few peers. Leoni, 34 here, was batting box-office homers (Deep Impact, Jurassic Park III); she delivers perfect comic timing, obvious smarts, teasing charm and definite radiant sexy cutes. She drew the best notices, and even those who sniped at the illogical aspects of the script gave her a hand. In this role she kind of reminds me of Doris Day (meant as a compliment to both). 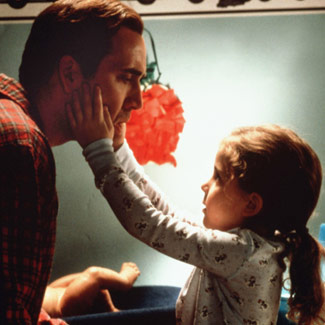 * Though the loud and icksome ‘Grinch‘ stole much of Xmas, #1 with its haul of $345,000,000 (the Home Alone anesthetized crowd and their effects-raised bratlings), the less in-your-puss musing of Nick, Téa & Co earned a tidy $124,760,000, taking care of the $60,000,000 bill.  It hadn’t arrived with the expectations of its vaunted Capra ancestor, which had lingered at a similar position, #28 back in 1946, and was considered a disappointment, and it won’t ever get the kind of reverent following Jimmy, Donna & Bedford Falls eventually developed, but The Family Man remains a shiny enough ornament to put on the tree.