SHADOW OF A DOUBT casts a dark cloud of fear and disillusion over sweet, small town American gal ‘Charlotte ‘Charlie’ Newton’ (Teresa Wright) in the middle of WW2. It’s not bad news from some Pacific island or Italian hill that turns her placid hometown worldview into a swirl of confusion and pain, but the slow-burn reveal of discovery that her beloved and idealized ‘Uncle Charley’ (Joseph Cotten), on a surprise visit home from his apparently successful business deals, is actually fleeing detectives, on his trail for a series of strangulation homicides of well-off widows.

“You live in a dream. You’re a sleepwalker, blind. How do you know what the world is like? Do you know the world is a foul sty? Do you know, if you rip off the fronts of houses, you’d find swine? The world’s a hell. What does it matter what happens in it? Wake up, Charlie. Use your wits. Learn something.” 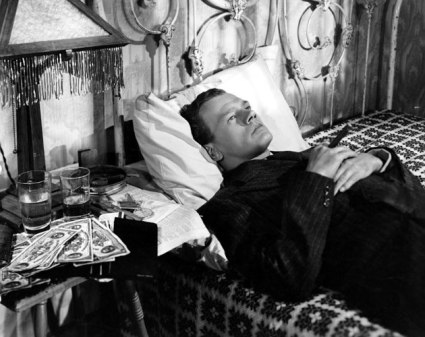 Alfred Hitchcock’s 1943 suspenser was Oscar-nominated for Best Story (Gordon McDonnell), and the script was a three-way job from Our Town‘s Thornton Wilder, Sally Benson (Meet Me in St.Louis) and Alma Reville, Hitch’s wife and collaborator. Reviews of this picture always mention the director considered it his favorite, and it earns consistent high praise. It was not a hit when it came out, in fact it was one of Hitchcock’s least popular movies at the boxoffice, the $3,400,000 gross only squeaking into 87th place that year.

“I can’t face the world in the morning. I must have coffee before I can speak.”

They shot it (with Joseph A. Valentine on camera) in then-bucolic Santa Rosa, California, which at the time boasted a population around 13,000: today it’s upwards of 175,000. Dimitri Tiomkin did his first scoring assignment for the director ((followed by Strangers On A Train, I Confess and Dial M For Murder). Joining Wright & Cotten were MacDonald Carey (about to head into the Marines), Patricia Collinge, Henry Travers and Hume Cronyn, 32 in his Hollywood debut.

Have to part from the herd to a degree on this one. It’s a good premise and Cotten’s  unsettling job as the killer (a neat counter to his generally courtly and self-effacing image) is quite effective, but otherwise I find much of it rather a chore. The gooey sweetness from Wright and Collinge feels laid on, the younger daughter played by 10-year-old Edna May Wonacott grates like so many child actors of the era, and Tiomkin’s loud and insistent score really overdoes it. Again, I’m in the minority (most critics really like all the actresses work here).

Best scene has good old Uncle Charley, in close-up, icily telling the family at dinner what he really thinks:  “The cities are full of women, middle-aged widows, husbands, dead, husbands who’ve spent their lives making fortunes, working and working. And then they die and leave their money to their wives, their silly wives. And what do the wives do, these useless women? You see them in the hotels, the best hotels, every day by the thousands, drinking the money, eating the money, losing the money at bridge, playing all day and all night, smelling of money, proud of their jewelry but of nothing else, horrible, faded, fat, greedy women… Are they human or are they fat, wheezing animals, hmm? And what happens to animals when they get too fat and too old?”

2 thoughts on “Shadow Of A Doubt”