THE RED TENT, put up with lots of hard work at great cost, collapsed as a massive failure when the sex & violence distracted public failed to step into the shade of its old-fashioned adventure.

A $10,000,000 Soviet-Italian co-production, the 70mm version for Russia ran 158 minutes (some sources say it was originally 3 hours, 25 minutes), with the 35mm international cut chopped to 121. Premiering in Italy for Christmas 1969, it didn’t navigate to the States until 1971, when it folded after a few weeks. It took yet another year to reach Britain. Partially it was a case of Paramount blowing it, but it also arrived at a time when audiences were keener for more ‘relevant’ fare.  Cogerson lists it 93rd for ’69 but how they back-factored from ’71 we can’t say. At any rate the icy take of just $2,000,000 made it a colossal and undeserved flop. Connery certainly didn’t need the bad news, following the box-office disasters of Shalako and The Molly McGuires. 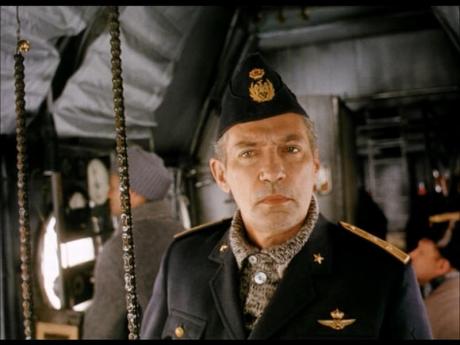 Too bad, after 62 weeks of filming, most of that on arduous, frigid location shooting in Estonia, the Baltic Sea, Franz Josef Land, and Norway’s Spitzbergen Archipelago (now known as Svalbard). Cast and crew endured months of wet and wind-chilled Arctic conditions, sometimes working in -30 degree temperatures. While Connery got top billing, he was only in a few scenes, and those were done over three weeks in Moscow: Finch was on duty for nine months. Claudia Cardinale was added to provide some fictional love interest as  ‘Nurse Valeria’, and rugged, reliable Hardy Kruger gets a colorful part as a cynical aviator (the daring Einar Lundborg). 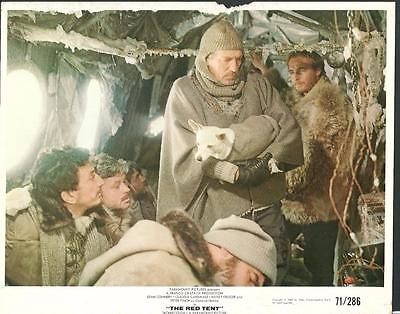 The script, by Ennio De Concini & Richard Adams, with uncredited assistance from Robert Bolt, was originally worked by Yuri Nagibin from his 1960 novel about the event, but five attempts at scripting his 625-page tome wore him out, and he clashed with producer Franco Cristaldi, who demanded a woman in the all-male story. That the lady happened to be Claudia Cardinale, who also happened to be Cristaldi’s wife, well, that’s show biz, plus he was putting up 40% of the dough. She adds little to the film beyond the glow of her beauty, and the daffy scene with her and co-star Eduard Martsevich madly cavorting in the snow looks like something out of a spoof. That they acted joyous performing it is a tribute to their professionalism, as the wind and snow were paralyzing.

There are exciting big-scale sequences of the dirigible wreck (the Italia), of a Soviet icebreaker smashing its way through the frozen sea, of crowd scenes and in the daunting splendor of the ice floes, bergs and overall environment. Connery, done up to appear older (he was 39, Amundsen was 55) and blond, is fine–he has the best dialogue, near the end. But acting-wise the film surely belongs to Finch, 52 at the time, who has one of his best, most challenging, least appreciated late-career roles. Nobile, who’d been 43 during  the event, was still alive when the film was done; he died in 1978, aged 93.

The telling is hampered by using an awkward framework, set in the 50s, with Nobile in his Rome apartment plagued by imagining a jury of those who perished or were part of the rescue attempts, arguing over his responsibility or guilt for the mission’s mishaps and decisions. The cast make do, but the staging comes off stilted, and shifting suddenly out of the location work to the obvious indoor sets breaks the spell. Ennio Morricone’s score is another debit: the normally intuitive composer delivers one of his least-inspired soundtracks.

Directed by Mikhail Kalatozov (The Cranes Are Flying), his last film. With Mario Adorf, Massimo Girotti and Luigi Vanucchi. Buffs may detect the voice of Robert Rietti, dubbing at least three members of the cast. Flaws and all, it’s a good adventure film. 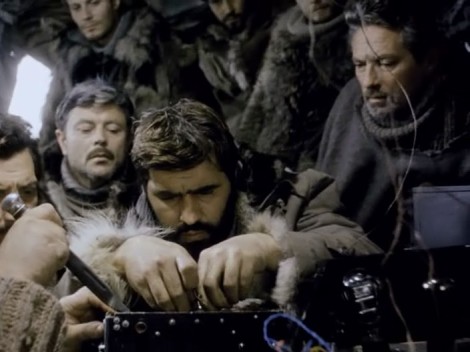 One thought on “The Red Tent”