Two frankly sexy stars (Gary Cooper and Marlene Dietrich), both 28, hot to trot and bound for glory.  A domineering, idiosyncratic director (Josef von Sternberg), creating a motif of memory-imprinted images to tell/sell a story more than dialog or irksome plausibility.  Foreigners being foreign!

“Every time a man has helped me, there has been a price. What’s yours?”

Lanky 6’3″ Montanan Cooper had already swooned hearts and won buddies in Wings, The Virginian and The Winning Of Barbara Worth.  German starlet Dietrich (Marie Magdelene Dietrich– God’s sense of humor in evidence) struck notice among film cognoscenti with von Sternberg’s controversial The Blue Angel.  Aware that far-off Berlin was a go-to hotbed of all manner of libidinous debauchery, when home-grown crowds saw this leggy chanteuse not only minx Coop but plant a lip-lock—on a dame, while done up in a tuxedo, it must have sent push-me/pull-you shivers through Mayflower-compacted, Hoover-reamed colonials.  Soon enough, real degenerates would run the table in Germany, run talents out, run harmless urges into a meat-grinding malevolence. But that was a few years down the road. Look at them gams!

“There’s a foreign legion of women, too. But we have no uniforms, no flags, and no medals when we are brave; no wound stripes when we are hurt.”

Mysterious Morocco, the late 1920s. The French Foreign Legion takes time between marches to lech in the casbahs and cabarets of Mogador. World (and men)-weary nightclub singer ‘Amy Jolly’ (Dietrich) easily wins the Hearts and Groins of womanizing soldier ‘Tom Brown’ (Cooper) and rich-whatever ‘La Bessière’ (Adolphe Menjou, about as enticing a stick of man-candy as a husk of flax).

The creaky screenplay from Jules Furthman doesn’t flatter logic. Both Gary and Adolphe fall bang in ‘love’ with Marlene in bullet speed, with abrupt reversals of course turning on a franc.  Private Cooper’s casual–and accepted!– insubordination to officers is something new in the history of History. And yet… 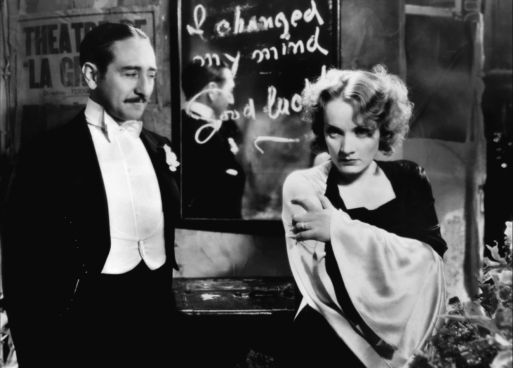 …while the stars, in these a-borning days of talkies, haven’t quite polished their vocal instruments, they strike sparks off camera magnetism alone. Innuendo gets worked. Lee Garmes hazy cinematography and the atmospheric art direction add to the intimacy. Dietrich shows off to better advantage than the men, with that teasing tuxedo bit and the risque girl-smooch, plus the famous Marlene legs get ample display. The storybook finale is silly, overboard as heck, yet is somehow just right in its archaic simplicity, both artistically beautiful and emotionally satisfying.

With Ullrich Haupt, Eve Sothern, Francis McDonald (snarling) and Paul Porcasi (sporting an earring big enough to hang a palm on). So much cigarette smoking goes on you may need a checkup afterwards, and von Sternberg allows two too many reprises of the Legion’s familiar marching tune. The otherwise spare music score is from Karl Hagos. Uncredited were cameraman Garmes’ young assistant, Lucien Ballard (The Wild Bunch) and von Sternberg’s 2nd-unit director, Henry Hathaway. Dietrich’s Oscar nomination was the only one she ever received. 92 minutes.

* Debonair preener/knave Adolphe Menjou, 40 in Morocco, had already logged 71 of his career’s 150 credits when this rolled out. Voted the “Best Dressed Man in America” nine times, he was one of the most virulent Red-baiters of the Blacklist Era.  Fitting, then, that his best performance came as one of the aristocratic generals in Paths Of Glory. The daring Dietrich’s choice between the mildewy Menjou and the confident Cooper is a no-brainer. Shuck those high-heels and hit that 140-degree Sahara sand, liebling. 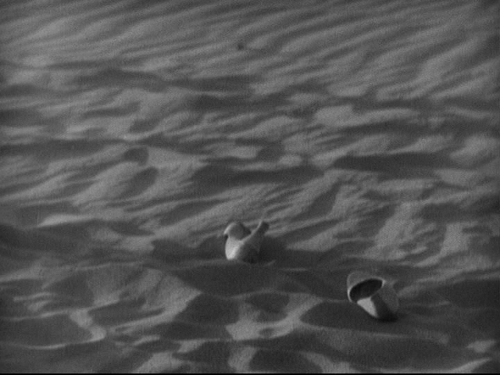