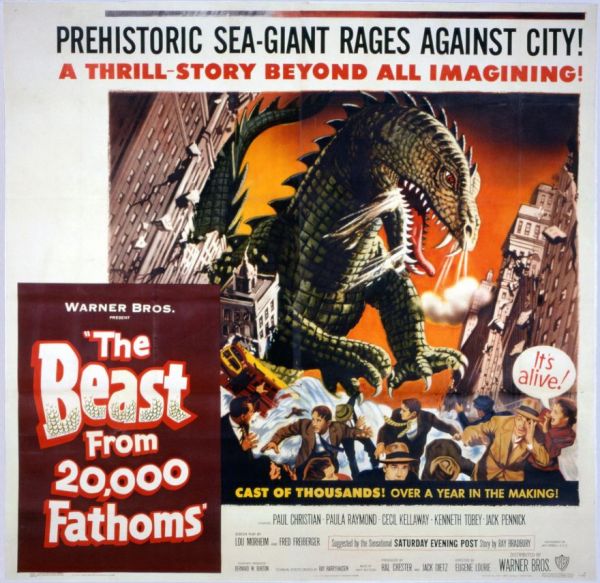 THE BEAST FROM 20,000 FATHOMS ,awakened from a peaceful icy nap by clumsy humans and their silly atom bomb, reared its angry prehistoric noggin in 1953. Thanks to the confluence of great talents, a couple of big apes and the brave new world of fission explosions, kids of the 50s and 60s (those watching this agog on Saturday TV) were raised on a high-Geiger, low-probability diet of giant creatures who didn’t like man or any of his structures. This ‘Rhedosaurus’, for example, starts with a lighthouse and fishing boats, then moves on to Manhattan and the National Guard (and one really unlucky, brave but not-too-smart cop).

Right off the bat, a narrator informs us “This is Operation Experiment, a secret base far north of the Arctic Circle. Experiment was the codename for a top priority scientific expedition. These men arrived here on X-day minus 60. It has taken them the full two months to get ready. Today is X-day.”  To halfquote a halfwit, “What’s the use of having these nuclear weapons if we don’t use them?”  A physicist (Paul Christian) beholds the flash-boom test results and no-one believes him, until he convinces a doddery paleontologist (Cecil Kellaway) and the dino doc’s handy assistant ‘Lee Hunter’ (Paula Raymond). Bring on the drawings!

Kenneth Tobey—or Skeptical Air Force Pal ‘Col. Jack Evans’ —gets with the picture when the monster, who’s already gulped down a diving bell and occupants, starts crushing cabs in New York City.  Bazookas are employed, but they just make things worse, since the nicked rampager is also poisonous, his blood spatter spreading a deadly virus. Only a “radioactive isotope” can stop it (delivered via a rifle grenade—in a subtle way the movie connects atomic benefits with military hardware, teaching the kids invaluable stuff to unlearn when it was too late). The sniper who gets the kill shot is 28-year-old Lee Van Cleef.

Running a succinct 80 minutes, the little classic was brought to bay for a thrifty $247,000, directed by Eugène Lourié.  The creature was designed and its ingenious stop-motion effects created by Ray Harryhausen, in his first solo feature project, after mentoring under Willis O’Brien. The 1949 success of Mighty Joe Young (Ray working under Willis) and the popular re-release of O’Brien’s King Kong dovetailed with a concurrent public nervousness over H-bomb tests and things scientific/scary-in-general (The Thing, The Day The Earth Stood Still). The script owed much to a Ray Bradbury short story: the two Ray’s were lifelong friends. Warner’s added a quarter million bucks worth of advertising and the payoff was 35th place for the year, with a gross of $6,800,000. The Giant Monster Era was upon us. *

* “What the cumulative effects of all these atomic explosions and tests will be, only time will tell“, sage words from one of this movies science guys. From hapless rural folks in isolated country stores (Them!) to massed panic in Tokyo (you know who), the relative calm of the Eisenhower years witnessed assault from ants, spiders, octopi, leeches, a mantis, a gila monster, Martians, molemen, brains from Arous and John Agar. Add the TV releases of the Universal fiends of the 30s and 40s, and it was a great time to be young and curious.

For ‘rhedosaurus’, see dictionary for Pretend Dinosaur: names, found on same page as ‘Rodan’. “Oh, kitten”, (kindly professor uncle chuckles, removes pipe, says to stacked niece) “FYI, a fathom is six feet. Twenty thousand fathoms would be 23 miles: the deepest part of the ocean is seven.” Trying to discern where my math issues began, it may have been puzzling over another blithe use of twenty thousand, 20,000 Leagues Under The Sea—a league being “any of various units of distance from about 2.4 to 4.6 statute miles (3.9 to 7.4 kilometers)”: so the Nautilus went, like, 92,000 miles? Was…was Walt lying? Must have been that French Verne guy.

The stalwart Kenneth Tobey had already electrocuted The Thing and would be called upon to save Fisherman’s Wharf from It Came From Beneath The Sea. (trustworthy Air Force colonel name ‘Jack Evans’ used because ‘Ken Peterson’ was in Korea?) Eugène Lourié would later steer the fury of The Giant Behemoth and Gorgo. The wonders conjured by the great Ray Harryhausen made for many happy matinees…. 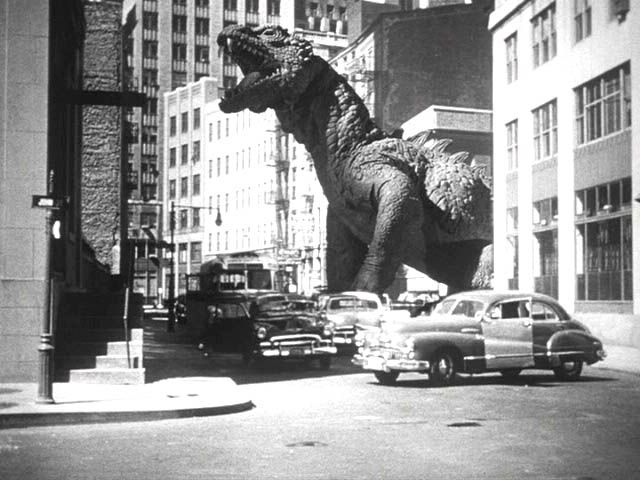