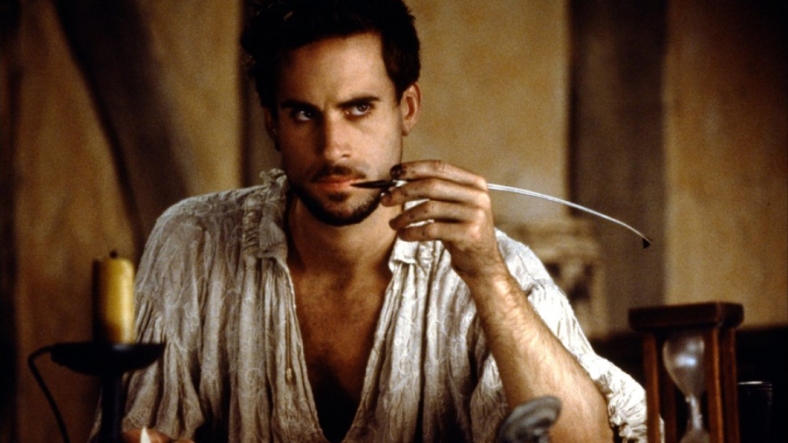 SHAKESPEARE IN LOVE yielded sonnets of critical praise and a strong-arm publicity blitz from Harvey Weinstein saw that the comedy was garlanded seven wins from thirteen Oscar nominations. Its smart framework, knowing humor, winning cast and deathless romance caught public fancy as well, reaping $289,318,000, #9 among a strong lineup from 1998. * 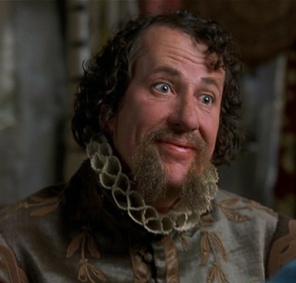 London, 1593. There’s always the plague, but the pox that bedevils Will Shakespeare (Joseph Fiennes) is writer’s block, flummoxing the young playwright over what to do in his partially-baked “Romeo and Ethel, the Pirate’s Daughter.” Harried theater owner Philip Henslowe (Geoffrey Rush) presses him, and a jealous, thick-headed nobleman, ‘Lord Wessex’ (Colin Firth) wants not ink from Will’s quill but blood spilled from his arteries, since the scribe has fallen hard for the titled brute’s comely betrothed (Gwyneth Paltrow).  Repelled by the clod Wessex, she falls a-swoon for Will, and disguises herself as a man to join the cast of variously-talented players who attempt to tackle the in-progress material. Queen Elizabeth I (Judi Dench) may be in the audience. The cast excel.

A decade in gestation (a few weeks before shooting, Julia Roberts bailed, after sets were built in 1991), the script started by Marc Norman was re-done by Tom Stoppard.  Along with director John Madden, they crafted a stellar mix of period manners (great production trappings), bawdily funny farce, deft contemporary allusions, and enough longing and fate to brush the humor with star-crossed romance. Fitted in between jibes, swordfights, cross-dressing, social intrigue and a host of cleverly placed references to numerous other Shakespeare plays, the eternal draw of Romeo and Juliet’s poetry comes through with beauty intact. We sure do love watching Love That Cannot Be, almost as much as we actively wish for a chance at it. **

* Some growling resulted—has never really ceased—when this lighter-themed material took Best Picture from the wracking intensity of Saving Private Ryan. While hardly in the same sour grapes league as the venomous poor sporting demolition of Crash against Brokeback Mountain, the miff-tiff over Spielberg vs. Shakespeare tarnished the victory factor. Six-to-one, they’re both excellent. This one is certainly cheerier. To be clear, I’m not a Gwyn-hater—what’s up with those witches?—, but I do think Cate Blanchett’s full-bore Elizabeth shaded the pleasing Paltrow. Speaking of hateful, The Pig Formerly Known As Harvey Weinstein conducted the Oscar campaign for this film with the ruthlessness of Spielberg’s Nazis on Omaha Beach.

** Neat quote from the craft-conscious, star-indifferent Joseph Fiennes: “I’ve always believed that you shouldn’t want to mend a broken heart, because that’s someone you don’t want to forget. Scars can be good.”