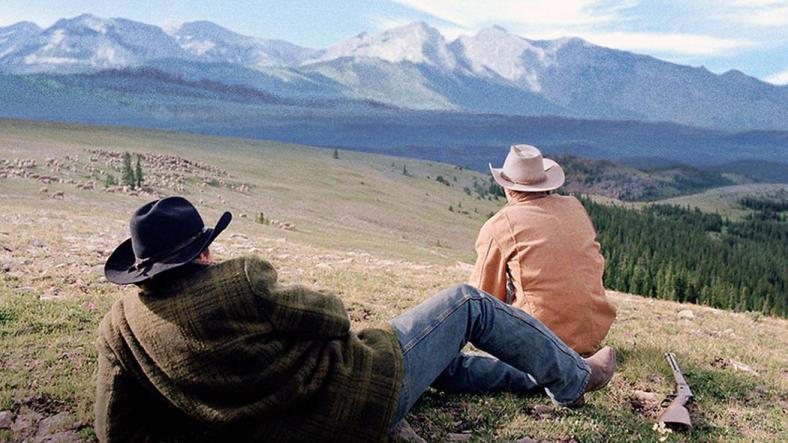 BROKEBACK MOUNTAIN—-unspoiled scenery and fresh air to the side, I can think of happier places to take a vacation. As to the company, ditto. Is it okay to say that? No, wait, hold them horses (er…sheep): are you plumb loco? Of course it isn’t, because the The Law demands otherwise. Law? Yep, the Self Congratulatory Politically Correct Edict of March 5, 2006.  That’s when this splendidly shot, sympathetically performed but sluggish and internally synthetic 2005 drama lost the Best Picture Oscar to Crash, setting off the noisiest case of sour grapes flatulence since George III bummed the Divine Right crowd by boobing America to some farmers. Hang on—don’t choke on them campfire beans: it’s a good movie. It’s just not a great one. *

Carefully directed by Ang Lee, the tragic twenty-year forbidden love saga of ‘Ennis Del Mar’ (Heath Ledger) and ‘Jack Twist’ (Jake Gyllenhaal) was scripted by Larry McMurtry & Diana Ossana into a 134-minute realization of a fifteen-page short story written by Annie Prouix for “The New Yorker”. The rough slightness of the piece notwithstanding, Ms. Prouix is often a keen observer of complicated people in difficult places (her “The Shipping News” became an excellent movie), while the legendary McMurtry and frequent writing partner Ossana can “talk ‘West'” with the best.

“Bottom line is… we’re around each other an’… this thing, it grabs hold of us again… at the wrong place… at the wrong time… and we’re dead.”

The durn thang is—even with a corral full of subtle, layered details, cinematography so location-redolent you can almost scent the trees and breeze, mostly damn good acting, and a heart both on its sleeve and in the right and overdue place—beneath the fervent grappling and stoic declamations are two lead characters with so little warmth and appeal that it’s difficult to see what would draw them together, or anyone else to either. We have to infer it, as there’s scant display in manner or behavior by these dullards indicating why they would convect heat from the kind, vivacious, basically knockout keepers so convincingly played by Michelle Williams, Anne Hathaway and Linda Cardellini.

As good as Ledger & Gyllenhaal are (very good, though Heath’s mumbling often skirts the Brando County line), the script only gives them so much rope to lasso character, and not enough to cinch commiseration. The best, most telling performances come from the shattered Williams and flummoxed Cardellini. Framing it all is Rodriego Prieto’s striking cinematography, especially the serene hilltop and valley vistas.  The shoot was accomplished in Alberta’s southern Rockies, subbing for the Wyoming setting of the story.

Lee won an Oscar for his painstaking direction, McMurtry/Ossana another for their 50/50 screenplay and Gustavo Santaolalla picked up a third for his spare, plaintive music score. Along with the nomination for Picture, Hedger was on the roster for Best Actor, Gyllenhaal for Supporting Actor, Williams for Supporting Actress and Prieto for his camera work.

Made for $14,000,000, plus another $5,000,000 spent on advertising. Indisputably the passionate, occasionally affecting film struck a chord, many chords: reviews were  rhapsodic and the registers rang up $178,100,000. With Randy Quaid, Kate Mara, Anna Faris, David Harbour, Roberta Maxwell, Peter McRobie, Scott Michael Campbell and Graham Beckel. They’re all very good. 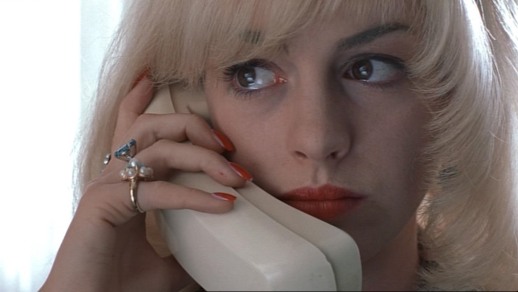 *  Same year affairs this rustler would rather bunk down with: Kingdom Of Heaven, Munich, Cinderella Man, Hustle and Flow, The New World, Syriana, Good Night and Good Luck, King Kong, The Constant Gardener, Transamerica, Junebug, War Of The Worlds, Match Point, The Squid and The Whale.  Ang Lee’s sensitively wrought project and his committed cast are good enough, flaws and all, to ride shotgun on merits, but the wind tunnel of breathless and insistent hype shrouding it can go shovel out the barn.

Speaking of forking manure, a quote from Annie Prouix: “I wish I’d never written it…. [These fans] think that just because they are men, they understand men better than I do.” Gosh, on behalf of a paltry 3,830,000,000 men, I have to thank the thrice-divorced sage from Vermont who wrote 15 pages about bisexual shepherds for a magazine that has a circulation that reaches approximately one of every 7,102 people on the planet. Enlightened, I must somehow try to sleep tonight, and keep the tent-flap zipped—if that’s okay… 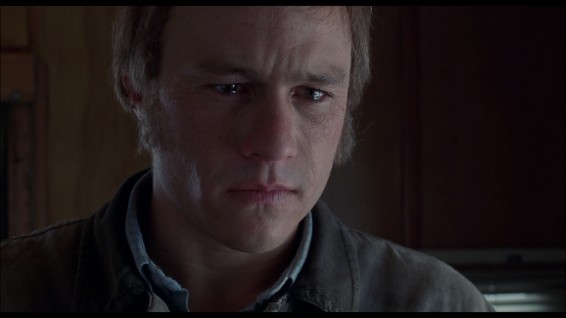 One thought on “Brokeback Mountain”