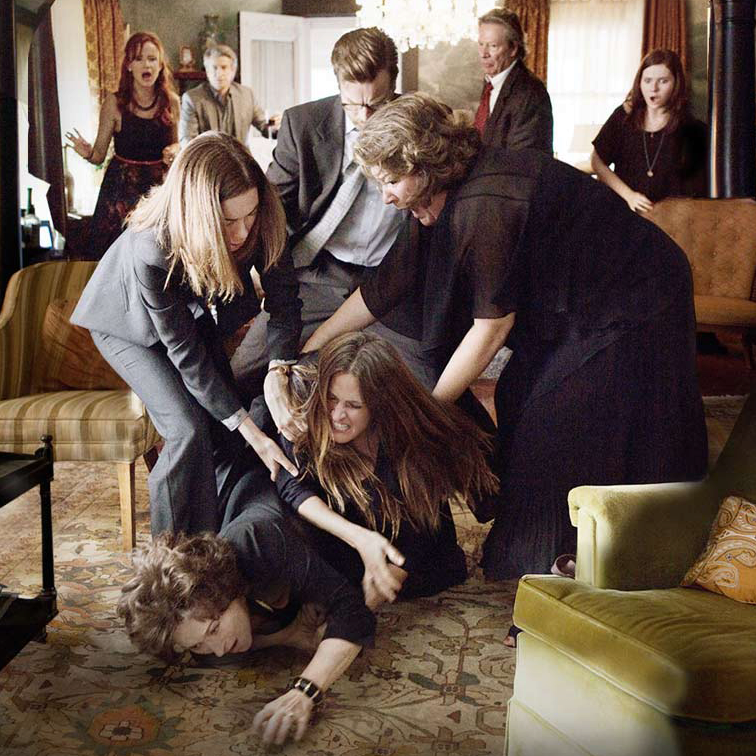 AUGUST: OSAGE COUNTY plays host to a family dynamic that could have been spawned by mating Lucrezia Borgia with Saddam Hussein. It also gives venting room for some of the best ensemble acting and blistering individual explosion-meltdowns in the Home as Hell pantheon. The fractured bayou broods of Tennessee Williams and soused, sniping academics of Edward Albee seem like the Cleaver’s and Ozzie & Harriet next to the Oklahoma tornadoes of the Weston family, conjured by the script Tracy Letts pared from his Pulitzer winning play. The scorched and cloud-scudded Midwest they seethe in might as well be Middle Earth under assault from Orcs: you’d find more allies there.

When Dad (Sam Shepard) checks out, the three grown daughters of ‘Violet Weston’ (Meryl Streep) gather themselves for confronting her over their past (bleak), her present condition (cancer and addiction to pills) and the pregnant-with-foreboding future. The loyal but ravaged girls (Julia Roberts, Julianne Nicholson and Juliette Lewis) bring along their variously problematic men (Ewan McGregor, Dermot Mulroney and Benedict Cumberbatch). Other related combatants include Margo Martindale, Chris Cooper and Abigail Breslin. Observing in stoic dignity is Misty Upham. No guns in the house, but enough verbal ammunition flies over the 130 minutes to restart the Civil War. It’s not all heavy; much of it is witheringly funny in a deep, dark way. A helluva script.

Directed by John Wells, the acting from everyone involved is stellar, highest honors going to a bile-ridden Streep and an unleashed, lacerating Roberts: both nominated for Oscars–Actress and Supporting Actress. The $25,000,000 effort yielded mostly positive reviews and a worldwide box-office take of $74,200,000, 78th place among features released in 2013. 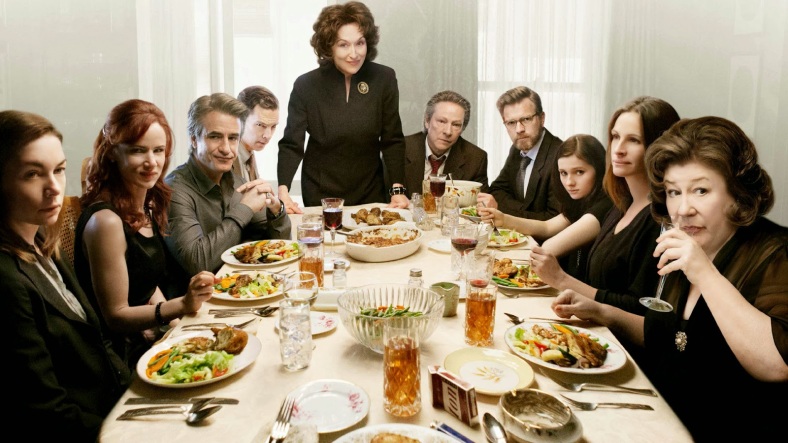