CUBA begs for “Close, but no cigar”, but in a when’s-it-going-to-get-going? 122 minutes, this 1979 non-starter doesn’t even reach close.  Despite a viable cast in a ripe historical setting, beyond some pretty cinematography and a bulging passport’s worth of destination detail stamped in by the director, it barely approaches lighting up, let alone smoking.

Richard Lester had a sort of free-form idea to direct a story set in the 1959 Cuban Revolution: clashing politics and ill-starred love entwined with adventure in an exotic setting. Arriba!  His favored collaborator Charles Wood tackled (more like tripped) the screenplay.  Their tried & true elements (weakly hearkening to Casablanca)  leisurely, then maddeningly never gel around a coherent core: the host of characters, mostly unlikable to start with, are badly drawn, the dialogue often terrible. Lester’s spin-the-Bacardi direction gets the casual Latin Caribbean flavor of corruption down in a shower of throwaway atmosphere moments (though most are so fast they’re more showy than telling) but he staggers rum-drunk with pacing and in handling the cast. When the action shows up near the end, he blows it—and whatever promise the the film held out turns into a cheating joke. *

How do you muff it with Sean Connery (looking dapper as hell at 48) as a jaded-yet-thoughtful mercenary?  He’s come to Batista’s Cuba to help the dictator’s hapless army fight Castro’s guerrillas. His old flame (Brooke Adams) runs a sugar factory with her swinish playboy husband (Chris Sarandon) that a gross Ugly American (Jack Weston) wants to buy.  Scheming, bribing and two-timing among them are Martin Balsam, Hector Elizondo, Denholm Elliot and Lonette McKee.

The love story between Connery and Adams (looking good, acting not-so) is ridiculous; the writing for their scenes is putrid. Others have difficulty with convincing accents (meaning they are not convincing), or are allowed to flail like they’re making up their own lines. The concluding battle scene involving some tanks in a cane field is a recipe of contrivance. Did anyone else but me notice that when Sean and Weston commandeer their tank, it apparently has only a single crewman?  WTF?  The flat-tire finale completes the audience betrayal of a Revolution movie that revolts against itself. Connery manned three movies that year, and all faltered at the box office: the amusing The Great Train Robbery chugged at #49, the disaster that was Meteor plunged to #60, and this splashed daiquiri was downgraded to a tropical depression at #98. 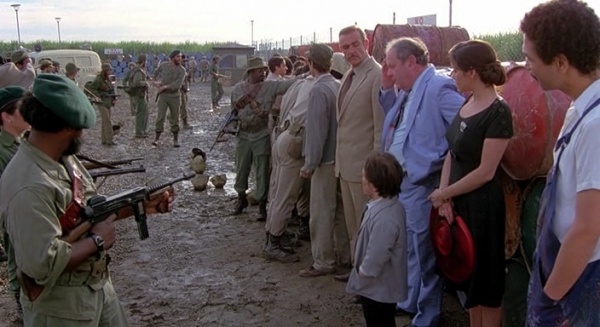 With Danny De La Paz, Alejandro Rey, Walter Gotell, Louisa Moritz (va-voom but needless sex-distraction as a US-blonde-bimbo stripper—like Havana lacked any?) and David Rappaport. The fine camera work is a credit to another Lester standby, David Watkin, who lensed on locations in Spain, where the unchanged architecture looked more Cuban than Cuba: Cadiz and Granada. ** 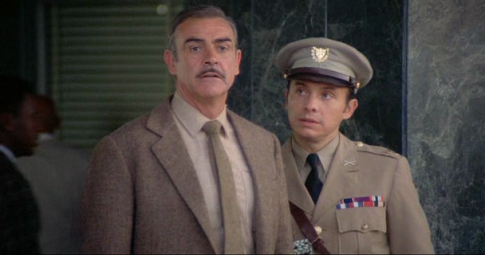 * Viva Cuba Libre! Movies about our festive, restive, suggestive, progressive island neighbor (“our” speaking as a Yankee, albeit hopefully a nice one–Viva Fidel!) include the fun Alan Ladd adventure Santiago, Errol Flynn’s sad misfires The Big Boodle and Cuban Rebel Girls, the okay Havana with Robert Redford, Andy Garcia’s forlorn The Lost City, the trounced Che! of 1969 and the superb two-part Che from 2008.  Plus The Godfather Part II, Before Night Falls, Seven Days In Havana, Una Noche, A Message To Garcia, The Buena Vista Social Club……Meanwhile, the Cuban-American experience has projects as varied as Scarface, The Mambo Kings and The Perez Family (all hail Marisa Tomei).

** David Watkin (1925-2008) cast a sultry glow on Cuba, his last of eight films for Richard Lester (highlighted by The Three Musketeers). Other credits include Catch-22, Chariots Of Fire and winning an Oscar for Out Of Africa. He also did the fab title sequence for Goldfinger, thus ensuring I will buy him a pint in the next life.  An autobiography bore the great title “Why Is There Only One Word For Thesaurus?”  Nearing death, he offered this: “Above all, I am surrounded by love, and its little brother laughter, and I am happy. I don’t even have a problem with death. Pain is at an end, and we, who love, and are loved are always part of each other’s lives.”

One thought on “Cuba”